The Ultimate Capitalist may very well be Bill and Hillary

Login to Send a Private Message to Bobby Tony
Arguably, the Clintons are the most Capitalistic couple who have ever been in the White House.

They have accumulated a great amount of wealth after Bill left the POTUS office. They and others have set up a tax free foundation. It is my belief that our entire "tax free foundations" system is nothing more than a scam on the average American taxpayer. That is the subject for another post but the best way to hide large sums of income is to set up a tax-free foundation and hire your friends and relatives to help you administer it. I will let you Google it if you have more interest in this scheme to keep from paying taxes.

I have no problem with them earning money. My concern is not envious of their ability to garner large sums for making speeches. Many ex-presidents have done that. Where I do have a problem is that there may be a nexus between donors or paid speeches and governmental action.

This is not limited to Democrats or Republicans. A widespread incestuous system that has developed in our elected officials allows them to peddle influence and favors in return for laundered money in their charitable foundations, future income, or campaign funding. I am not so naive as to think that this does not go in the business world. It does and it is not a fault in the capitalist system, it is a prevalent in all forms of government including communism and the European socialism model. It is human nature act in your own interest. The rich will always have more influence in human society, but in a capitalist system, they will also provide more employment and income to the private sector.

Here is the link to the data above

If you deduct the Military personnel from the total you end up with 2,726,000 of which the vast majority is in the executive branch.

Does there appear to be something wrong with this scenario? To be fair the number of total employees has been fairly stable since 1992 ( see link above) through both Democrat and Republican presidents.

I may be a bit pious in my condemnation of this practice but given the chance to make money with a wide legal interpretation of the law or tax rules, I suspect most people would weigh the cost versus the risk. If you have ever filed a 1040 long form tax then you probably fall into category that some would say were loopholes in our tax system. If you have ever taken a deduction for anything on your tax form above the standard deduction and exemption, then you are a beneficiary of a preferential tax break. We humans are always willing to point the finger towards the other fellow or company while quietly accepting any benefit we can get.

The biggest complaints will always come from those that lose a special depreciation or deduction while they complain about the large corporations getting tax breaks. Our entire tax system is income based. We used to say that our Income tax was voluntary but that was never true. Filing taxes is mandatory but the voluntary part was telling the government how much you made that they could not easily track. The whole withholding from salary is to allow the government to track income and check against reported income. Every year there are more regulations instituted to allow the government to test the honesty of the taxpayers and their claimed deductions.

Most liberals will say we should track and prosecute the tax cheats. If that were possible, who do you think would serve your next meal or bar drink? Why is it that we always complain about the guy who is just a little or a lot better off than us? Most of those people are "off-book" income earners. Have you ever paid cash for goods or service? You may be dealing with a tax cheat there as well. I was always amused when I went to a Chinese restaurant and the receipt was hand written instead of a cash register receipt. Reconciling the end of day sales was easy. Next time you eat at a non-franchise family restaurant or bar. Look at how they handle your payment. Credit cards must be counted since they are traceable but cash payment may not be traceable. No system of tax will be able to catch 100% of the tax cheats. But doesn't it seem like the simplest system is the one that allows the least cheaters?

I doubt if many would approve of a nosey neighbor looking over your shoulder when you do your income tax. Why would you allow an overbearing Uncle Sam to do the same thing? Any system that is geared to tax based on productivity is a system that was designed to control the public not raise money.

Normally this is where you would expect someone point out that the government needs to collect taxes to pay for its programs. Are you kidding me? We run a deficient every year and just add it to the total debt we pot. That is the pot at the end of the rainbow, a pile of IOUs. Others would point out that we had a surplus under President Clinton and balanced the budget. Really? See this from CNN -Bill Clinton Legacy of Mythology and Surplus. Don't fall for the trick politicians use when discussing deficit and debt. 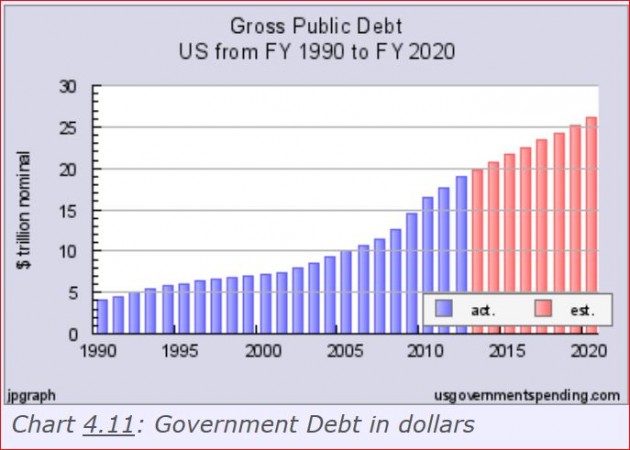 The point I am trying to make is hat under our modern system there is really no correlation between revenue collected and money spent. We continue to spend far above our collections. If that is the case, then why don't we just simplify how we collect taxes since we don't use the money to pay off any debt. If you have a balance on your credit card of $30,000 your minimum monthly payment would be somewhere around $250 per month (Using the most generous rate assumption). What if one month you have an extra $100 that you can apply to your credit card bill but you decide to have a nice dinner to celebrate your good money management. You charge the dinner on your credit card and buy $100 of lottery tickets. You now owe $30,000 plus $100. Is your budget now is balance?

I contend that collection of taxes (revenue) and controlling spending (expenses) is two totally separate and distinct subjects that are no longer related to each since we have the ability to issue IOU's to anyone willing to take them. We can also print more money when needed. Printing money just devalues the money that is currently in circulation.

There is a simpler way to collect taxes but it will require us to take back our government. My favorite is The Fair Tax.. Most of the criticism on this tax is the rate necessary to make it revenue neutral. That seems to me to indicate that our current level of spending is sacred and unalterable.

Naturally, The Fair Tax is subject to abuse as well as our current income tax. Nevertheless, doesn't it seem reasonable that a simple system is more easily audited and regulated? A sales tax is more easily tracked and audited than an income based system. Every State in the Union has a sales tax and apparatus for collecting it. One of the other benefits is that the tax is collected locally and then sent to the Federal government instead of collected nationally and sent back to the states with strings attached.

The Fair Tax in 1 Minute

All right smarta$$, you ask, what is your solution. I don't need to have a solution to this problem. All I need is the ability to personally prepare for the time when reality meats illusion. I don't know when that will be and I don't know if it will be in my life time but I do know you can't eat paper (money) and you can't convert paper (IOUs) to food and shelter when the $h!t hit the fan. Our parents and grandparents seem to have a solution. They tried to be self-sufficient and debt free and it still did not insulate them from the failure of government to control its tendency to try and manage the economy. Today some liberal would say that they were unfairly hording food or staples that the rest of us need.

Again I use my old man's basic truisms that went something like this.


Little man so spick and span
Where were you when the $h!t hits the the fan

He always followed this up with his simple life experience.

"Don't worry about who is to blame when the $h!t hits the fan there will be plenty enough to go around for everyone".

I know I should feel better after this rant but somehow, I don't.