And we also get Mel Gibson. Astonishingly, it was a most interesting combination.

This film, by Actress Jodie Foster who also directed, was produced during the time when Actor Gibson was having his last round of 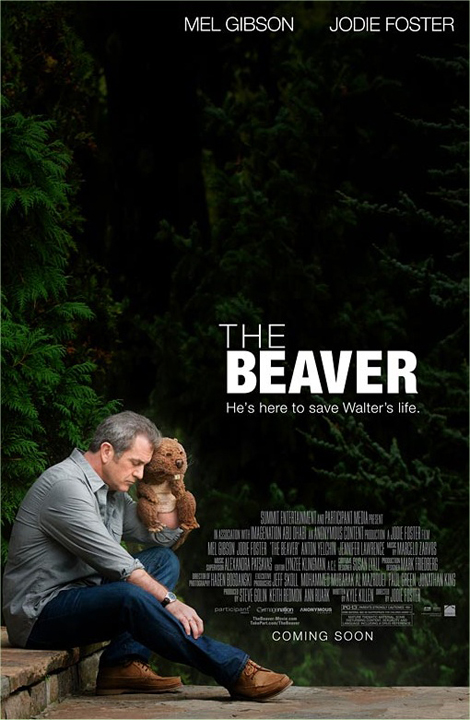 domestic skirmishes in his own home, and public opinion for the celebrated actor was at an all time low. Needless to say, the film did terrible at the box office, which was sad because "The Beaver" is actually a good film about the extreme sadness of schizophrenia, with spurts comedic relief tossed in for good measure.

Regardless of what one might think of Mel Gibson as human being, and let's face it, the public at large can be rather harsh in their judgments, he is an outstanding actor and director. As a professional, the man has a clarion view of what he wants to achieve on film, and irrespective of one's perception of his success, Actor Gibson is dedicated to his perspective that he wishes to project. Sadly, Mel's longtime friend, Director Jodie Foster, saw her estimable efforts punished as well. Still, it was a good film.

The film begins with Mel Gibson's voice, heard in narration, describing the fate of his character as such:

"This is a picture of Walter Black, a hopelessly depressed individual. Somewhere inside him is a man who fell in love. Who started a family. Who ran a successful company. That man has gone missing. No matter what he's tried, and he's tried everything, Walter can't seem to bring him back. It's as if he's died, but hasn't had the good sense to take his body with him. So mostly what he does is sleep."

As intimated by Actor Gibson's narration, the film's leading man is beset with the terrible suffering of acute depression, the kind that is so extreme that suicide sadly becomes a viable option for some. The problem for Mr. Gibson's character, Children's Toy Executive Walter Black, is that he is poorly accomplished at completing the task of his self-demise.

Ultimately, his poorly executed efforts leave him in a crumpled, drunken, half dead stupor on his bedroom floor, and when he awakes, he is lying next to a battered hand puppet of a beaver that caught his eye in a dumpster behind the liquor store. Remarkably, when Walter puts his hand up the cavity of his furry friend, the puppet comes roaring to life, and with a cockney accent (Actor Gibson rightly does the puppet's voice, which is oddly reminiscent of a young Michael Caine). 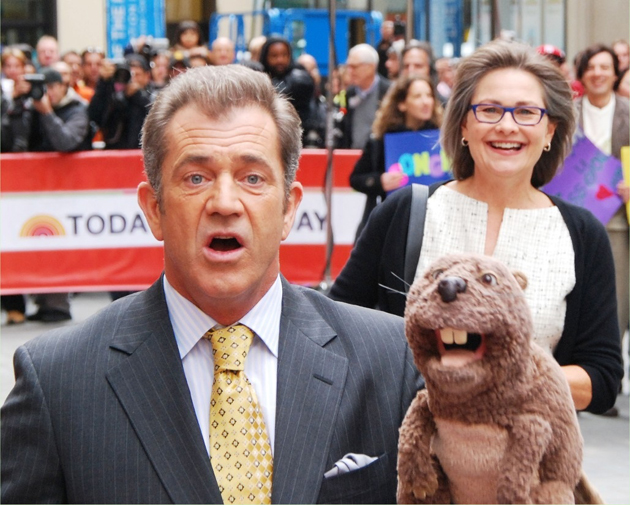 Walter Black, inextricably connected to The Beaver, has a great measure of success with his new friend - even speaks to Matt Lauer as a guest on the "Today Show."

The furry inanimate, now fully animate, puppet also begins to take over his life, and this is where the schizophrenia begins to seep into Walter's psyche. The dispirited toy executive's psyche is so crippled that in the onset of the willful puppet's claim on Walter's soul, he consciously accepts the assistance of the much wiser, and better spoken puppet, who is appropriately known as the titular "The Beaver." Walter's desperate invitation to the puppet's invented persona will become analogous to the demon that assumes the human core of its host. At some point, to have some semblance of a happy ending, there will have to be an exorcism. Sadly, his co-dependent family will be inextricably involved.

Using some measure of cunning to find his way back into the fabric of his family, Walter Black / The Beaver hands his wife, Meredith, a prescriptive note, which she reads:

"Hello. The person who handed you this card is under the care of a prescription puppet, designed to help create a psychological distance between himself and the negative aspects of his personality. Please treat him as you normally would, but address yourself to the puppet. Thank you." 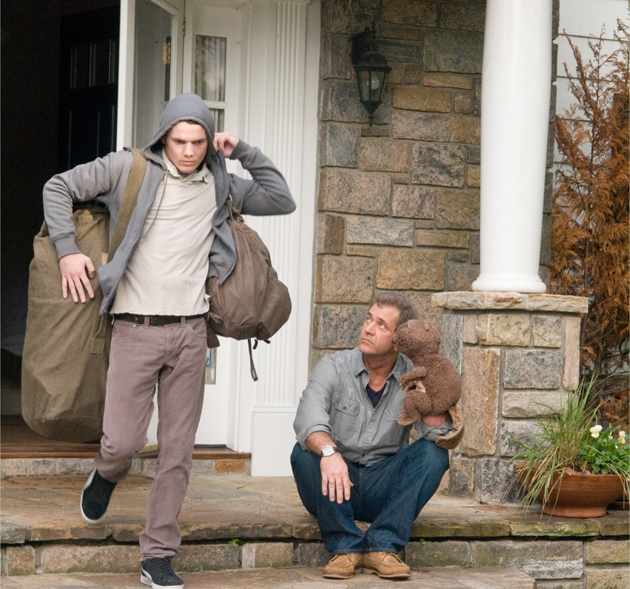 Porter Black, Anton Yelchin, will not accept that his spiritually absent father is now being replaced by a talking beaver with a cockney accent, and moves out. One picture is worth many words in describing what this family is going through.

Walter's long suffering wife, Meredith Black, Jodie Foster, and his sons, Porter and Henry Black, played by Anton Yelchin and Riley Thomas Stewart respectively, are an integral part of this film and, Walter's salvation - if there is to be any. Symbolically, the Blacks are the largest component of Screenwriter Kyle Killen's rather dark comedy, which runs a trim 91 minutes. 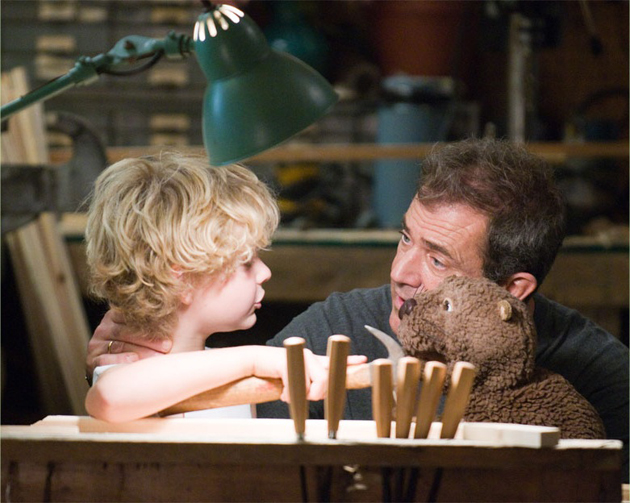 Walter Black, with his one young, innocent son, Henry, Riley Thomas Stewart, with The Beaver. Henry unconditionally loves and accepts his father, and thinks the talking beaver is funny.

Yes, this is a sad situation, but there are some rather dark comedic moments in this film for the Blacks. In fact, for a film that begins in total despondency, there are some rather light moments of hope with the reluctantly accepted "Beaver" instantly moving Walter into a much more positive direction: He becomes a real father, a tuned in, and now successful boss, and a happy responsive husband. We laugh with Walter. We root for Walter. Will Water fully transition into a viable human resource?

Not without some serious intervention. How is a talking puppet revealing what is true within a man's soul not terribly unusual, and ultimately, terribly wrong? It may have been therapeutic for a time, but in all eventuality, we just are not wired for this measure of abnormal behavior. 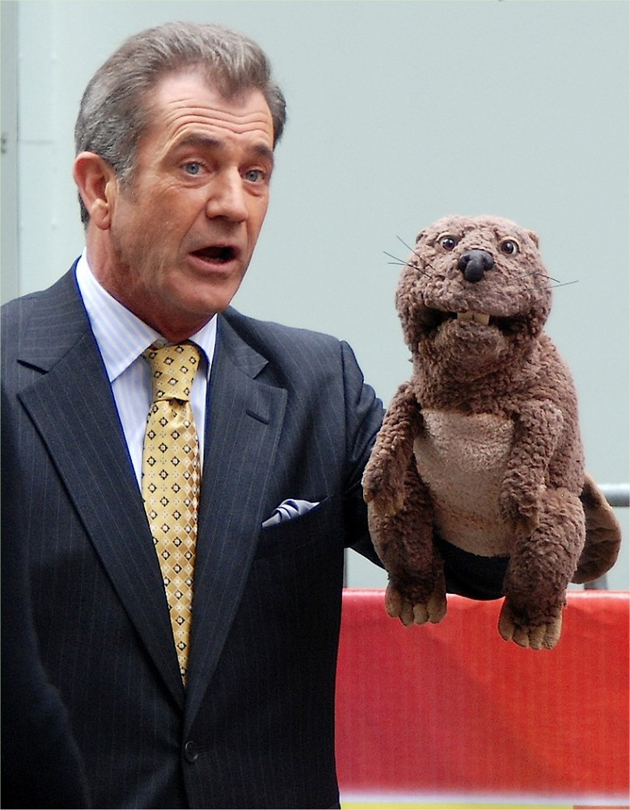 Walter's son, Porter Black, who makes his walking-around-money by writing prose for his classmates' assignments, did so rightly state through his missive in his ghostwritten graduation speech of his valedictorian friend, Norah, played by talented Actress Jennifer Lawrence: "Good afternoon, graduates, dead poets, painters, future Einsteins, and all those in between. Today I'm here to warn you, that you are being lied to. Our parents, our teachers, our doctors, have lied to us. And it's the exact same lie. The same six words, "Everything is going to be okay."

Walter Black is the personification that everything is not going to be okay, but maybe, just maybe, everything may eventually be bearable, and by understanding that, we may all bear through it okay. In his fine portrayal of Walter Black, Mel Gibson may have well proved that he will endure his personal travails, and maybe, just maybe, he will wind up okay as well.