Knowing | Beaufort County Now | The film "Knowing" uses the science fiction genre to introduce either theme that are plausible, in these days as our civilization struggles to rediscover its collective soul.

Login to Send a Private Message to Wyatt Sanderman Day
Publisher's note: As I am loathe to admit, Wyatt is probably our most read writer. Just a few nights ago, March 12, 2012, I was perusing our sister publication, Better Angels Now, and I noticed that so many of Wyatt's reviews, of the many fine films that occupy the public's interest, have not been availed to our readers through our Beaufort County Now publication.

Consequently, over the next many weeks, we will endeavor to remedy this mild injustice by publishing these reviews, in our current improved format, for your edification. Here below is our seventh in a series of these older articles of interest by our good friend, Wyatt Sanderman Day.

The film "Knowing" uses the science fiction genre to introduce either theme that are plausible, in these days as our civilization struggles to rediscover its collective soul. While the medium of science fiction is the vehicle to convey the film's message, the picture 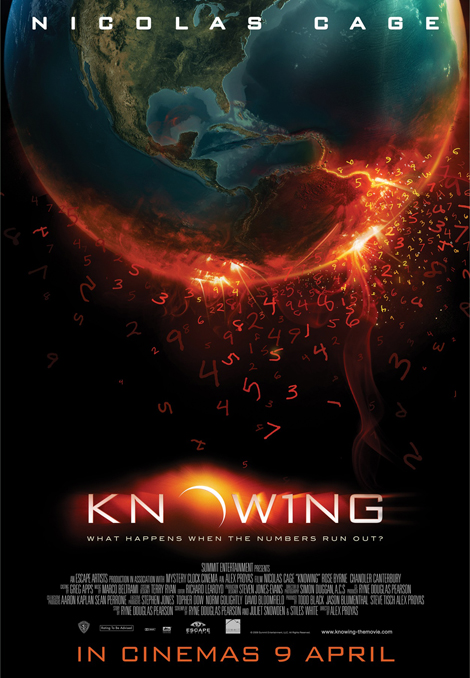 is not sufficiently overwrought in the techno speak of pseudo scientists to overwhelm the lesser laymen of the collective audience. This genre is just the backdrop to tell a thrilling story as old as recorded time: What is the order and the significance of your faith?

In the beginning of this picture, its protagonist, John Koestler played by Nicholas Cage, is ambivalent about the future of his soul. Shortly within the context of this character's introduction, we discover his ambivalence is a struggle between the reconciliation of the loss of his wife, to a random accidental death, and his original faith impressed upon his soul as the son of a Christian Pastor. John supports his preadolescent son as an astrophysicist professor, with an emphasis on cosmology, teaching at the Massachusetts Institute of Technology (MIT).

John's avocation keeps him looking to the stars, but it did not prepare him for what was about to occur. On one instance in his class, he explained the difference between the determinative universe and the random universe, and asked his bright student's opinions on which universe determines our future. After some discussion, they asked their professor's opinion, to which he earnestly replied, " I believe shit happens." Before the end of this 121 minute long film, his perspective will turn considerably towards 180 degrees. 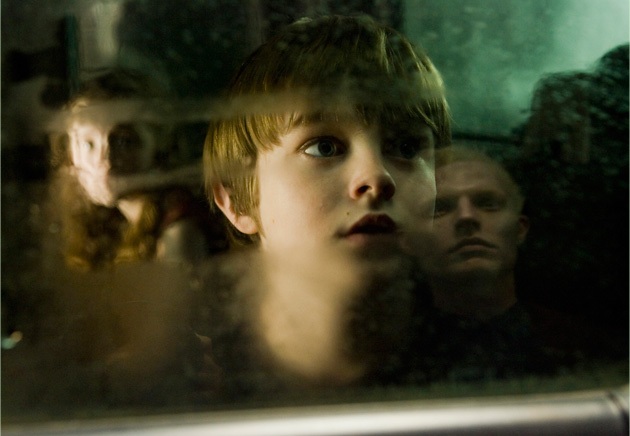 Caleb, played by Chandler Canterbury, is at the center of this story: Above. Additionally, so are the numbers here examined by John Koestler, Caleb's father, played by Nicolas Cage: Below. 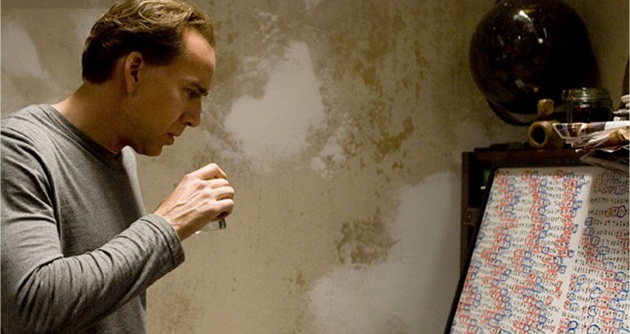 John's son, Caleb, played by Chandler Canterbury, is a special child, curious and wise in equal measure. When he randomly receives a paper filled with numbers, scribed by a peculiar student, put inside in a time capsule 50 years earlier, he begins to hear whispering voices through his hearing aid. John inadvertently finds the scribed numbers, and his curious scientific mind leads him to seek the sequence intended by the writer - a young girl named Lucinda, played by Lara Robinson, who also played Abby, Lucinda's granddaughter. Lucinda was the first to hear the whisper voices in 1959. At the risk of divulging too much, the voices are from a source of higher intelligence - possibly angels.

Director Alex Proyas and screenwriters: Ryne Douglas Pearson (also credited for the story), Juliet Snowden and Stiles White began the story with the haunted Lucinda and brought it to its fruition through the gripping continuation of the ethereal haunting (for lack of a better description) of Caleb Koester, as John deciphers the bizarre sequence of digits to discover the fate of others, and ultimately his family. Where this tale turns next may abandon those disinterested folks in the audience, who ascribe to the dead spirit philosophy; however, the film is specific in its spirituality as evidenced by the foretold catastrophes, eventually, seem much less random and more determined by design. 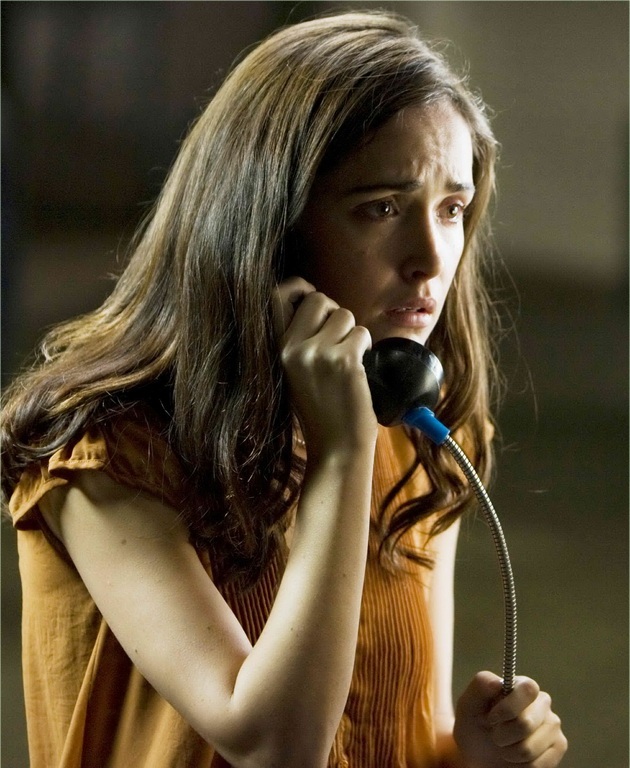 Diana, played Rosie Byrne, knows the absolute anxiety of not fully knowing: Above. John Koestler, Nicolas Cage, is beginning to know too much: Below. 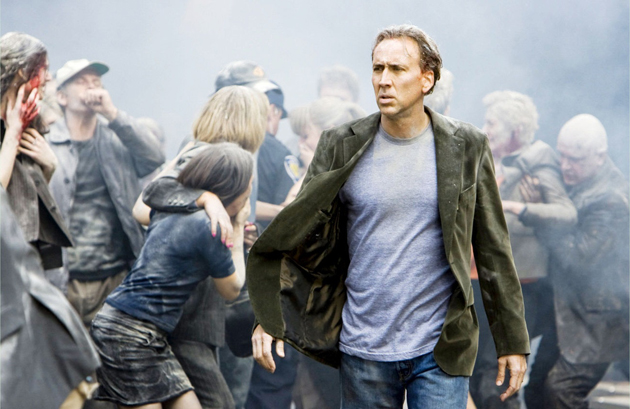 With apologies for waxing too cryptic, but with the intention of ultimately not revealing too much, I must warn you that the film's aforementioned message is one of a polarizing nature. At one point or another, some of the audience will reject its message, while others will be open to the plausible reality within the science fiction guise of this woeful tale. The film's apocalyptic potential foretells a tragic end and leaves us to root for that ray of hope, when tragedy is vanquished and hope reigns supreme. It is the conflict. The film successfully reveals how it will be resolved.

"Knowing" involves questions that you may, or may not have asked yourself. It reveals answers that you may or may not wish to validate; however, the film takes a position and it tells that story as honestly as it could, and as well as it intended. Regardless of ones prejudice towards accepting or rejecting that message, one must admit, the film intended an honest telling of its timeless tale. 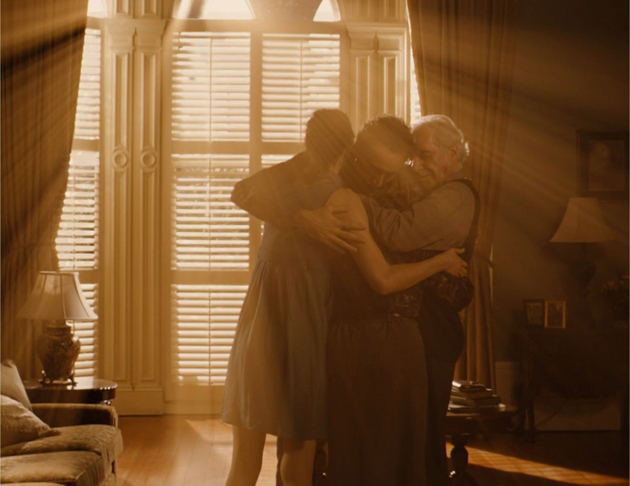 Believe it or not, there is something that we all have in common: There is an end, and there may yet be another beginning: Above and then below.

The computer graphics aiding in the telling of "Knowing" are not overwrought, but are well timed and perfect in their dramatic essence. Director Proyas's measured approach to telling this riveting story keeps it plausible regardless of its inarguably fantastic quality. Alex Proyas keeps it real. The film's story is the star. All others are just poor players laboring within its outline to reveal its point. And that point is so divine - if your personal constructs are not too well defined.