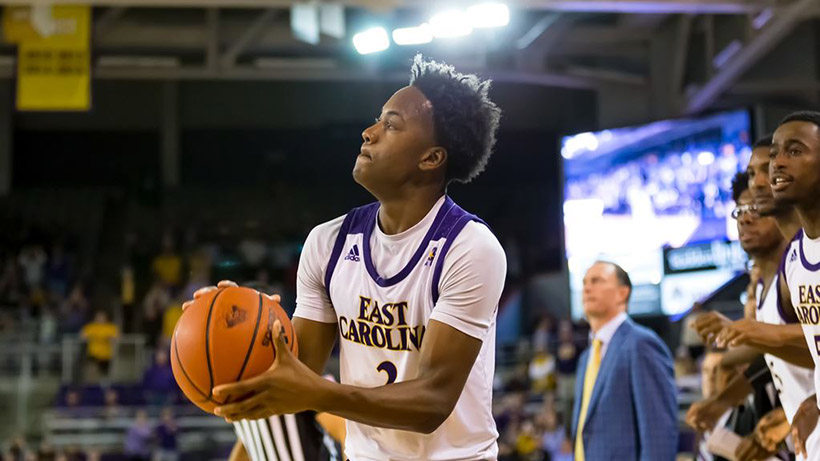 GREENVILLE, N.C.     Tristen Newton hit a 3-pointer from the left corner in the closing seconds and East Carolina knocked off SMU 71-68 on Saturday.

Tyson Jolley made two free throws to tie the game with 12 seconds left. Following a timeout, Tremont Robinson-White dribbled the length of the court and as he was challenged at the basket he found Newton for the game winner.

Jolley's runner from just inside half court bounced off the front of the rim as time expired.

Gardner had 14 points in the second half and East Carolina made 7 of 17 3-pointers and shot percent.

Robinson-White scored with 1:50 to play to make it a 3-point game. He then came up with a steal and was fouled. He made the first free throw and missed the second but Gardner grabbed the rebound and made the putback to tie the game at the 1:19 mark.

Isiaha Mike had 21 points for the Mustangs (12-3, 2-1), whose four-game winning streak came to end. Kendric Davis added 13 points and six assists and Emmanuel Bandoumel had 11 points.

ECU Head Coach Joe Dooley     Opening Statement     "Obviously, a good win for our guys. I thought we scratched and clawed. We got off to a good start, then I thought we really got lethargic. I thought we stopped cutting. We stopped doing what got us the lead. SMU is a very talented offense, and they put us in harm's way, I think it was a 19-4 or 19-3 run, and next thing you know, we were back on our heels. I thought the guys responded at halftime. We rallied, we just chipped away. We had some guys make some big plays, obviously culminating with Tristen's shot, but there were a number of guys before that that got us in that spot, including Tristen hitting two 3's back-to-back we were really struggling. Good team win."

On final play     [Tremont Robinson-White] drove it, Jayden set a really good screen, and Tremont got downhill, So, we were wondering if we were going to help on the drive, and if we don't help on the drive, we'll get a layup. Once he got around the corner, they helped, and he threw the ball to Tristen. Obviously, Tristen made a huge shot, we cleared Tristen out of the corner. Tremont got downhill and made a heck of a play."

Sophomore Jayden Gardner     On the team's overall performance     "They're probably the best offensive team in the league. Skilled, size everywhere, very tough to guard, but we held our own tonight and we didn't turn the ball over, and we got to shoot the ball."

On the atmosphere     "I remember last year, barley anybody, barely making any noise. It's just us working hard, practice every day, and it's finally translating to wins. Pirate fans want to see wins so we're here for them and they're here for us."

Freshman Tristen Newton     On the last play     "We were running the play for Tremont to get downhill and he got downhill, and three people went in on him, so he just threw it to me. It was a wide-open shot."