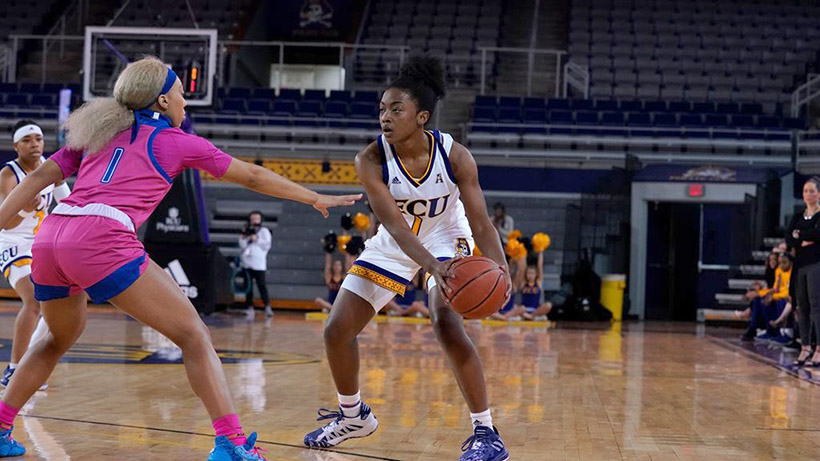 ECU (8-18, 5-8 AAC) was led in scoring by Taniyah Thompson, who finished with 23 points, including making four three-pointers. Lashonda Monk added 17 points, eight assists and two steals, with her final two points giving her 1,000 for her ECU career. Dominique Claytor registered her second straight double-double, scoring 10 points and ripping down a career-high 14 rebounds. It was the third straight win for the Pirates and the fourth straight win inside Minges Coliseum.

Temple (15-11, 7-6 AAC) saw the AAC's leading scorer and rebounder, Mia Davis, finish with a 13-point, 13-rebound double-double. The Owls were led in scoring by Ashley Jones who finished with 14 points to go with five assists.

On Wednesday night, the Pirates had to overcome an early 10-point deficit to beat Tulsa. Saturday afternoon, they dug themselves an even deeper hole. The ECU offense could not get any flow in the early going, scoring just two points in the first 5:45 of the game. On the other end, Temple struck repeatedly from behind the arc, making four triples in the opening eight minutes. A Davis layup with 2:06 to go in the first period put the Owls up 22-5.

ECU could have gone down for the count at that point, but the Pirates stabilized themselves and finished the first quarter on a 6-0 run, four of which came from Thompson, to cut the lead to a manageable 22-11 at the end of the first.

After Temple's early barrage, the ECU defense settled in during the second quarter. The Pirates allowed Temple to score just nine points in the second quarter. On the other end, ECU got a spark from freshman guard Katerina Tsineke, who drilled a pair of triples. That helped ECU cut the lead to 31-23 at halftime.

Coming out of the locker room, ECU took a big swing at the Owls. Thompson missed her first shot of the third quarter but caught fire after that. The AAC's reigning Freshman of the Week made a pull-up jumper and followed it with a pair of three-pointers as part of an 8-2 run that got ECU back within 33-31.

Temple withstood the punch and answered back. The Owls did not let ECU tie the game and finished the quarter on a 7-2 run to push their lead back to 40-33.

In the opening minutes of the fourth quarter, Temple extended its lead back to double-digits, at 43-33. From there though, it was all Pirates, driven by Monk, Thompson and Claytor. Monk and Thompson combined for a 14-0 run that turned a 45-36 deficit into a 50-45 lead with 2:12 to go.

Temple fired back with a 5-0 run, with Jones knocking down a three of her own to tie the game.

From there though, the Pirates used defense and free throws to win the game. A Tiara Chambers offensive rebound led to a Claytor free throw to put ECU back up. ECU survived a Temple possession that saw the Owls get three shots up before ECU grabbed the rebound with 27 seconds left. Monk was fouled and made both of her free throws to make it 53-50. Temple went for the tie with a three, but the ball clanged off the rim and Claytor was able to corral the rebound. The junior guard made her first free throw and then on the second, Ryann Evans was able to tap the offensive rebound out to Monk who was fouled. Monk made her final two free throws to ice the game and give her an even 1,000 for her career.

The Pirates will head south to take on South Florida on Tuesday night. Tipoff is scheduled for 7 p.m.

ECU associate head coach Cory McNeill     On his message to the team to comeback: "We had a rough shootaround this morning; I feel like that contributed to our rough first quarter. How we looked in that first quarter is how we looked in shootaround. I know that our prior practices that we had preparing for Temple, we had done some good things. I just kept saying, 'Stay the course, ladies, we're going to turn this around. Just don't let it get out of hand,' and they did that. We started defending a little bit tighter; we fixed the issue we had in the first part because we weren't defending. We were rebounding-cut that gap down. Then we finally came back down the floor and executed offensively. That's how we slowly closed the gap, so we were able to outlast them down the stretch."

On the difference in the team now compared to earlier in the season: "Our prep, how hungry we are. We've been talking about a lot of things that we felt like we slipped up on in January. We were saying that if we prepared the right way, February could be a good month for us. That's what we're trying to do; we're just trying to take advantage of every moment, every game, every second."

On the Pirates' defensive performance: "We had to tighten up. They (Temple) have three double figure scorers that can get hot: Ashley Jones, Mia Davis, and Marissa Mackins; they could go off at any point, so our thought early in the game we were giving them what I call "gun shots"; wide open shots that you could shoot on the shooting jump. We tightened up and put a hand in their face and made them take tougher shots. We were able to capitalize on those rebounds with the ball and get out on transition to get some easy buckets to get ourselves going. Temple is a great team and they're well coached. Tonya Cardoza does an unbelievable job, so we knew it wasn't going to be an easy game.

ECU freshman guard Taniyah Thompson     On her performance: "I'm just happy that we got the win. That my coach and my teammates had the confidence in me to hit the shots; I'm just happy about that."

On Temple's defense: "I knew it was going to be a tough game. So, I had to get to my spots and do what I do best, shoot."