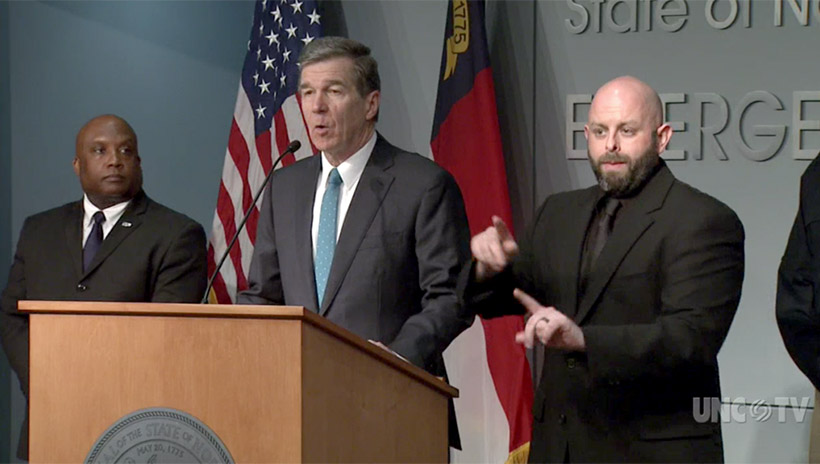 The way he plays with people's lives and livelihoods. The flagrant partisanship and a creeping disdain among Democrats for freedom and liberty.

The hypocrisy, the pandering. The weird science. It's too much.

Bars remain closed as restaurants with bars - an indiscernible difference - are open.

Indoor gyms, where people go to get and stay fit and healthy - some in a religious way - are closed. Classes are held outdoors, on asphalt and concrete. In the rain. In stifling heat and humidity. But playgrounds, which are outside, remain closed.

North Carolina is among a small handful of states refusing to open gyms. Unacceptable.

I've written two columns about Cooper and his suppressions, and this will be my last. The final story in a tragic trilogy.

Republicans on Wednesday tried in vain to persuade Democrats to override Cooper's veto of a second bill reopening bars and gyms.

Cooper is quick to quote from piles of health data, which, he says, provide convincing evidence supporting his decisions. Republican lawmakers Wednesday asked Democrats to also offer statistics about a rise in suicides and domestic violence because of the lockdowns. Are we tracking people getting sicker with cancer because they're missing treatments or skipping tests? Or those with emerging or ongoing heart disease, or diabetes?

Democrats had nothing of the sort. Why even bother, if you're them.

"Way, way too often our decisions are not based on what is best for the people of North Carolina," Rep. Michael Speciale, R-Craven, said during a House debate Wednesday. "It's about what's best for our caucus or our party. I'm asking everyone here to stop and remember that you are representing the interests of [many] people."

Fine words, but they matter little. Cooper's leading from the top, the legislature virtually ineffective in moving legislation he doesn't support. Lawsuits from bar and gym owners pile up in the courts, where rules and processes leave outcomes uncertain and possibly short-lived.

"The governor's decision is effectively signing a death warrant for 1,063 bars across North Carolina while offering zero relief to the small-business owners or their employees," said Zack Medford, president of the N.C. Bar and Tavern Association.

The majority of North Carolina Democrats apparently couldn't care less. They continue to make nonsensical arguments about Republicans trying to usurp the governor's power by forcing, through legislation, Cooper to open gyms and bars, when, in fact, the latest bill requires only that his decisions clear the Council of State.

Absolute, unilateral power. To order businesses into failure and bankruptcy. To remove monuments. To order that people wear facemasks.

Businesses, he said Wednesday, will be held responsible - with threat of citations and fines - for enforcing his rule on face coverings. How then does the governor plan to enforce that edict on protesters, who occupy public streets? Especially when he refuses to encourage harsh penalties for rioters who destroy property, over and over again. Or people who block highways. That's not so hard to understand, I guess, when you consider these are many of the same people who openly support Cooper, in demonstrations and on social media.

"We're assured that masses of maskless people gathered together in the streets caused no rise in cases, yet we're now all required to wear masks because the danger is too great," Senate leader Phil Berger, R-Rockingham, says in a statement. "The inconsistencies and hypocrisy continue to eat away at the trust in and credibility of this administration."

By no means do I discount this deadly virus. Too many have died, and too many others are sick.

Too many are suffering from emotional and financial distress. Despondent that the government has so intruded in their lives as to remove any hint of the idea of personal responsibility. Furious that we can't visit people in hospitals, people who are there for myriad reasons. People we can't visit, say Democrats, because of an obtuse federal law allowing hospitals to restrict visitation.

Because most Democratic lawmakers lack the guts to defy the governor.

So they lie there. Sick. Afraid. Alone.