Georgia let the nation down | Beaufort County Now | It appears that both Democrats will win in Georgia, subject to a recount, and thus control both houses of Congress | Georgia, control of Senate

Georgia let the nation down

Democrat Raphael Warnock is projected to defeat Sen. Kelly Loeffler, R-Ga., in one of the two crucial Senate runoffs in Georgia, according to Fox News' Decision Desk early Wednesday.

Warnock addressed his supporters shortly after the polls closed and declared victory. 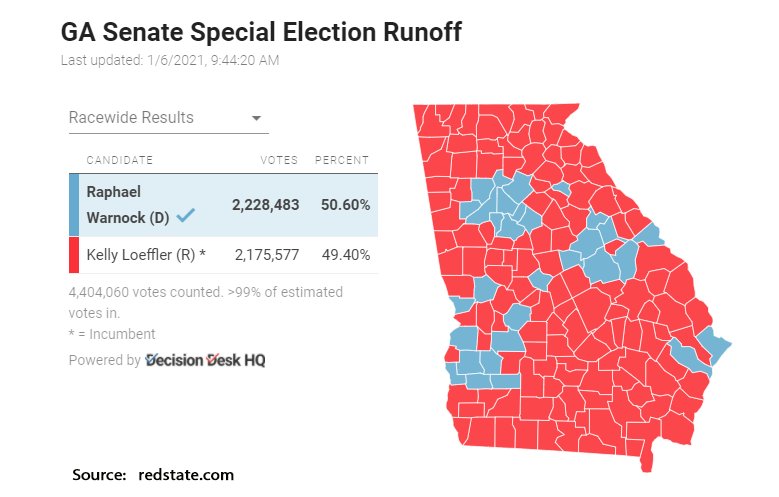 "Georgia I am honored by the faith that you have shown in me and I promise you this tonight, I am going to the Senate to work for all of Georgia," Warnock said short.

The focus now shifts to the second race between Sen. David Perdue and Democrat Jon Ossoff. The candidates were locked in a tight race and it was too early to call a winner. Under Georgia law, a trailing candidate may request a recount when the margin of an election is less than or equal to 0.5 percentage points.

If Ossoff wins, Democrats will have complete control of Congress, strengthening President-elect Joe Biden's standing as he prepares to take office on Jan. 20.

Loeffler encouraged her supporters to "keep fighting." She refused to concede. Loeffler told supporters her campaign saw a path to victory.

"Every single American, stay in the fight with us," Loeffler said after midnight, with votes still being counted. "We are going to keep fighting for you. This is about protecting the American dream. I'm never going to stop fighting for this country, for the American, for each one of you so that every Georgian has a voice in Washington. "I work for you, I don't owe anyone up there anything," she continued. "We're going to get this done. God bless you, thank you so much, God bless Georgia and we are going to get this done. Thank you."

Assuming this holds, it is a bad day for America.  If both of these Demorats ultimately are seated in the Senate then the Democrats will control both houses of Congress and the White House.  And with that power they are likely going to try to also take over the Judicial branch also.

This development in Georgia increases the urgency of the November election results being contested.  By the time you are reading this, that will have been determined.  If Republicans in Congress do not contest a fraudulent election, at least in a half dozen states, then Biden/Harris will assume enormous power.