Mission Command: The Entry of the Pharisees (Part II) | Beaufort County Now | Come with us on Part II of Wolfman and The Guardians' journey through the streets of our nation's capitol. These stories are only available exclusively here at BCN! | Discernment, False Flag, Pharisees, The Plan, New Testament, cptl prtst

Mission Command: The Entry of the Pharisees (Part II)

Login to Send a Private Message to William H. Cratch lll
Publisher's note: This post is an installment of a multi part series on one man's perspective of the "mostly peaceful protest" at the our Nation's Capitol on January 6, 2021. Click here to access a list of the posts in this series.

3 And he entered again into the synagogue; and there was a man there which had a withered hand.

2 And  they watched him, whether he would heal him on the sabbath day; that they might accuse him.

3 And he saith unto the man which had the withered hand, Stand forth.

4 And he saith unto them, Is it lawful to do good on the sabbath days, or to do evil? to save life, or to kill? But they held their peace.

5 And when he had looked round about on them with anger, being grieved for the hardness of their hearts, he saith unto the man, Stretch forth thine hand. And he stretched it out: and his hand was restored whole as the other.

6 And the Pharisees went forth, and straightway took counsel with the Herodians against him, how they might destroy him.

As we departed from the Washington Monument, there was an air of confusion as to why President Trump's speech didn't reveal any unknown information. Many had a look of confusion but some had a look of fear. Myself along with our group of Patriots and Guardians decided to follow Constitution Avenue instead of Pennsylvania Avenue to the Capitol. We felt as if the chariots of the Gods were trying to surround us and someone or something was following us. At that particular time, we hadn't been notified of the conflict going on between "alleged"Trump supporters and Capitol Police. 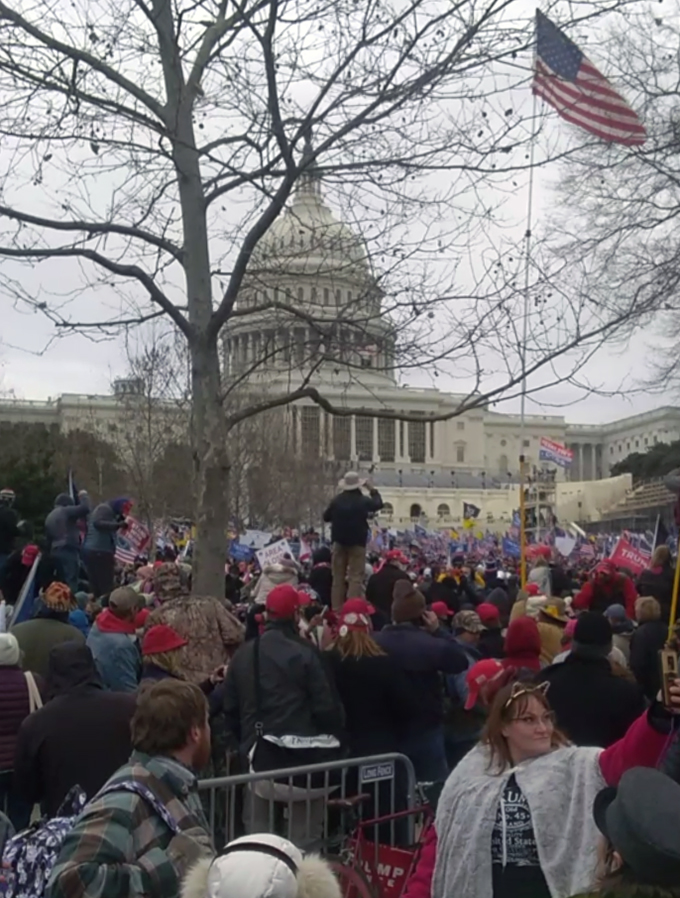 The peaceful protest at our Nation's Capitol on the Mall on January 6, 2021: Above.    photo by William Cratch
About halfway down Constitution Avenue, the Oracles began to spread their news of joy: "Pence has betrayed America. The Republic is lost!" I can't explain the looks of horror I saw on the faces of some. The sound of fear in the voices of a couple of near-by Valkyries were both heartbreaking and worrying. Even though some were fearful, our brave Valkyries got their tears out and pressed on like warriors of God! As the Capitol dome became nearer, we noticed the atmosphere changing yet again. I looked around and noticed that we were nearing our newly prioritized destination as the architecture became very Neo-Classical. For some reason the phrase "Clash of the Titans" kept flashing in my brain. Myself and Dr. K both looked at each other after hearing the roar of the crowd and both signaled that we may need to keep our battleplans open in the event that we became compromised.

As we reach the outside grounds of the Capitol building, we all noticed that the barricade gates were opened, there were no snipers around and it seemed as if somebody knew we were coming. The belief that ANTIFA got in through a smashed window is a lie. We saw them go in through the main doorway while a distraction was created on the second level. The Pharisees had entered the Temple of The People and nobody stopped them! How could this be? Had God forsaken us OR were we witnessing something that would be uncovered at a later date? Contrary to the reports of the Texas Chainsaw Media, most of our fellow patriots stared in shock and confusion. It was at that moment I realized why we were there. President Trump wanted We The People to see the Pharisees at work. He wanted us to see just how far they would go, on many different levels, to undermine both he and our Constitutional Republic.

The Great President also knew that several of us would analyze what happened, put the pieces together, use a little discernment and spread the word to our Kinsmen that The Plan is right on schedule!

Publisher's note: This post is an installment of a multi part series on one man's perspective of the "mostly peaceful protest" at the our Nation's Capitol on January 6, 2021. Click here to access a list of the posts in this series.