Today I take up my Defensive Position around the Vice-President of the Good Ole USofA. I understand she is a polarizing figure but I also understand where she is coming from.

One big area of misunderstanding is about what she has been doing and not doing since she was appointed Southern Border Czar on March 24, 2021...

WASHINGTON — President Joe Biden announced Wednesday that he has appointed Vice President Kamala Harris to lead efforts to stem migration across the U.S.-Mexico border, as the administration faces growing political pressure to address a surge in undocumented migrant children unaccompanied by parents.

Biden said during an immigration meeting at the White House that he had asked Harris to lead the administration's efforts with Mexico and the Northern Triangle — El Salvador, Guatemala and Honduras, countries that will "need help stemming the movement of so many folks, stemming the migration to our southern border."

Much has been made of the fact that the closest she has been to the border since she was put in charge of the border is Alexandria, VA.

I know why she has conducted herself in this seemingly cavalier manner and now you are about to know what I know. After I have told you what I know, I hope you will feel compelled to send a Tweet to her that will apologize and convey to her your understanding for all the hard work she has not been doing.

I visited with her yesterday to get her side of the story first hand and I came away with a new full appreciation for her position.

It is as simple as this. Our Vice President takes very seriously the Oath of Office she took on January 20th. In particular, she sees that part of the oath that I have underlined below as her most sacred responsibility...

I do solemnly swear (or affirm) that I will support and defend the Constitution of the United States against all enemies, foreign and domestic including my sacred obligation to always stand behind the President; that I will bear true faith and allegiance to the same; that I take this obligation freely, without any mental reservation or purpose of evasion; and that I will well and faithfully discharge the duties of the office on which I am about to enter. So help me God.

It’s as simple as that. She knows that her most important responsibility is to be there behind the President if, God Forbid, he ever needs her to come from behind to the front.

Did I just hear you say you want proof? OK, Mr. Smarty Pants, here are 3 such proofs... 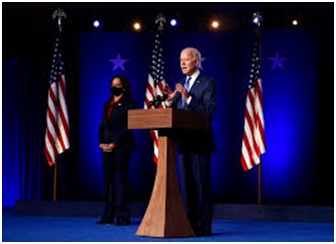 I could paste in 500 more such proofs but I have better fish to fry. Read on.

Are you ready for a Bombshell?

I am not a devotee of Joe Biden but he highly respects my counsel and I have his complete confidence. I have planted the seed in him for his removal from office the very next day after he puts into action my latest recommendation to him...

He acknowledged the wisdom of my recommendation and he said his speech next Thursday would see him pontificating in the Front of a Bus.

Next Friday, after the citizens of the Good Ole USofA see that Biden has put his Vice President in the Back of the Bus, he will be removed from office before the day is done.