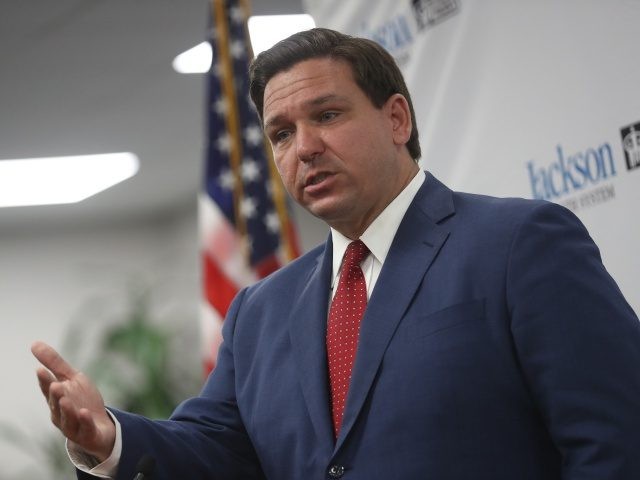 Florida Gov. Ron DeSantis (R) signed SB 7072, a law he claims will equip Floridians to fight back against Big Tech censorship on Monday.

Speaking at Florida International University in Miami on Monday, DeSantis detailed action Florida is taking to fight against Big Tech via SB 7072.

“Really Florida is a trailblazer, yet again, on another issue that’s really important to not just millions of Floridians but really tens of millions of Americans,” DeSantis said Monday.

“When the Founding Fathers established our country and crafted the Constitution, they were very concerned with threats to liberty,” he continued, highlighting their concerns over government power and concentrations of power, which would “lead to people’s liberties being curtailed.”

“We are now though in a situation where we have things that, I think, were probably unforeseen by the Founding Fathers,” the governor continued. While the founders established the First Amendment as a shield against government overreach, “we now have a situation in which some of these massive, massive companies in Silicon Valley are exerting a power over our population that really has no precedent in American history,” he explained.

“I would suggest the monopolies today, these Big Tech monopolies, are exerting way more influence over our society than the monopolies than the earliest 20th century, which led to anti-trust and a lot of trust-busting,” DeSantis said.

Platforms, he continued, have become a “public square” but now act as “enforcers of orthodoxy,” suppressing ideas “that are either inconvenient to the narrative” or ideas they “personally disagree with.”

According to a summary provided by his office, all Floridians “treated unfairly” by Big Tech platforms “will have the right to sue companies that violate this law — and win monetary damages.”

This, his office claimed, will prevent “Big Tech bureaucrats from ‘moving the goalposts’ to silence viewpoints they don’t like.” They also say the bill allows the Florida attorney general to bring action against technology companies that violate the law “under Florida’s Unfair and Deceptive Trade Practices Act.”

“If social media platforms are found to have violated antitrust law, they will be restricted from contracting with any public entity. That ‘antitrust violator’ blacklist imposes real consequences for Big Tech oligopolies’ bottom line,” his office said.

“Any Floridian can block any candidate they don’t want to hear from, and that is a right that belongs to each citizen — it’s not for Big Tech companies to decide,” his office said:

When people look back on this period of history, DeSantis said, two issues will be at the forefront: The efficacy of coronavirus lockdowns and the origin of the virus, using those as examples of Big Tech’s influence and impact.

“Now we have information that this very well may have emanated from the Wuhan lab, that it was a leak from the lab. But you remember when people last year were raising that as something that needed to be investigated, they were deplatformed for talking about the lab leak,” DeSantis said.

“They were censored for having said that. And now, even Fauci admits that this may be something that very well is the case. Are they now going to censor Fauci and pull him down off social media?” he asked.

Because corporate media said it was a conspiracy theory, DeSantis continued, Big tech oligarchs “responded” and targeted the opposition, behaving similarly last year against those who criticized lockdowns.

“And honestly, they are some of the major reasons why this country is divided for doing what they’re doing,” he added. “And the worst part about this: Silicon Valley thinks they know better than you.”

But because the bill is missing a crucial element — the categorization of tech companies as common carriers or places of public accommodation — most of the provisions are unenforceable, destined to be proven ineffective in the courts.

The bill certainly sounds good. Banning (and shadowbanning) political candidates is prohibited, with daily fines if companies fail to comply. Banning or censoring a journalistic enterprise based on the content it publishes (like the New York Post Hunter Biden stories) is prohibited.  Users will be allowed to opt out of Big Tech algorithms.

“All of these are great ideas,” he reported. “But without common carriage or public accommodation measures, it is highly doubtful that they’ll survive legal challenge.”

If this man continues as he has been doing he will likely be the next President of the United States and if not President then certainly Vice President.  He showed solid common sense in standing up to the foolishness of the Covid mandates.  He has recently pushed for sales tax holidays to encourage business development.  Now he is taking on Big Tech.

We have to say that we are not entirely pleased with this approach to fighting back on Big Tech.  We have said often and for some time that people who do not like the way Facebook, Twitter, Google, Amazon etc. do business that they should simply take their business elsewhere.  It seems to be working with Coca-Cola.  But it is not quite that simple.  The leviathans have become so powerful we think more will have to be done, but we would prefer anti-trust and withdrawing their tax breaks and special favors they have accumulated from the government.  But in the absence of such action, perhaps Gov. DeSantis is wise to push this bill, if but to make a point that “enough is enough.”

The fundamental flaw with the “sue and fine them” is that it is not a true conservative approach.  It would entail more and bigger government.  We don’t need that.  What we're waiting for is for him to nullify some of Biden's unconstitutional Executive Orders.