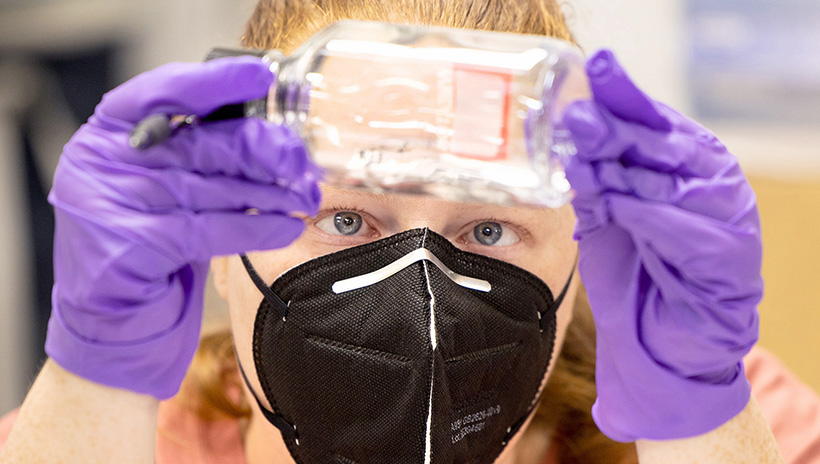 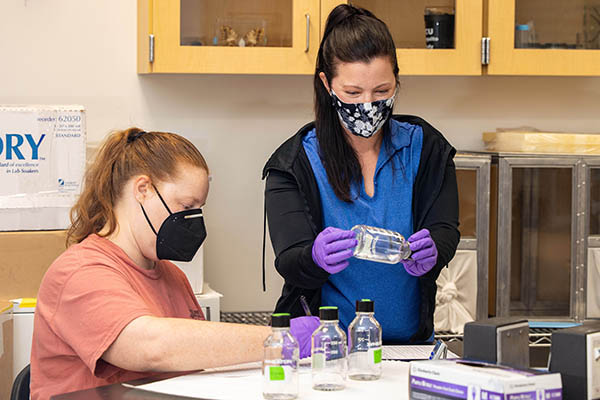 Melissa Nolan, left, and Dr. Stephanie Richards document the mosquitoes’ reaction to insecticide residue inside glass bottles.
Every time a hand slaps skin at an outdoor summer barbecue, a mosquito loses its wings.

Dr. Stephanie Richards, a professor in the East Carolina University College of Health and Human Performance, is conducting research in hopes of reducing the number of those uninvited guests, thus preventing disease transmission and those annoying, itchy bumps.

Richards is researching insecticide resistance among various species of mosquitoes as part of a $30,000 grant from the Centers for Disease Control and Prevention through the N.C. Department of Health and Human Services Division of Public Health.

At her lab inside the Belk Building, female mosquitoes are placed in glass bottles containing various amounts of residue from active ingredients in mosquito insecticides. At five-minute intervals, student researchers check the status of the mosquitoes for up to two hours. Some fly normally, others flutter upside down and still others crawl lazily against the glass, an indication of the effectiveness of insecticides health departments, other agencies and commercial companies use to kill mosquitoes.

"It's tedious work, but it is pretty cool to see how quickly they can go down," said Jordan Mazzara, a graduate student in environmental health and an assistant in Richards' lab. "It's interesting to see when they are starting to show resistance, when you see that they're not going down as easily. It's really great that we can caution the health departments to consider stop using certain active ingredients or to switch to others or modify what they use."

Richards works with a number of counties throughout the state on mosquito control. Agencies send her mosquito eggs that are grown to adulthood in her lab. The process takes about a week. Those adults are then subjected to various active ingredients in insecticides. Data is collected and passed on to public health officials so they can make decisions on effective mosquito control methods. 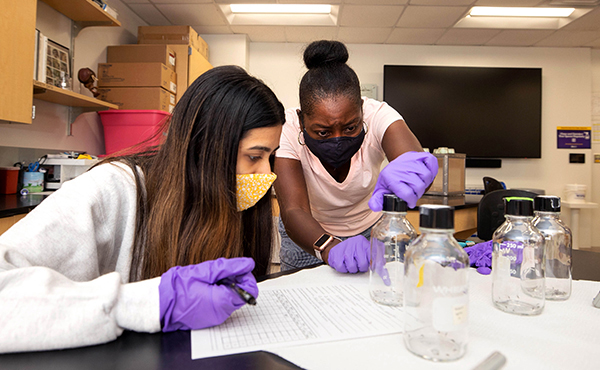 Student Kajal Patel, left, gets assistance from teaching instructor Avian White.
"We've been doing this kind of work for four or five years now," Richards said. "It's been a good collaboration, and the health departments appreciate it because they get some feedback and some advice."

Beyond just a pesky, itchy bump, mosquitoes can transmit the West Nile, dengue and Zika viruses as well as Eastern equine encephalitis and La Crosse encephalitis through their bites.

"In this area, we don't have a lot of vector-borne disease, although several years ago there were several travel-related Zika cases," Richards said. "In eastern North Carolina, we do have West Nile virus and Eastern equine encephalitis virus circulating in the local bird populations and these viruses can sometimes be transmitted to horses and humans by mosquitoes that blood feed on both birds and mammals. People getting bitten and infected with one of these viruses is a concern, but it's just the irritation of the mosquito bites and not being able to do what you want outdoors, too."

Richards said there are about 60 species of mosquitoes in North Carolina. Surveillance is key, she said, to determine the types of mosquitoes that may be prevalent in any one area so officials can determine a control plan to protect public health.

"Only a small number of species are health issues that can transmit pathogens, so you wouldn't treat an area with insecticides if you have a large emergence of mosquitoes that say only bite frogs," Richards said. "That's the reason for trapping. You want to look for the species that pose a public health threat. ... Ideally, there will be surveillance-based targeted control. They should be trapping and looking at the species and the abundance of the mosquitoes and targeting when and where to treat." 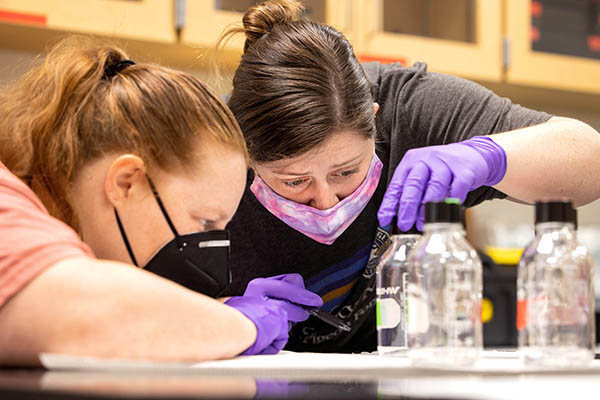 "Culex are the primary vectors of West Nile virus and Eastern equine encephalitis, so that's an important one," Richards said. "There's a real issue nationwide with Culex being (insecticide) resistant, and it's no different here in North Carolina. Culex can lay eggs in water-holding containers, but they can also be in ditches and similar places where their immature stages develop."

That's just one reason she said mosquito control starts at home. She advises residents to dump containers that can collect water where mosquitoes lay eggs and develop.

"Mosquitoes can lay their eggs in a little teaspoon of water. That's all it takes," she said. "People who have buckets and tarps and all kinds of things in their backyards that collect water, that can be an issue that they can fix themselves, so education is also important for mosquito control."

James Johnson has a master's in public health from ECU and is a doctoral student in public health. He's the director of medical affairs for Vidant Medical Center but spends time in Richards' lab observing mosquitoes and contributing to the research.

"I'm excited about working with mosquitoes, as odd as that may sound," he said. "Animals and insects have always been something I'm interested in." 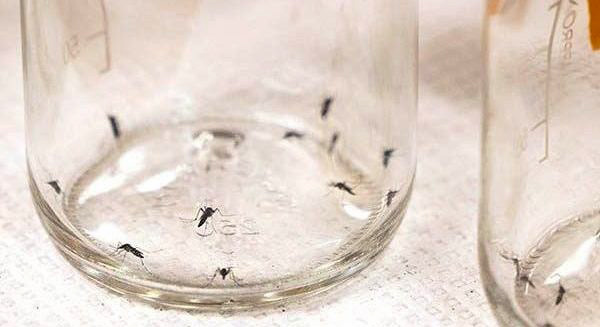 Mosquitoes are placed in glass bottles containing insecticide residue to measure potential resistance.
For Mazzara, who is seeking her master's in environmental health, she's not a fan of the pests but embraces the research.

"I don't like mosquitoes but these are in a cage, so I thought this would be pretty cool," she said. "I'm interested in the diseases that they transmit. Disease prevention and everything that goes along with that speaks to me."

Richards carries that same goal with her research. Her interest in public health crossed paths with mosquitoes when she interned in the vector program at the Craven County Health Department as she worked on her master's in environmental health at ECU in the early 2000s. Now as a professor and researcher at ECU, she passes that passion for public health to her students through one of the smallest pests around — the mosquito.

"Anywhere there's water, there are mosquitoes," she said. "We're trying to figure out better ways to kill them."
Go Back