Saigon all over again 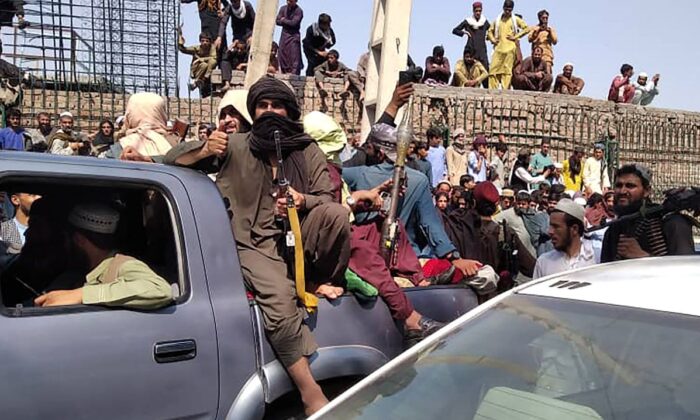 Dinesh D’Souza, writing at The Epoch Times.com excoriates the Biden Administration's handling of the U. S. troop withdrawal from Afghanistan:

America and the world are watching in rapt dismay as Afghanistan falls into the hands of the Taliban. Just weeks ago, Gen. Mark Milley, chairman of the Joint Chiefs of Staff, said that wouldn’t happen.

“The Afghan Security Forces have the capacity to sufficiently fight and defend their country,” he said. President Joe Biden, too, insisted that Afghan forces would “continue to fight valiantly.”

Never have such confident assessments proven more wrong. The Afghan army, trained by the United States for 20 years at almost incalculable cost, proved to be no match whatsoever for the Taliban. To put it bluntly, when asked to perform by themselves on the battlefield, the whole army just got up and ran away.

What does this say about U.S. military training? Many commentators are making snide remarks about how “woke” the American military has become. Perhaps, one sarcastically noted, with a few more men in high heels, a few more transgender surgeries, a few more courses in white rage and critical race theory, the U.S. military would be ready once again to become the most feared in the world.

The blithe reaction of the Biden administration has made a catastrophic situation worse. Right when the Taliban was launching its blitzkrieg, the White House released a video of a prancing gay intern bopping around the West Wing. While this was undoubtedly not meant as a response to the serious crisis abroad, it conveyed a frivolous message of, “We may be losing, but we sure know how to lose with style.”

More significant, the State Department and press secretary Jen Psaki made statements that bordered on the absurd. The State Department warned the Taliban to slow its advance because, if it didn’t, the United States might withhold diplomatic recognition of the new regime. Psaki said the Taliban should carefully weigh the impact of its actions on its chances for full acceptance by the “international community.”

Even now, after our long engagement in Afghanistan, do these people have no idea whom they’re dealing with? The Taliban are tribal warriors who function in the ancient style. Their name means “student,” but many of them are in middle or even advanced age. These are people who don’t want women over the age of 10 to be educated. They had no qualms about destroying the Bamiyan Buddha statues. They couldn’t care less about such things as U.S. diplomatic recognition or full acceptance by the United Nations.

One can envision a Taliban commander responding to the State Department and Psaki thus: “We would be willing to come to your international meetings if we can bring our arms and our animals. We insist upon the right to sell some drugs on the side to fund our operations. We do not wish to leave the meeting without beheading everyone who is there. And to show our true feelings about the international community, we’d like to defecate on the floor before we leave.”

This is intended half-jokingly, but only half-jokingly. The entirely serious question that we should be asking is, how did we get this disastrous outcome that has produced a human debacle, an abandonment of allies, and an enduring loss of U.S. credibility in the world?

But how did Biden and Milley make such a miscalculation about the tenacity and durability of the Afghan forces? It seems that despite two decades of costly and unrelenting effort, the United States never trained the Afghans to operate as an independent fighting force. From the start, they were treated and trained as an adjunct of the U.S. military.

Yaroslav Trofimov of The Wall Street Journal writes: “The Afghan army fighting alongside American troops was molded to match the way the Americans operate. The U.S. military, the world’s most advanced, relies heavily on combining ground operations with air power, using aircraft to resupply outposts, strike targets, ferry the wounded, and collect reconnaissance and intelligence.”

So Biden pulled air support, intelligence, and contractors servicing Afghanistan’s planes and helicopters, and that means “the Afghan military simply couldn’t function anymore.” Chillingly, Trofimov writes, “The same happened with another failed effort, the South Vietnamese army in the 1970s.”

Once again, the world’s most powerful military has been humiliated by a group of Third World tribesmen and peasants.

There’s no denying it was the Biden administration’s precipitous withdrawal that brought on the debacle. It’s hard to believe that Trump would have done it this way. True, Biden campaigned on full withdrawal, and in this respect, the Afghans knew that getting out was a possibility. But evidently, the Afghan government, including President Ashraf Ghani, couldn’t believe the United States would actually do it.

Now, the Taliban will control Afghanistan once again, as 20 years ago they did. China will seek to establish friendly relations with the new regime, and unfurl its plan to build routes connecting China to Afghanistan to Pakistan. America’s enemies, from Russia to China to the radical Muslims in the Middle East, all will feel emboldened. American allies are now on notice that they can’t count on the reliability of U.S. forces who are subject to domestic political whims and vicissitudes.