The corrupt leadership at the FBI is in deep trouble...if Republicans take back the House and Senate | Eastern North Carolina Now | Time to clean house. Get out and vote and get 10 other conservatives to do the same thing

The corrupt leadership at the FBI is in deep trouble...if Republicans take back the House and Senate 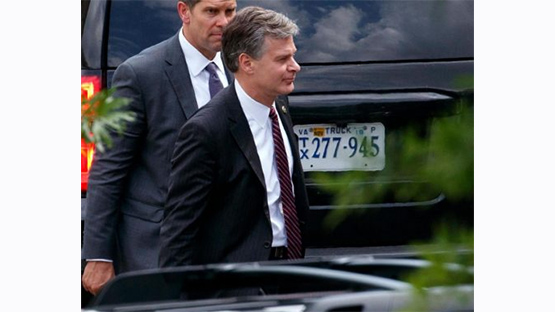 Help is on the way- if people can go vote. That is the story after the FBI raid on President Donald J. Trump’s Florida home last week proved to be a galvanizing moment for American politics after years of corruption and hoaxes at the highest security levels of the country.

The good news is that a handful of patriots are left at the FBI, while the agency, in general, is taking a beating in public approval.

There are also a few surprises left as a few bold patriot leaders left in the US House and Senate are signaling that if the Patriots can retake the House and Senate in the 2022 mid-terms, there will be a push for oversight, and they will investigate the FBI over this latest scandalous raid on Trump.

One US House member even had a shocking detail about what is happening already that should entice people to get out in vote for America First candidates in the next two elections.

On the Senate side is Republican US Senator Chuck Grassley from Iowa, who has been following the massive corruption surrounding the Hunter Biden laptop, so he understands a few things about the FBI.

Grassley has also been a champion of government agency whistleblowers for the length of his Washington Career, and he has already met with whistleblowers from the FBI who want to come forward now.

Some reporters are paying attention to the bold moves by Grassley, a 7 term Senator who serves as the president pro tempore emeritus of the United States Senate.

The position Grassley holds is critical- because the US Constitution instructs the Senate to choose a president pro tempore to preside over the Senate in the absence of the vice president.

According to Phillips, Grassley said he intends to investigate the FBI’s raid of former President Donald Trump’s Mar-a-Lago resort if Republicans take back the Senate during the 2022 midterms.

In an interview on Saturday, Grassley said that with Trump, “the FBI over a long period of time has kind of a double standard. You know, you can go back to the Steele Dossier.”

“And it just seems to me like they there’s political bias in the FBI,” Grassley told Breitbart News. “And then I have recently—you’ve heard me give evidence of political bias of starting a Trump investigation and then quitting a Hunter Biden investigation. So it’s legitimate to raise the question about the extent to which there’s still political bias and what we’re doing now.”

Grassley then took issue with Attorney General Merrick Garland’s comments on transparency, saying that “he should make sure that the affidavits follow up on the warrant.”

And on the House side, we have patriot, Republican, US Rep.Jim Jordan from Ohio who is signaling that he is ready to get into a match with the corrupt officials at the top of government to expose the massive disturbing power grabs the left has made.

And now for the bombshell revelations.

Jordan has been on Offense already, according to his Twitter timeline, where he posted a pointed letter to the White House and to Christopher Wray after dropping a bombshell about the amount of FBI Whistleblowers who have come forward to talk to legislators :

“Fourteen FBI agents have come to our office as whistleblowers, and they are good people,” Jordan told Fox News. “There are lots of good people in the FBI. It’s the top that is the problem.”

“Some of these good agents are coming to us, telling us … what’s going on—the political nature now of the Justice Department … talking about the school board issue, about a whole host of issues,” he added.

According to Phillips, two months ago, Jordan said that six FBI whistleblowers approached the committee. Two came forward about a memo related to alleged violence and intimidation at school board meetings, and four in connection to the Jan. 6, 2021, Capitol breach.

“It’s becoming a well-worn trail of agents who say this has got to stop, and thank goodness for them and that American people recognize it, and I believe they’re going to make a big change on Nov. 8,” Jordan said referring to the midterm elections.

In June, Jordan sent a letter to FBI Director Christopher Wray warning that several former FBI officials were coming forward while alleging the agency is “purging” employees who have conservative views.

“In one such example, the FBI targeted and suspended the security clearance of a retired war servicemember who had disclosed personal views that the FBI was not being entirely forthcoming about the events of January 6,” Jordan wrote in a statement.

Jordan appeared on Fox News to reveal his news, which went viral quickly because people were ready to hear some good news. Hopefully, they are willing to go vote as well!