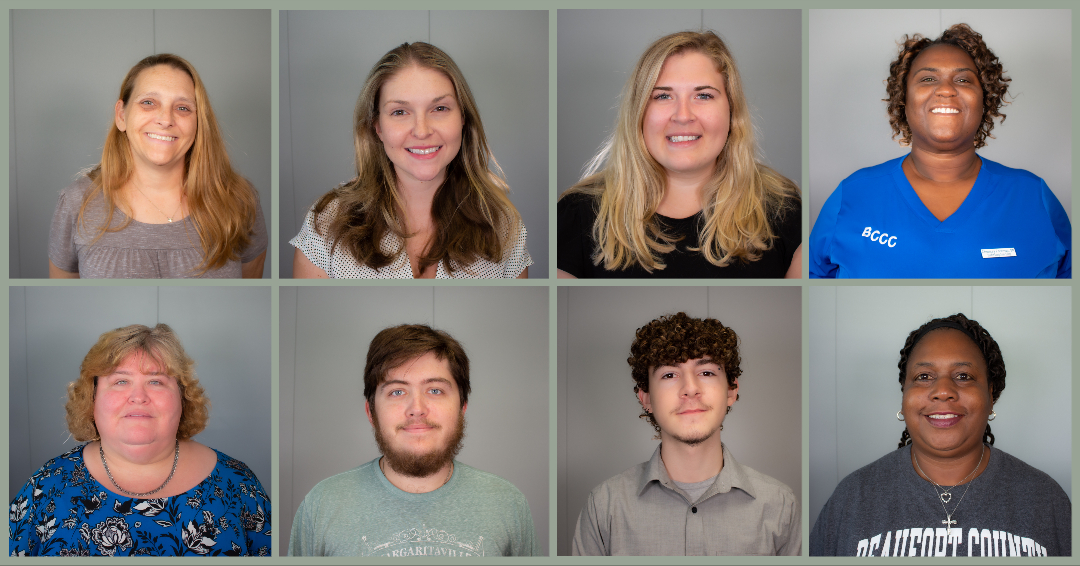 The Beaufort County Community College Foundation is proud to announce these scholarship recipients for the Fall 2022 semester. Other recipients will be announced throughout the fall. Registration is open for the Spring 2023 semester. This will be the final semester of the Beaufort Promise in its current form. Qualified students from Beaufort, Hyde, Tyrrell, and Washington Counties can still receive free tuition and fees beyond 2023. All students can apply for Pell Grants and scholarships by filling out a FAFSA. Students can apply for scholarships for Spring 2023 after they have applied for financial aid by filling out a FAFSA. Scholarship applications are due on Nov. 5.

Janice Brinkley Tyler, 45, received the Marie R. Robinson Scholarship. The Blounts Creek resident is a practical nursing student. She is the daughter of Terri Craig of Blounts Creek and the late Roy Brinkley of Plymouth. She attended Chocowinity High School. The mother of five plans to become a registered nurse.

The Marie R. Robinson Scholarship is for a deserving student in the BCCC Nursing Program. Ms. Robinson, born 1922, was a lifelong resident of Washington, N.C. who graduated from the Tayloe Hospital School of Nursing in Washington and was a Registered Nurse for Beaufort County Hospital until her retirement. She was devoted to her family, her many friends and her nursing colleagues. Her mission was to serve others.

Helaina Britt, 27, received the Myrtle Cutler Jones Scholarship. The Greenville resident is a nursing student. She attended Lumberton High School and plans to work as a nurse. She is the daughter of Mary Lindsay and Bryan Britt of Lumberton. Britt is the partner of Chris Scott.

Cherissa Foreman, 48, received the Coach Bill Lake Scholarship. The Blounts Creek resident is part of the nursing program. She attended Chocowinity High School and holds an Associate in General Education. Foreman plans to become a nurse.

Established in 2018 by the BCCC community in memory of instructor Joseph Alford's mother, Dr. Nancy Alford, this scholarship provides educational opportunities for students demonstrating financial need. Dr. Nancy Boylan Alford was the owner and operator of Carriage House Psychological Associates in Roanoke Rapids. Dr. Alford and her husband Reverend John B. Alford Jr. spent 57 years together. The Alfords want to keep her memory alive and foster the students who feel a sense of purpose by helping others. Scholarships are made available, but not limited, to students in fields such as psychology, sociology, human services technology, and nursing.

Hunter Ledford, 21, received the David Clark and the Coach Bill Lake Scholarships. The Roper resident is part of the mechanical engineering technology program. Ledford attended Northeast Regional School of Biotech and Agriscience (NESRBA) and plans to work as a millwright at Domtar. He is the son of Marty and Jenny Ledford of Roper. Ledford works as a carpenter.

The David Clark Endowment was established in 2011 by Trader Construction Company-New Bern, NC and Potash Corp-Aurora, NC in memory of David Clark. David was a Trader Construction Company superintendent with more than 30 years of industrial construction experience. He was an exemplary employee and an excellent role model for his fellow co-workers. He was also a man of faith, community involvement, and a native of Beaufort County, NC. This endowment is available to BCCC students in any of the industrial technology programs-automotive systems, electrical engineering, electronics engineering, mechanical engineering, or welding.

Hunter Linnen, 18, received the State Employees Credit Union Community College Scholarship and the Gregory Poole Scholarships. The Washington resident is a nursing student. He attended Washington High School and plans to be a travel nurse. He is the son of Michael and Kristin Linnen of Washington.

Jackie McCabe, 56, received the Tayloe Memorial Scholarship. The Washington resident is working toward her Associate in Applied Science in Human Services Technology. She is the daughter of Johnnie and Mayola Harris and the spouse of Michael McCabe. She plans to eradicate family violence.