Sling Blade | Beaufort County Now | This tiny independent film is an enigma. It is also one of the ten most important indies in the last 25 years for one reason: It could not have survived, and prospered without its singular visionary.

“Some Folks Call it a Sling Blade, I Call it a Kaiser Blade.”

This line, spoken by Karl Childers, explains the farm implement that he used to kill his white trash mother and her lover 25 years earlier, when he was still an adolescent. After 25 years in a mental institution (Karl calls it “the nervous hospital“), he is pronounced cured and is released to the streets of the fictional Millsburg, Arkansas, where he finds work, with the help of mental hospital administrator Jerry Woolridge, in a lawnmower repair shop, and meets a young preadolescent boy, Frank Wheatley played by Lucas Black.

Karl Childers, played by the film’s creator and Arkansas native Billy Bob Thornton, strikes up a relationship with Frank by simply helping him carry laundry home from the local laundromat. This simple chance occurrence symbolizes the essence of their relationship: One of profound innocence and simplicity. 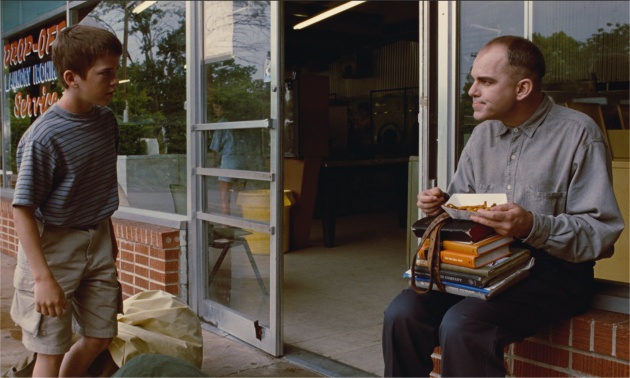 Karl, Billy Bob Thornton, is befriended by Frank Wheatley, Lucas Black, when he helps "the Wheatley Boy" with the family laundry, since the family washing machine was inoperative. Karl later fixed the machine after he moved in the dirt floored garage.

In the initial stage of their relationship, Frank’s mother, Linda, asked her son what he liked about Karl: He answered, “His voice reminds me of a car engine. It stops me from feeling nervous.”

While this may sound trite to many people, this is the essence of Frank and Karl’s relationship. Though mentally challenged and a murderer some 25 or more years earlier, Karl has a good but simple spirit and calms the boy, Frank, who; has lost his father, is raised by a single parent, whom has brought a man, Doyle Hargraves, into their lives, as her “boyfriend,” who is in unequal parts; extremely mean and profoundly ignorant.

The self-obsessed and alcoholic Doyle, played by country crooner Dwight Yoakum, exudes the subtle stupidity that is the essence of white trash. An essential commonality between Karl and young Frank: Karl was raised by white trash and Linda has brought white trash into her family in the person of Doyle. Linda Wheatley, played by Natalie Canerday is not bad person, she is just a women nearing middle age, stuck in a bad relationship with a bad man. This conflict needs resolution and quickly, and, if I might foreshadow a bit, is resolved by the end of the film. 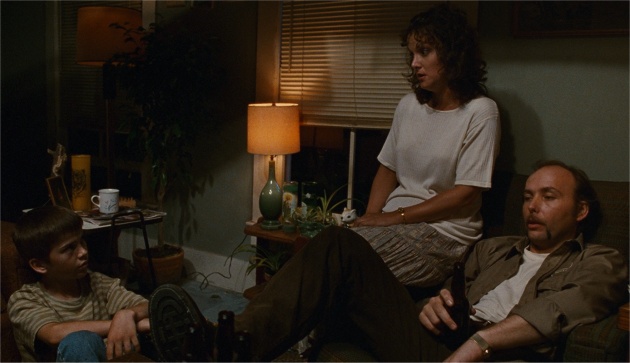 Frank, Linda and Doyle have a "family" discussion that will nearly break your heart - unless you are "white trash."

Karl, who has been living in a spare room at the lawnmower repair shop, is given permission by Linda to allow Frank to give Karl a new home in the Wheatley family shed behind their simple frame house. One wonders would young Frank would so compelled to bring Karl into his life if not to counterbalance the cruel and stupid Doyle. Regardless, Frank feels safer and calmer when Karl is near.

Simple, yet profound in the sincere connection between these two humans. Billy Bob Thornton, as Karl Childers, does project, through the voice of Karl, the rumble of a well-tuned car engine. In fact, his performance alone makes this film a classic. Without his performance, the film would have been just another well intentioned independent film, that widely missed the mark. 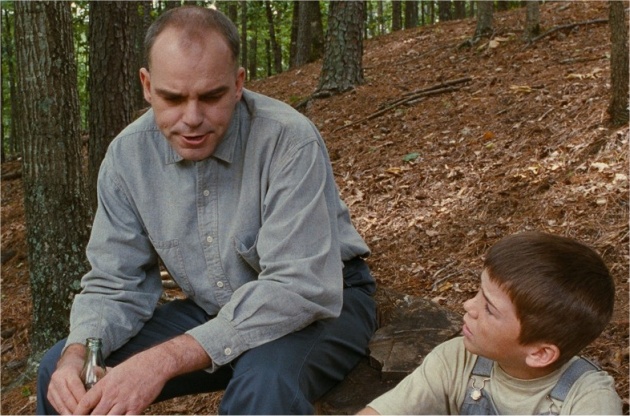 Karl and Frank having one of their intimate conversations at their favorite quiet place in the Arkansas hills. The older Karl and his young friend had a number of things in common, but mostly, they just wanted some peace of mind.

Before I saw this film, I had no knowledge of Billy Bob Thornton. After the many years since the unveiling of this film, I still, on occasion, will break into my rendition of, “You got any mustard for them potaters, hmmm hmf.” I simply cannot help myself. The film had such a profound impact on me, in the regards to the sociologically addictive nature of Billy Bob doing Karl’s “car engine voice,” that I still imitate that voice on other lines from the picture, and, on occasion, on lines I just make them up out of thin air, hmmm hmf.

So I somewhat understand how a young boy, with no father figure, can be swept up into a relationship with a simple, but kind man, who would talk to him about issues they both understood. Karl, while mentally challenged, seemed to transcend the barriers that might keep him out of the boy’s life and the other kind-spirited folks. One commonality of “Sling Blade,” was the fact that Karl was able to communicate an impression of a decent, non-threatening, but simple man with an element of goodness to those people who also embodied some measure of kindness. Those people of a foul nature - like Doyle Hargraves - treated Karl with total disdain. 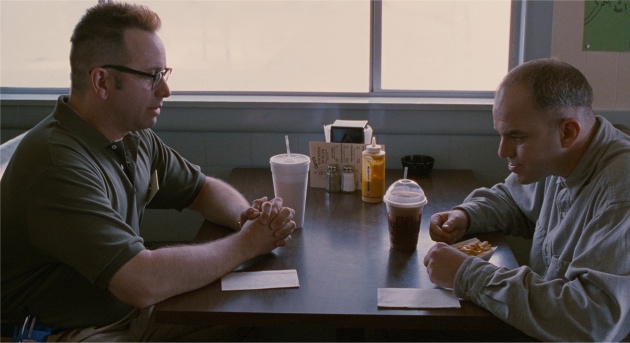 Vaughn Cunningham, John Ritter, and Karl discuss what they might have in common at their luncheon.

When an openly gay Vaughn Cunningham, played by a very sensitive John Ritter, Linda’s boss and best friend, set a luncheon date with Karl to gauge his motives towards the Wheatleys, the conversation rumbled like this:

And later in that luncheon conversation:

I could go on about the dissecting the film as a foil to the injustices of society, but I don’t believe the film was intended as such. I believe that it was intended as an entertaining, well told tale designed to make you consider the sociological moral of your choosing. When Billy Bob wrote his Oscar winning screenplay and directed the film, as well as acting in the film, he just wanted a job and was hoping for additional work if the film was a success. Not only was it the sleeper hit of 1996, it is an unintended classic. If you haven’t seen the film: It’s 135 minutes and 148 minutes of runtime in the director’s cut, and well worth your time, even with all the pregnant pauses to allow the dramatic essence in the cadence of Karl’s diction which, in turn, permits one to ruminate the intention of Karl’s psyche.
Go Back