Published: Wednesday, January 6th, 2016 @ 9:15 pm
By: John Locke Foundation   ( More Entries )
Publisher's note: The author of this post is Barry Smith, who is an associate editor for the Carolina Journal, John Hood Publisher.

NCGA's Boardman tells Chamber meeting revenue is ahead of schedule 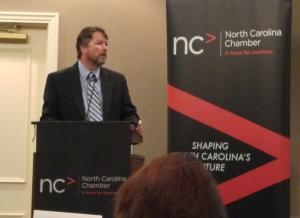 Barry Boardman, the General Assembly's chief economist, speaks to the NC Chamber's tax conference in Durham. (CJ Photo by Barry Smith)
DURHAM — The General Assembly's top economist on Thursday said that, unlike last year, when state tax collections appeared to suggest a shortfall in General Fund revenues, state government is on track to meet its projections for the current budget year.

Although he warned not to read too much into just one quarter of financial figures, Barry Boardman, the legislature's chief economist, said that collections are $40.3 million ahead of schedule for the first quarter. Boardman said that the collections were "essentially on target."

The budget bill passed by the General Assembly this past session projected that the state would collect $21.9 billion in General Fund revenue during the fiscal year that began this past July 1 and ends June 30, 2016.

Boardman addressed the North Carolina Chamber's tax conference at the DoubleTree by Hilton Hotel in Durham.

"I'd rather be on the plus side than the negative side," Boardman said. He said that a year ago, state collections were running below projections, primarily because of a change in the way withholdings were being collected. The state still ended up with a $450 million surplus last year.

Wages and salary collections are coming in higher than expected, along with corporate income tax collections, Boardman said.

"There's nothing out there, at least on the current horizon, that makes us say that we could find ourselves in trouble come next April or next May," Boardman said during a break.

Boardman said if collections "continue on our current trajectory," the General Assembly would have more options available to them on tax and budget policy.

"It's a real exclamation point on pro-growth policies that improve the business climate, will grow the economy, and create more jobs," Ebert said. "You just heard a forecast here today of 115,000 new jobs next year. We haven't seen that since the '90s."

"The real point is, when you make the state more attractive to business, more jobs will come to our state," Ebert said.

Ebert said that some other states have made bad moves with their budget and tax policy, and that has helped North Carolina.

"I think North Carolina is probably in the best position it's been in in probably several decades to be the best state for business," Ebert said. He said the state has had a "responsible tax reduction strategy tied to growth."

Some states did too much too fast, Ebert said. "We've probably done some of the smartest tax reforms in America," he said. "And we're seeing the benefit of it."

Boardman noted that most of the revenue for the General Fund — 51.7 percent — comes from personal income taxes.

Cindy Avrette, a staff attorney for the General Assembly, noted that retiring the state's unemployment insurance debt to the federal government has paid off as well, since both federal and state surcharges on employers were lifted when the debt was retired, she said.
Go Back