Published: Monday, November 13th, 2017 @ 2:42 pm
By: John Locke Foundation   ( More Entries )
Publisher's note: The author of this post is Kari Travis, who is an associate editor for the Carolina Journal, John Hood Publisher.


RALEIGH     The University of North Carolina School of Law's Center for Civil Rights has been unlawfully litigating for 15 years, the N.C. State Bar said Nov. 9.

A Letter of Caution, issued by the State Bar's Authorized Practice Committee, warned UNC Law School Dean Martin Brinkley that the CCR is illegally operating as a law firm. Even so, the State Bar says it will not sue the center at this time.

The notice adds to a vortex of controversy surrounding the center. Just two months ago, the UNC Board of Governors barred the center from entering into any new lawsuits. Under the policy, center attorneys weren't allowed to take new cases, but could complete pending litigation.


The committee's decision was a surprise, said Brinkley, noting that "The State Bar itself has been well aware of the center's work for many years and has never raised a question."

Mark Merritt, past president of the State Bar, now serves as UNC's general counsel. Carolina Journal made several attempts to contact Merritt, but he declined to comment, citing his bar affiliations.

The BOG voted Sept. 8 to bar the CCR from litigating.

An anonymous email addressed to Merritt, outlining concerns about CCR's legal practice, was forwarded Aug. 14 to a few members of the BOG and several reporters and media outlets that cover higher education. WRAL first reported Nov. 8 on the email. Carolina Journal was not sent the initial email, and was unaware of it until the sender, "UPL Lawyer," copied CJ late Nov. 8 (image of email below). 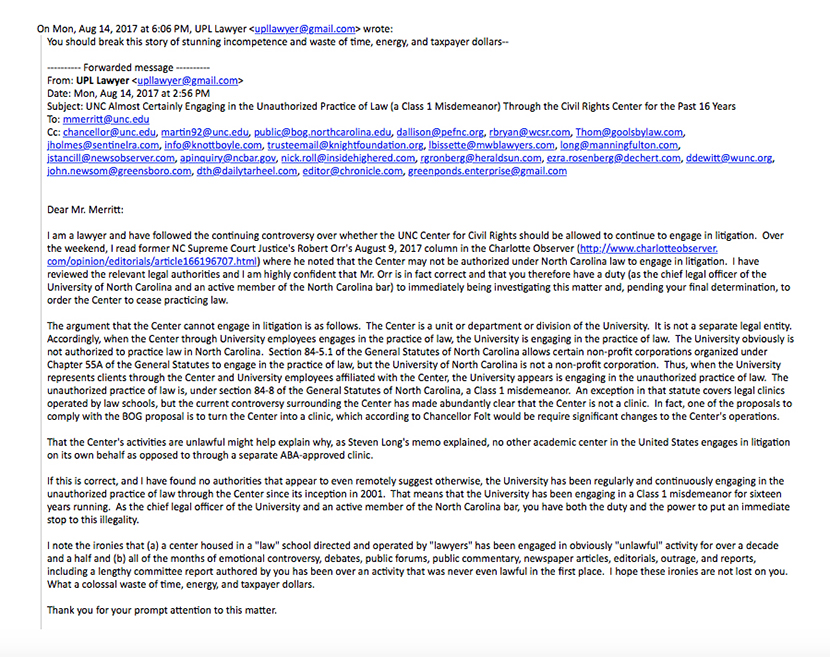 The center has ceased all casework since it was warned of violations by the State Bar, Hicks stated.

Concerns about the CCR's state authorization didn't really factor into the board's decision to bolt the door on their legal practice, said board member Steve Long.

The CCR, established in 2001 to honor civil rights advocate Julius L. Chambers, is an academic research center. The center advocates policies assisting poor and minority communities. It has filed lawsuits against cities, counties, and even school boards, using law students and outside attorneys.

A state organization should not be allowed to sue other state entities, Long said.

Additionally, only legal clinics under the governance of the American Bar Association should be allowed to practice law, he argued in September.

Long has been heavily criticized by CCR supporters. Some called the new policy a political play. Others, including UNC Chapel Hill Chancellor Carol Folt, said shutting down the CCR's law practice would harm UNC's national reputation.

Today, the State Bar's decision is just more proof that BOG members made the right decision, Long told Carolina Journal. It also reveals need for more more board oversight in university operations, he said. UNC administrators often chide the board about micromanagement.

UNC's reputation is more at risk now than ever before, Long said.

"This center is operated by a law school that prides itself on 'obeying the law,' when it turns out their operation did not obey the law."

UNC is already moving CCR casework to firms outside the university, Brinkley said.

The law school has done nothing wrong, he added.

The center's lawyers are fully qualified to practice, and law students have always been properly supervised when appearing in court, he told CJ.

"The bar has known of the center's work throughout its existence, and has even certified UNC law students for credit for work done as externship. The Bar Committee was also aware of the fact that the center's legal advocacy work is imminently moving out of the law school, rendering any issues that the anonymous complaint effectively moot. One can speculate as to what compelled the State Bar's Committee on Authorized Practice to take this action."
Go Back