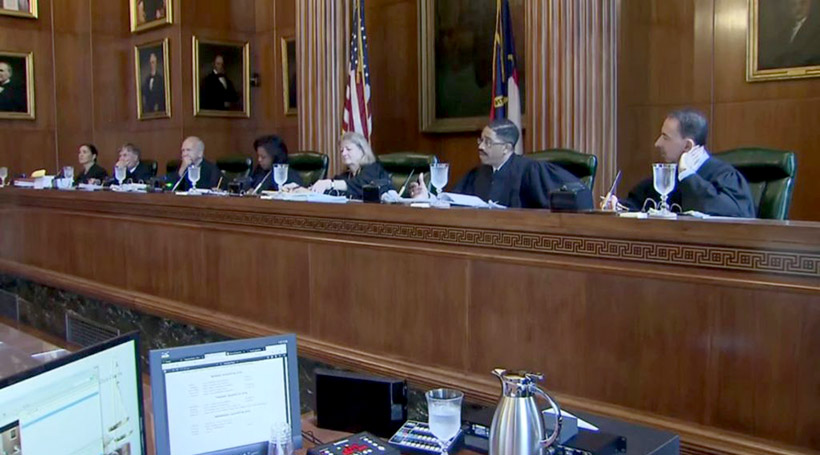 When selecting justices to sit on North Carolina's highest court, it helps voters to have access to that court's decisions in major cases.

Thus it's unfortunate that many disputes that headed to the N.C. Supreme Court last year remain unresolved.

With the court's next opinion release day set for Friday, almost half of the cases argued in 2019 have yet to produce a ruling. Cases remaining in limbo include death-penalty challenges involving the now-repealed Racial Justice Act, a First Amendment dispute involving the Raleigh News and Observer and an SBI firearms analyst, a fight between Lt. Gov. Dan Forest and the state employees' political action group, and the fate of a dubious trust fund overseen by the N.C. attorney general.

Let's turn the clock back one year to put the current situation in perspective. By late February 2019, the N.C. Supreme Court had resolved 83 of 84 cases that had appeared on its calendars for arguments in 2018.

Fast-forward one year. As we approach the end of the second month of 2020, justices have announced their decisions in just 60 of 106 cases that appeared on their calendars during 2019. That's less than 57%.

The numbers look even worse if one factors out cases involving termination of parental rights. A change in state law moved all appeals in these TPR cases directly to the Supreme Court last year. Many of these cases involve no oral arguments. Few require the degree of research and deliberation that go into other cases of state constitutional law.

Drop those TPR cases from consideration, and the court's total 2019 caseload looks similar to 2018. Its percentage of resolved cases drops well below 50%.

Why the drop-off in production of court opinions? One potential factor involves the changing court composition. In the November 2018 election, Democrat Anita Earls unseated Republican incumbent Justice Barbara Jackson. Planning for Jackson's impending departure, the court had an incentive to wrap up as much of its outstanding business as possible before Earls took her oath of office at the beginning of the new year.

2019 brought more changes in personnel, though these were unexpected. Chief Justice Mark Martin resigned in February, prompting a court shuffle that placed Cheri Beasley in the chief's role and added Mark Davis to the court in March. The first opinions from the court's current lineup arrived in May.

An increase in travel time also might have limited the Supreme Court's ability to resolve cases quickly. While the justices took one three-day road trip in 2018, they took three last year. Justices held back-to-back sessions in May in Halifax, Greenville, and New Bern. They took their show on the road to Salisbury, Asheboro, and Winston-Salem in the fall. They also traveled to Greensboro, Hillsborough, and Smithfield before Thanksgiving.

Regardless of the reasons for delays, several dozen cases remain in legal limbo. Among them are legal disputes that could help voters decide whether the Democrat Beasley or Republican Senior Associate Justice Paul Newby should occupy the chief justice's job for the next eight years. Those cases could help determine whether the appointed Democrat Davis wins a full term on the bench. Forthcoming opinions could help determine whether a Democrat or Republican will fill Newby's seat. (Candidates in appellate court elections have decided to run as Democratic and Republican teams.)

Racial Justice Act: The General Assembly nixed a law in 2013 that had helped death row inmates argue that racial bias infected their trials and sentencing. In August 2019, the N.C. Supreme Court heard a half-dozen cases from inmates who wanted to revive the former law to help them avoid capital punishment. None of those cases has been resolved.

Hog fam "slush fund": When Mike Easley was still N.C. attorney general, he negotiated a lawsuit settlement with hog farm owners. It required payments into a special fund the attorney general would control. Current Gov. Roy Cooper controlled that fund during his entire 16-year run as AG, and current officeholder Josh Stein continues to operate it. The Supreme Court heard in November a legal challenge of that fund's existence. The New Hanover County school board argues that any proceeds from such a settlement should have funded local schools.

Forest's campaign ad complaint: Lt. Gov. Dan Forest's first run for statewide office in 2012 prompted a lawsuit against the political committee tied to the State Employees Association. Forest argued that a television ad touting his opponent had failed to comply with a "stand by your ad" disclosure law. A win in the case could force the employees group to pay Forest's campaign. The Supreme Court heard the case in November.

First Amendment and investigative journalism: A firearms analyst with the SBI won a multimillion-dollar verdict against the Raleigh News and Observer, after a jury decided that a reporter willfully maligned the analyst in a series of stories. Free-press advocates have warned about the case's potential chilling effect on their work. Courts have agreed to date that the journalistic errors in the case deserve no legal protection. The Supreme Court heard arguments in November.

Other outstanding cases involve the release of student sexual assault disciplinary records at the University of North Carolina at Chapel Hill, payments linked to the N.C. Department of Transportation's Map Act cases, an eminent-domain dispute involving the city of Charlotte, a class-action lawsuit involving billing at Greensboro's largest hospital, and a case involving retirement spiking in N.C. governments.

These cases could have major impacts on N.C. voters. Some of the rulings could influence Supreme Court election campaigns.

Let's hope that we'll learn how at least some of them have been resolved by the end of this week.