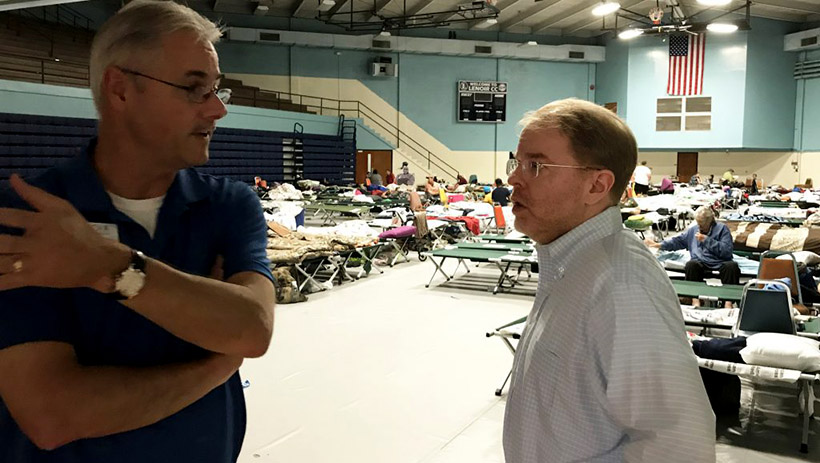 Peter Hans (right) visits a community shelter at Lenoir Community College in Kinston September 20818. At the peak of Hurricane Florence 500 displaced residents were sheltered on the campus. | Photo: Carolina Journal

Asheville-Buncombe Technical Community College has food pantries on its campuses - for its teachers.

North Carolina boasts the nation's third-largest community college system, with 58 community colleges serving 700,000 students. But the state ranked just six places from rock bottom in the nation for how it pays its community college teachers. Now, those employees hope to pass a 5% raise during the General Assembly's short session in late April.

"It's really heartbreaking, that this is reality our facility and staff face," said Beth Stewart, A-B Tech vice president of instructional services. "Unless the state as a whole makes a commitment to doing more for the community college faculty and staff, our hands are pretty much tied."

Job positions remain open for months, sometimes years. A-B Tech buffed its job descriptions and beefed up its benefits - often to no avail. And as more teachers near retirement, Stewart worries a "silver-tsunami" will sweep away irreplaceable staff.

"The cost of living in Asheville is outrageous," Stewart said. "If we're not paying enough, it doesn't really matter. ... People have to live."

To hire a teacher, community colleges must compete with each other, private universities, businesses, and even public K-12 schools.

Things are especially bad in short-term workforce training, which community colleges credit for their first enrollment increase in almost a decade. Businesses often poach their instructors, sometimes by doubling their salaries.

"We have been struggling for years in this area," said Scott Ralls, Wake Technical Community College president. "Just this morning, we lost a key, key position because we can't even get close to the salaries offered. ... They're uniquely underfunded."

That means students aren't getting the classes they need. Ironically, education is often most inaccessible in the very fields that offer the most well-paid jobs.

"If I need to be reskilled or up-skilled, I don't have two, three, four years to do that. I need to provide for myself and my family. These short-term programs address their needs affordably, accessibly," said Peter Hans, N.C. Community College System president. "They can get a skill, get a job, and provide for themselves and their family. It's one rung on the ladder."

At Wake Tech, the waitlist for the school's automotive program is almost as large as the program itself. Ralls plans to double the size of the program to meet student demand, but he worries about recruiting instructors. He says people often laugh at his salary offers.

"If we're paying them 50% of what they would make doing the job, that's a challenge," Ralls said. "It affects students when they end up on a waiting list instead of a classroom."

But avoiding delays is critical, especially for part-time students. Fewer than a quarter of non-traditional, part-time students graduate, and delays are partly responsible, said Marie Cini, president of the Council for Adult and Experiential Learning, a national nonprofit consultant.

"Momentum will keep you going," said Cini. "But if this course I'm supposed to be taking gets cancelled because there's no one to teach it, I will be angry as a student, expect better, or give up, thinking I'll come back in the fall. And often [students] don't. It's an interruption, and their lives start all over again. It's particularly difficult."

As more industries require skilled labor, workforce education beyond high school is critical. Businesses will need more than 665,000 North Carolina adults to earn a credential or degree by 2030, says a report from UNC-Chapel Hill's Carolina Demography and the John M. Belk Endowment.

Community colleges say they could help meet that need without saddling students with massive loans.

"We're already living close to the bone anyway, and so when you experience financial stress, it becomes critical very quickly," said Tim Wright, Wilson Community College president. "And community colleges are the primary means by which people are able to access opportunity in many, many communities."

The vetoed 2019-20 budget included a 4% raise for community college employees, but the raise remains caught in the budget stalemate between the Republican legislature and Gov. Roy Cooper. Community college leaders now hope to give their employees a 5% raise, which would cost $62 million.

"We feel it's a reasonable request," Hans said. "It's a big price tag, but it's a great investment in our hard-working faculty and staff."

"I've long thought that we should spend more on community colleges," said Terry Stoops, John Locke Foundation vice president and director of education studies. "Our community college system is the most underfunded system of education in N.C. Given how much economic impact it has for the state, it seems we would get a great return on investment."