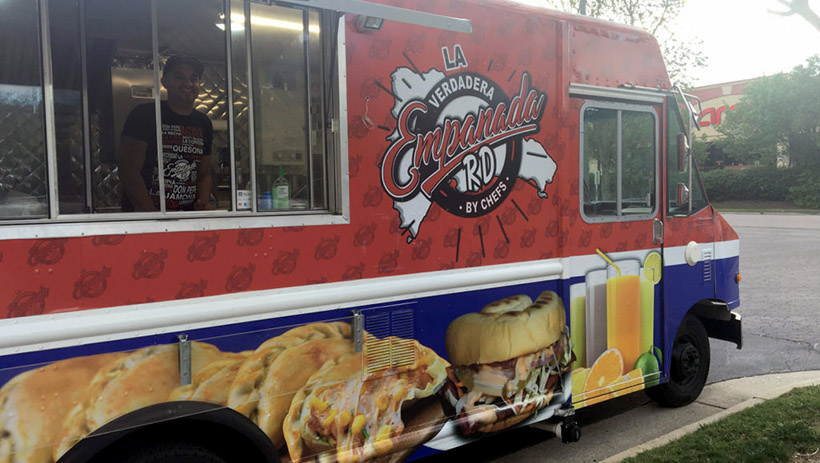 Food trucks are a fixture at breweries, office complexes, and community festivals.

Patios around breweries fill quickly. People head to the bar and, oftentimes, the ubiquitous food truck.

Cary's April Chowdown is canceled. The food trucks still come to places like breweries, but the patios are empty.

The lines are mostly gone, too, a waste of near-perfect weather.

A pandemic, sadly, has that effect on people.

Choi's food trucks had nearly emerged from the November-March "dead season," when mobile food businesses see few customers and usually run deficits they have to make up later in the year.

Choi paid $8,000 in fees to enter his three food trucks into a series of festivals through May and was gearing up to make some money.

"No one saved up money, and we've also made huge deposits, down payments, and fees," Choi said.

The Triangle has some 1,000 food trucks, pre-coronavirus, said Choi, who has served on the board of the RDU Mobile Food Association. Many trucks are parked, and some may be stalled for good.

Some will survive, of course and a new market - people's homes - may help.

Food trucks serve as a convenient alternative for North Carolinians with limited restaurant options. So far, Choi's business is faring better than he expected, though that's relative - truck sales dropped only 30%, due to residential services.

Still, profits may simulate low-season levels, or even lower than that, Adams said. Since the industry's acceleration a decade ago, food trucks have battled regulatory blows from permitting requirements, to commissary rules, to zoning restrictions. A 2018 report from the U.S. Chamber of Commerce Foundation, for instance, ranked Raleigh 11th out of 20 cities surveyed for regulatory ease on food truck operations.

Sam Cerda launched his Empanada RD food truck four months ago, figuring he'd take advantage of the lighter business season to learn the ropes. Things were gliding along smoothly until the first week of March. Now, he feels as though he's starting over.

If he visits an office complex, he might make two sales a day. Breweries, where Cerda made the majority of his total income, now offer pick-up only. Some trucks set up at grocery stores or gas stations. Cerda still parks at the strip mall across the street from the AMC Raleigh 15, a spot he visited frequently while the barber shop was still open. The shop is closed because of social distancing rules, a result of the governor's edict.

"I need to pay bills, and with everything the way it is, I don't think I could last a whole month," he said.

There are some outliers, however.

"They come out to support us," he said. "I guess they also need something to do. We pull in and every parking space is full."

Food trucks depend heavily on cash flow, the mark of a quintessential small business, said Tyler Lee, vice president of the Carolinas Mobile Food Coalition and co-owner of the Fresh Med food truck. Operators usually buy food for their next event with revenue from the previous service.

In Charlotte, some 60% of the city's 200 food truck owners are still serving, Lee said. But even the food truck owners making sales aren't necessarily racking up net gains, he said. If Fresh Med sees 50 customers in one outing, they'll make about $500 - hardly enough to cover staff and other expenses.

Asheville eased restrictions on food trucks last week, allowing them to serve neighborhoods. The city is home to more than 100 food trucks, said Kevin Jennings, who tracks food truck locations on his website and posts job requests he receives through the site onto Facebook.

He estimates 20 trucks are still operating.

In Asheville, only three or four food trucks existed when Jennings first started tracking them seven years ago. But even before the state began quarantining, there wasn't enough work to go around, Jennings said. Every year, some 10 food trucks would slip out of business, and eight more would replace them.

Now they're really taking a hit. Jeff Mcleod, owner of Hit the Pit BBQ in Asheville, said he's doing whatever he can to stay afloat. "It's hard to promote something that's going to gather a crowd right now," he said.

Jennings requests include inquiries from hospitals, who want to offer meal options for medical staff. He also gets requests from apartment and neighborhood managers and from residents themselves who seek alternative food options. Even people who live near a Walmart can't always get the items they want because the store is out of stock, he said.

Many food trucks use social media to notify customers of their locations and service hours. Many also use Street Food Finder; customers can pay online and avoid exchanging cash or cards in person. Several food trucks also space out pickup times via text message.

Tull's customers order online and grab their orders from a table set up about six feet from the truck. Other food truck operators wipe down iPad screens or tap through the transactions themselves, while at the same time managing customer lines to ensure they distance themselves.

Paul Inserra, owner of American Meltdown, closed his business because of plummeting revenue - but also because of health concerns.

Residential services are "hit or miss," Inserra said. His business recently sold six to eight sandwiches over two three-hour service periods. On a recent Thursday, the business received so much service that Inserra was afraid it could be a health concern.

"To be honest, it terrified me," he said, explaining the difficulty in enforcing social distancing from the truck window.

The food trucks offer a welcome alternative from home, but it's unclear how long their popularity will last, said Madison Mundy, program director/board member for the RDU Mobile Food Association.

"It depends on that novelty factor: whether having a food truck in the neighborhood stays novel, or if people get tired of it and stay home," Mundy said. "The hope is that people will continue to support us. And if they do, then we'll pull through."

For Megaloudis, who started his food truck business eight years ago - before the industry boom - success is also about name recognition.

"You have to put your sweat in the business to be known," he said.

Industry experts predict high turnover by the time this all ends, whenever that may be. Many food truck owners are already looking for new jobs. Businesses that hold out will depend on the community's willingness to attend large events after a long period of social distancing.

"The biggest problem is the mentality after this is over. Are people going to want to get into big crowds anymore?" Megaloudis said.

The keys to staying in business come in the form of online transactions and residential services, Adams said. Still, if the government further tightens social distancing restrictions, mobile food services could lose even more business. Rising unemployment will eventually circle back to the food trucks the longer government waits to open the economy.

"We're taking it one day at a time," Adams said.