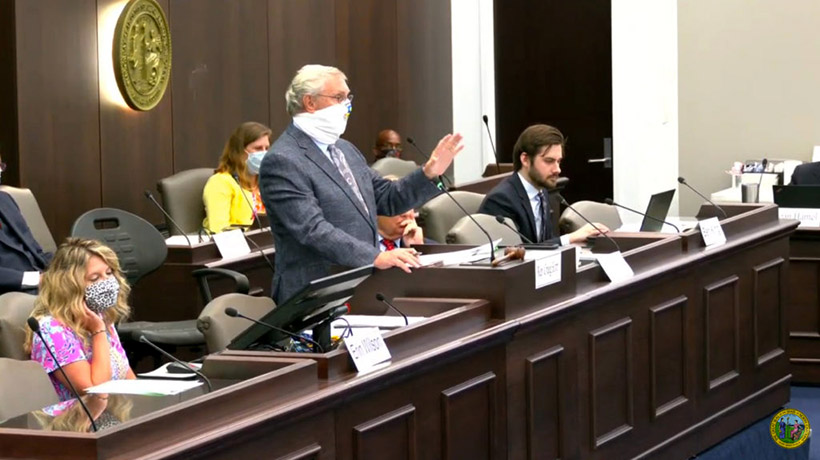 Lawmakers are trying to fix the Department of Transportation's spending problems that triggered mass layoffs, project delays, and chaos in the transportation industry.

On Monday, Aug. 10, the legislature's program evaluation oversight committee debated a draft bill that would direct the Council of Internal Auditing — a division of the state budget office — to improve DOT's audits. The council would have to establish performance standards and monitor compliance. The bill would also require the DOT to give the state transportation board monthly updates on how well it's complying with audits.

The department overspent its budget by $742 million in fiscal 2018-19, according to a May audit report. It lost another $300 million due to fallout from the coronavirus pandemic.

The department's overspending upset the construction industry across North Carolina. The DOT suspended 900 projects last summer, eliminating hundreds of jobs. After the pandemic struck, the department announced it could furlough its entire department in phases, cutting the hours of as many as 9,400 employees statewide.

The DOT boasts the second-largest internal audit team of North Carolina's state agencies. But its auditors haven't completed a performance audit since 2016 — the type of review that could have caught DOT's overspending back in 2018. Instead, the department blew through its budget.

The majority of the department's audits were misclassified or misaligned with standards, says the report. Its auditors risked their independence by blurring the boundary between themselves and management.

"When I went back myself and looked at DOT's reports, very few of them, if any, meet the standards that the law says," said Beth Wood, state auditor. "Of the 389, I would bet you my next year's salary ... that none of them meet the standards."

The department knew it was courting financial trouble in November 2018, but it never slowed spending, Wood told the committee. The Council of Internal Auditing also failed to challenge or investigate the effectiveness of internal audits, says the report.

Republicans asked whether Gov. Roy Cooper has accountability over the department and its oversight problems. Wood argued that the Council of Internal Auditing should be responsible for pointing out deficiencies. The previous transportation secretary resigned.

But the bill is controversial. The Council of Internal Auditing argued that it lacks the staff to provide the requested oversight.

"I have serious concerns about the direction recommended in the report," State Controller Linda Combs told the committee. "We should use caution and not react by adding additional layers of bureaucracy. We should ultimately ask who really owns this problem? It's not the council. ... Ownership of these problems rests with executive leadership."

Wood disagreed. She argued for more effective oversight from the council to help existing internal auditors.

"You can wait for me and my limited staff," Wood said. "Or you can take the 187 internal auditors that we have across the state, that are costing the citizens $18 million, and we can have them performing the same kind of work that my auditors are doing. And we will get to the inefficiencies and wasteful spending much faster."

Lawmakers said they won't be able to push the bill until a new General Assembly takes over in January.

"Anything that we can do to increase transparency and accountability to the benefit of taxpayers and the road building industry is very much needed," state Treasurer Dale Folwell told Carolina Journal. "This whole thing has been about figuring out what's right, getting it right, and keeping it right. They still haven't figured out what's right."

As the meeting opened, committee co-chairman Rep. Craig Horn, R-Union, announced that John Turcotte, who has headed the Program Evaluation Division since June 2007, was retiring.
Go Back