Republicans Got Out and Voted on Election Day, and It Paid Off 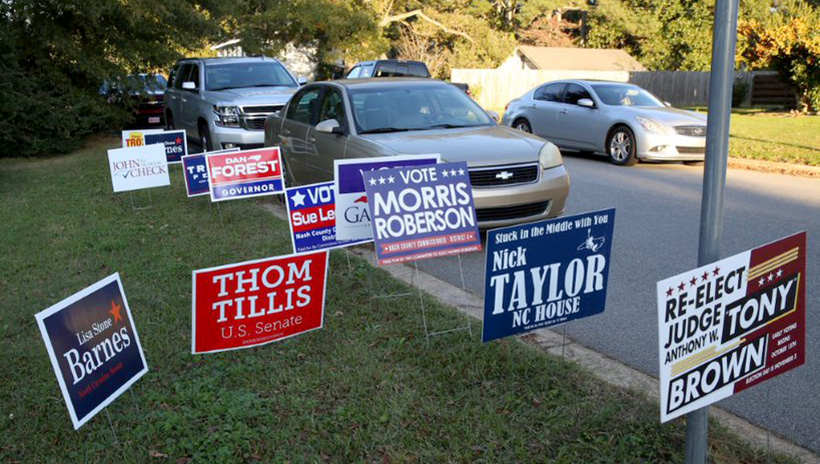 Boots on the ground are worth more than a dollar.

In unofficial results, Trump beat former Vice President (and now President-elect) Joe Biden by 1.4 percentage points — a bigger lead than Trump saw in the RealClearPolitics polling average since Biden locked up the Democratic nomination. Tillis won by 1.8 points. He didn't lead a single RCP average since early June, and he trailed Cunningham by 9.5 points in August.

Candidates and outside parties spent more than $300 million on the Senate race, Republican consultant Nathan Babcock said at a Thursday, Nov. 5, event sponsored by the N.C. FreeEnterprise Foundation. Most of it for Cunningham. Spending by the candidates' campaigns and their affiliated committees? Cunningham's groups spent $47 million. Tillis' spent $18 million.

How did Republicans do it? Election watchers say N.C. Republicans won federal races deploying an old-fashioned "boots on the ground" strategy backed by the precision of targeting technology. The GOP's ground game brought hundreds of thousands more Republicans than Democrats to the polls on Election Day, wiping out leads Democrats had built during two months of mail balloting and 17 days of early voting.

"While our financial investment in support of Sen. Tillis was significant, the stand-out feature of our engagement was our targeted door-to-door canvassing efforts. Primarily targeted swing voters in Triangle and Charlotte, our volunteers had substantive, policy-focused conversations with voters that contributed to Tillis' overperformance in these regions," McCoy said.

By the numbers, McCoy said, AFP Action reached 6 million voters by phone, text, or a knock on the door. Representatives had what McCoy called "more than a half-million substantive, policy-focused conversations" with voters.

At the NCFREE event, political consultant Brad Crone, whose clients include Democrats and Republicans, praised the GOP ground game.

"The Republican turnout operation [was] so more disciplined, so more defined, than anything the Democrats have been able to muster in the [past] 10 years. It was really impressive how Republicans target their voters, look at their base, look at persuadable voters. They got out and mobilized, communicated with them through digital, through mail, through television and cable. Then [they] went out and knocked on doors and followed up with them."

Cunningham's polling lead began to erode when he admitted an extramarital affair. Then he refused to discuss it in the campaign's final weeks.

But the affair came to light months after volunteers from GOP and conservative grassroots groups began making telephone calls, knocking on doors, and leaving fliers on doorknobs to get voters to polling places. Most Democrat-backed groups didn't pound the pavement until Labor Day — or later.

But the rallies boosted confidence in the GOP slate.

David McLennan, professor of political science at Meredith College and director of the Meredith Poll, told Carolina Journal he was surprised that Republicans were much more excited than Democrats to cast ballots.

"Republican enthusiasm appeared to exceed that of Democrats. Polling averages suggested that Republicans were going to have difficulty winning statewide races, but President Trump's support set the tone for down ballot races as Republican candidates outperformed expectations. This also pointed to the [get-out-the-vote] efforts by Republican campaigns and the N.C. Republican Party. The fundraising and expenditure advantage of Democrats was offset by the excellent field work of Republicans," McLennan said.

The process was open and bipartisan. But the districts were Democrat-friendly.

Republicans left the seats available for credible Democrats to win, and they did. Former U.S. Senate nominee and state Sen. Deborah Ross won the 2nd District. Greensboro philanthropist and progressive activist Kathy Manning, who lost a close 2018 race in the nearby 13th District, won the newest version of the 6th.

But those were the only Democratic pickups.

One Tar Heel State freshman will be the youngest member of Congress in modern history. Rep-elect Madison Cawthorn, R-11th District, turned 25 in August. He defeated Democrat Moe Davis, 55%-42%, in a contest filled with insults and bile.

Davis accused Cawthorn of being "comfortable" with white supremacism. Cawthorn denounced "any kind of white nationalism, any kind of Nazism," saying Davis was promoting "bigotry" and "conspiracy theories.

The GOP delegation in 116th Congress will include eight Republicans: