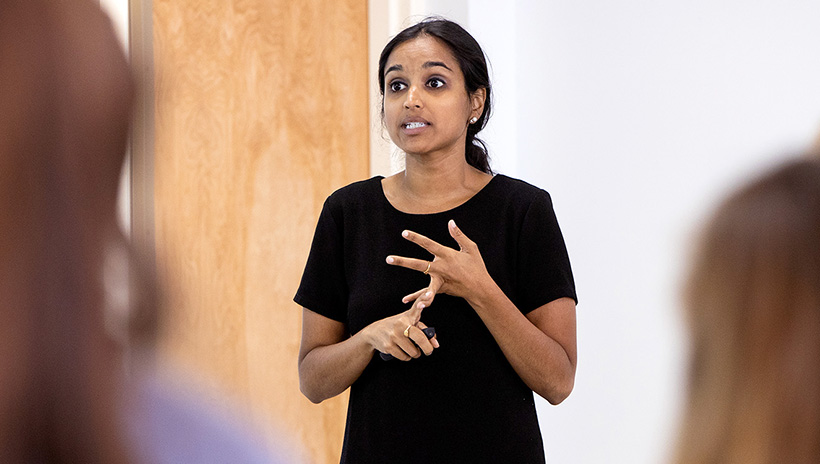 Dr. Bhibha Das, associate professor in the Department of Kinesiology, teaches a class in 2019. Das has fond memories of her appearance on the TV game show “Jeopardy!” and its host Alex Trebek, who died of pancreatic cancer on Nov. 8. | Photo: Rhett Butler

Dr. Bhibha M. Das, associate professor in the Department of Kinesiology, was a contestant on the show in 2011 when she was a postdoctoral researcher at the University of Georgia and had the chance to meet Trebek, the 37-year host of the show who died of pancreatic cancer on Nov. 8. 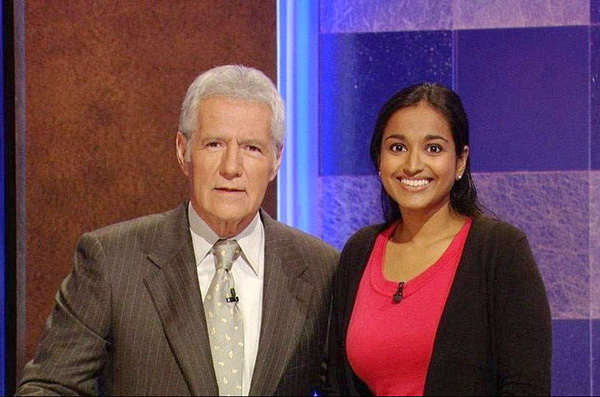 Das, right, is shown with Alex Trebek, host of the TV game show “Jeopardy!” in 2011. | Photo: Jeopardy Productions
"Alex was gracious, kind and funny!" Das said. "He's read thousands of questions to thousands of contestants over the years, but he has this incredible ability to make every contestant feel special on the show despite having done this a thousand times. When Alex and I chatted, he asked about the beauty mark above my lip and remarked how it made me look like Cindy Crawford. It's the only time I've ever been compared to a supermodel; it's a fond memory to carry with me."

As a fan of the show long before she had that personal connection with Trebek as a contestant, Das became emotional when she learned of his death 10 days after he taped his last show.

"Truth be told, I cried," she said. "I know it seems silly but Alex Trebek, for me, wasn't simply a celebrity or game show host. His impact went beyond a game show. He was a cultural icon, and I will definitely miss his voice being part of the soundtrack of my evenings. It's weird watching the pre-recorded shows and knowing he's no longer with us."

Das said she started watching "Jeopardy!" as a child.

"I've always loved trivia and have been a big reader since childhood," Das said. "I played Quiz Bowl from seventh grade to 12th grade, so trying out for 'Jeopardy!' seemed like a fun thing to do."

Das was selected for the show, but before competing, was asked about the proper pronunciation of her name.

"Alex cared so much about the contestants that he realized names and their pronunciations matter," Das said. "It meant so much that Alex Trebek took the time to get my name right the first time around."

She then had to compete against two others in the fast-paced game in which participants respond with questions to answers supplied by Trebek.

"To be honest, it was completely a whirlwind, a surreal experience," Das said of being on the game show. "Those 20 minutes where you are actually playing go by so quickly that it wasn't until I watched my shows that it truly sunk in that I had been on 'Jeopardy!'" 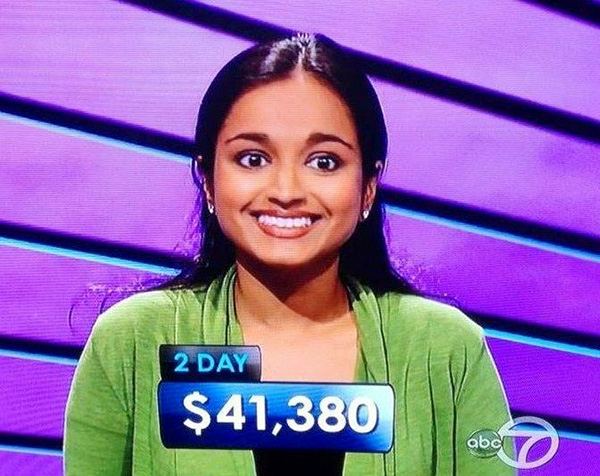 Das is shown in this television screen shot after she won on “Jeopardy!” in 2011. | Photo: Contributed
Das entered the final "Jeopardy!" question with a slight lead, and with the category of word origins, correctly responded "What is companion?" to the clue of a Latin word for friend with whom you would eat bread. She won $20,201.

As the defending champion, she returned for a second show and won an additional $21,179.

"Winning was such an amazing feeling," Das said. "Getting selected to be on the show is the cake. Winning was the icing. Thousands of people try out each year, and not only did I get to appear on the show but I won."

Though nine years have passed, Das continues to take pride in her appearance on the show.

"On the first day of class, when I'm doing an introduction of myself, I always tell my students that I was on the show," said Das, who started teaching at ECU in 2013. "They always get a kick out of it and want to know what I spent my winnings on."

Those winnings had a personal connection for Das when she wagered $1,979 on the final "Jeopardy!" clue during her second show, a unique amount when many wager strategically or everything they had earned up to that point.

"Alex asked me after the show about the odd wager, and I told him it was the year my parents were married and it was a way to honor them because they helped me fulfill this lifelong dream," Das said. "My parents were meticulous about schoolwork, and my sister and I weren't allowed to watch TV unless we'd finished our homework, but 'Jeopardy!' was the exception. They saw the value of the show — beyond simply entertainment. It was a way for my sister and I to learn but also for them, as immigrants, to learn more about American pop culture, literature and history. The Das family will miss Alex Trebek."