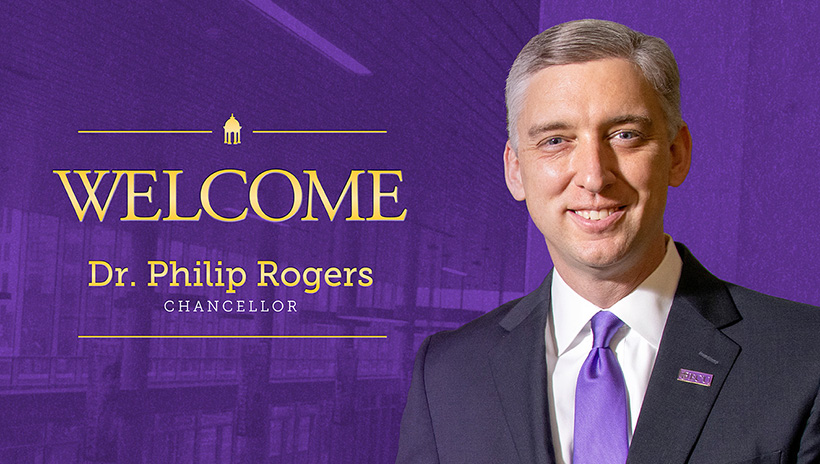 Dr. Philip Rogers, who becomes East Carolina University's 12th chancellor today, plans to listen and learn as much as possible in the days and weeks ahead.

"It's important to be an intentional and active listener during the first few months on the job. I'm eager to ask questions and to engage in both formal and informal learning opportunities with university stakeholders," he said. "I will not have all the answers on day one and that's OK. This will be an incremental process of building the right knowledge base as we develop a collective vision together."

Rogers, who grew up in Greenville and served as ECU's chief of staff from 2008 to 2013, has close ties to ECU and eastern North Carolina. His parents live in Greenville, and he is the great-grandson of an East Carolina Teachers Training School student. His wife, Dr. Rebekah P. Rogers, is a two-time alumna from a family filled with Pirates.

While that familiarity and his passion for the university helped bring him back, he was away almost eight years while serving as senior vice president of learning and engagement for the American Council on Education in Washington, D.C. Listening is a top priority in his first weeks and months, he said.

"I'm excited about that because the best way to be able to make effective decisions about our future and to be able to tell the Pirate Nation story is through the lens and the voices of the people that we serve at this institution, both externally and internally," Rogers said. "I think one of the aspects of campus life I'm most excited about is hearing those stories on the ground from the people who are at this institution and reconnecting with so many familiar faces."

Connecting with students, faculty and staff will happen on their turf, he said.

"I plan as much as possible to meet people where they are," Rogers said. "I have no interest in sitting behind my desk in Spilman all day and having people come to me. I much prefer to be out and about visiting the colleges and schools, being in the classroom, being in a Zoom room, being in the student center or on the mall."

He also believes that engagement has to extend beyond him. "Anyone and everyone, no matter who you are or what position you have, has an opportunity to touch a student directly, whether you're taking their 1 Card in the cafeteria, whether you're welcoming them to the rec center or you're welcoming them to the Boneyard for a football game, you have an opportunity to develop a relationship.

"Developing a culture by which everyone makes an impact on students and develops relationships with students is a way I hope that we can mobilize the entire community around engagement." 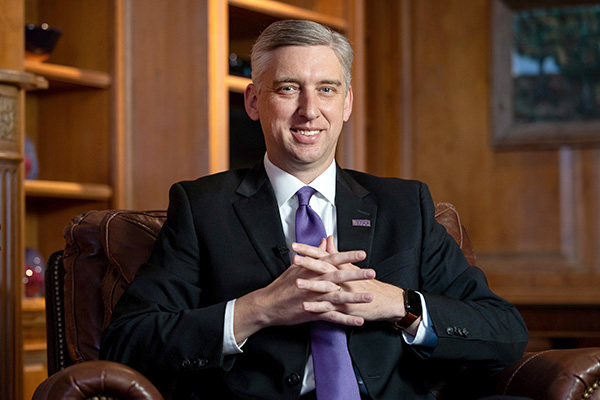 Dr. Philip Rogers grew up in Greenville and served as ECU’s chief of staff from 2008 to 2013. | Photos: Rhett Butler

The changes that Rogers has seen — both from childhood and when he left the university in 2013 until today — have been dramatic and transformative, he said.

As chief of staff, he worked and advocated for several projects that have since been built — the Family Medicine Center, the School of Dental Medicine, the 10th Street connector and the Life Sciences and Technology Building.

"In every direction that you turn this university has transformed before our eyes, and I think the next phase of growth is going to be focused on ensuring that we can sustain and grow the good things we've done over the last 25 years in a post-pandemic era," Rogers said.

Building on ECU's mission of student success, regional transformation and public service remains the focus while dealing with immediate challenges brought on by a yearlong pandemic, Rogers said.

"We will continue to make ECU a smart, agile and adaptive institution in the face of COVID. It will be absolutely prudent," he said.

Assessing, stabilizing and strengthening ECU's finances is top of mind. "This includes how we manage our existing resources but also how we strengthen future revenue streams, including fundraising and smart enrollment growth, leveraging effective strategic partnerships with industry and business, and being thoughtful about our fiscal sustainability over the next decade and beyond," Rogers said.

Another focus is sustaining and advancing ECU's strategy for providing rural health care in the region through the Brody School of Medicine, the College of Nursing, the College of Allied Health Sciences and the School of Dental Medicine.

Finally, ensuring ECU athletics is moving in the right direction academically, financially and on the field is vital for ECU and the region's success, Rogers said.

"I will not have all the answers on day one and that’s OK. This will be an incremental process of building the right knowledge base as we develop a collective vision together."
– Dr. Philip Rogers, ECU Chancellor

Long term, Rogers said his priorities and vision for ECU's future are framed around a deep, personal passion for the university and an intense commitment to its mission.

"I'm proud of my family's rich tradition and history with ECU, so the long-term future of the university is very personal to me," Rogers said. "It's also what I've prepared my entire life for as a leader." 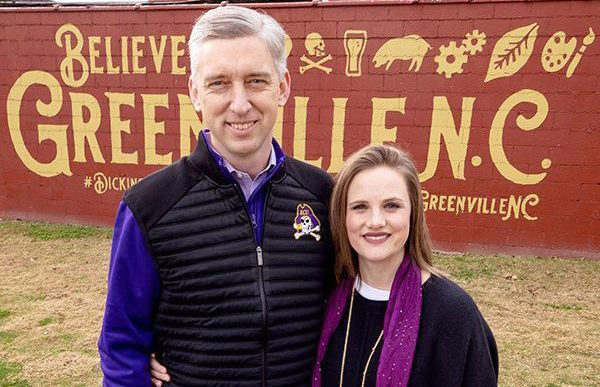 The Rogers family has close ties to eastern North Carolina, and Philip’s wife, Dr. Rebekah P. Rogers, is a two-time alumna from a family filled with Pirates.
In his work with the American Council on Education, Rogers was able to view higher education through a national lens. He said he's confident he's made the right decision to return to ECU and in his ability to leverage networks that he's developed with the knowledge and experiences he's gained to help move the university forward.

Mobilizing the ECU community around a shared set of goals starts with its mission, Rogers said.

"It's abundantly clear to me that the institutions that own their mission and boldly commit to the community that they serve can ultimately drive the most meaningful impact and the most effective financial returns in the long term," he said.

He said it's important for ECU to focus on what it does best — student success, regional transformation and public service — especially in a time of financial constraints, and to tell its story around those expectations in order to thrive in the current higher education environment.

As ECU delivers on its mission, it's important to celebrate the diversity of students, faculty and staff while taking action to help campus more accurately reflect the region that it serves.

ECU also must be future-focused and develop strategies for growth. "We have to be in this for the long game because the higher education environment in a post COVID-era is not going to wait for us," he said. "We have to stay ahead of the curve."

As an example, ECU has been a leader in distance education for many years and remains well positioned from a digital learning and online program standpoint. But because of the pandemic, the rest of the market has exponentially increased its ability to deliver on that same value to future and current students. "We're going to have to think very strategically about how ECU stays front and center in the virtual learning space," Rogers said. 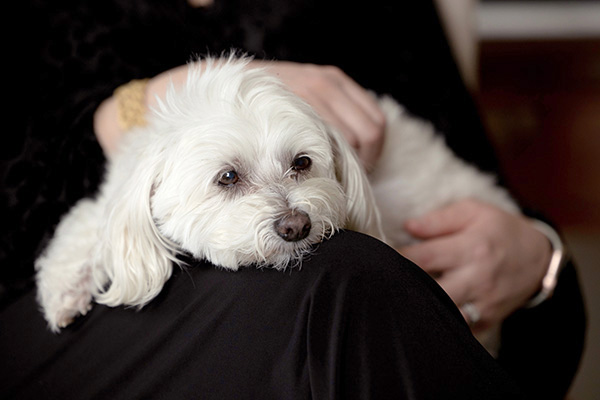 The family dog, Walter, sits on Rebekah Rogers’ lap.
ECU also must embrace and cultivate innovation in order to succeed. Along with the Research and Innovation Campus and Intersect East, how can ECU connect its entrepreneurial spirit to emerging academic and student success innovations, Rogers asked.

He wants to leverage predictive data analytics to make strategic decisions to help drive retention and graduation rates, as well as other key university business metrics. And as financial issues continue to plague colleges and universities across the country, ECU "will continue to be pushed to think creatively about alternative sources of revenue and what the higher education business model looks like into the future," Rogers said.

Those goals should be accomplished within a culture of a people-first mindset, Rogers said.

"You can't be future focused and innovation driven without an ability to be good agile decision makers and being able to drive that work forward," he said. "So I'm open and interested to have a collective community dialogue about all of those things and to leverage the skills, the talents and the good minds at the university to get us there."

Since his appointment in December, his phone has buzzed more than ever in his lifetime.

"To say we've received a warm welcome back home to East Carolina University is the understatement of the year," Rogers said. "We feel loved, supported and ready to get to work in collaboration with everyone on campus and beyond."

Rogers, his wife and their sons, Grayson, 5, and Dean, 2, moved back to Greenville about three weeks ago. Their sons are true Pirates, already singing ECU's fight song from start to finish and wearing purple most days, not unlike their dad.

"I was that child in the end zone of Dowdy-Ficklen Stadium wrestling for extra point footballs before the Boneyard existed," Rogers said. "It was just a part of who we were growing up in Greenville. It's just what you do. You're fully invested."

Growing up surrounded by ECU helped frame Rogers' view of the world and ultimately led him to pursue higher education as a career.

"It's one thing to think about what ECU means to you growing up in the nature of and the spirit of being a Pirate, but it's another thing to have lived and embraced the true impact of what the university can have on your life as an economic driver, as a social driver and as a cultural driver within the region," he said.

While Rogers had opportunities to join other institutions over the past decade, his heart was at ECU.

"There's just not the tug in my gut and the passion in my soul to want to do the work anywhere else," he said. "I'm ready to get to work. There's just nowhere else in the vast universe of American higher education that I would rather make an impact than East Carolina University."
Go Back