Voucher Advocates Will Continue Fight | Beaufort County Now | Supporters of North Carolina's fledgling Opportunity Scholarships program see the motion granted Friday by a Superior Court judge placing the plan on hold as little more than a temporary setback. Advocates of the 2013 measure, which would have provided up to 2,400 low-income public school...

Published: Wednesday, February 26th, 2014 @ 4:08 pm
By: John Locke Foundation   ( More Entries )
Publisher's note: The author of this post is Barry Smith, who is an associate editor for the Carolina Journal, John Hood Publisher.

Attorney says Friday court setback is 'end of the beginning' 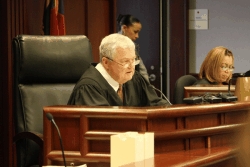 Superior Court Judge Robert Hobgood listens to arguments Friday before deciding to halt temporarily the state's Opportunity Scholarships program. (CJ Photo by Dan Way)
RALEIGH     Supporters of North Carolina's fledgling Opportunity Scholarships program see the motion granted Friday by a Superior Court judge placing the plan on hold as little more than a temporary setback. Advocates of the 2013 measure, which would have provided up to 2,400 low-income public school students tuition subsidies to attend private schools, vow to fight on.

Superior Court Judge Robert Hobgood granted a motion by opponents of Opportunity Scholarships, aka vouchers, to issue a preliminary injunction against the law taking effect until the case goes to trial. Lawsuits were filed by the N.C. Association of Educators, the N.C. School Boards Association, and others claiming, among other things, that the scholarships violated a provision in the state constitution requiring money in the public school fund to be spent only on public schools.

The immediate impact of the ruling is that the initial awarding of the $4,200 scholarships, which was scheduled to take place March 1, will be delayed. A lottery was needed to choose recipients because more than 4,300 families applied for the 2,400 slots.

So what's next for the families who had hoped that Opportunity Scholarships could help offset the cost of private school tuition?

"We don't know yet," said Dick Komer, an attorney for the Institute for Justice, a public-interest law firm that intervened on behalf of two parents who sought Opportunity Scholarships for their children. "I think it's sort of [been] put on hold for a while."

Komer said attorneys supporting the Opportunity Scholarships would appeal the ruling and do their best to resolve the legal issues in time for the fall opening of the 2014-15 school year. "This is not the end of this litigation," Komer said. "It is merely the end of the beginning."

Renée Flaherty, another IJ attorney representing the parents, added, "We believe the judge has misread the text of the North Carolina Constitution. It in no way prohibits the creation of innovative programs such as the Opportunity Scholarship Program that give our poorest families additional educational options."

While Hobgood had not published his order by press time, Komer noted that the judge questioned attorneys about the funding mechanism the General Assembly used to underwrite the scholarships. The state budget passed in 2013 shifted $11 million from the state's school fund, which pays for PreK-12 public schools, to higher education, where it was set aside for Opportunity Scholarships.

The wording of Hobgood's order may be crucial, Komer said. Whether the scholarships could be resurrected quickly "really depends on if there's any wiggle room in his decision for the legislature to fund the program in a different way," he said.

Rep. Paul "Skip" Stam, R-Wake, who introduced the Opportunity Scholarships bill, said he's hopeful any legal concerns can be addressed by the General Assembly during this year's short session, which begins May 14.

The Opportunity Scholarships program approved by the General Assembly last year and signed by Gov. Pat McCrory would allow parents from low-income families to receive a scholarship of as much as $4,200 to be applied to a private school tuition.

Stam said that Hobgood's injunction might stop the administrative process of awarding Opportunity Scholarships. "If that's his rationale, that can be fixed in time for the money to go on in the fall," Stam said.

"The funding issue, arguably through some other type of legislation, might be remedied," Orr said. "It doesn't resolve the numerous other constitutional issues that have been raised."

Orr put his stamp of approval on Hobgood's ruling.

"We're very pleased," Orr said. "I think the court made the right decision."

Rodney Ellis, one of the plaintiffs in the case and president of the N.C. Association of Educators, said in a statement: "This legislation seeks a radical shift in diverting public education funds desperately needed in our public schools to private schools."

Ellis continued, "We appreciate that the court is not willing to disrupt the fundamental principles of public education that have been in place in North Carolina since 1868."

Supporters of Opportunity Scholarships expressed disappointment in the ruling.

"We are deeply disappointed on behalf of the thousands of working-class families who desired this educational option," said Darrell Allison, president of Parents for Educational Freedom in North Carolina. "Rest assured we will not rest, we will not yield until every parent and child from a poor or working-class background has the same educational opportunities that many of their wealthier peers have."

"The decision, in effect, robs educational opportunity from those students who need it most," Lt. Gov. Dan Forest said in a statement. "The Wake County Superior Court sentenced the children of failing schools to a path of no options, no hope, and no future."

House Speaker Thom Tillis, R-Mecklenburg, also weighed in. "My disappointment in the court's decision is only outweighed by the impact this will have on families that had already applied to participate in this program next year," Tillis said in a statement. "This will only serve to trap underprivileged children in low-performing schools where they will continue to fall behind their peers."
Go Back