Independence Day | Eastern North Carolina Now | We all recognize the 4th of July as Independence Day - as the day we declared our independence from England. We celebrate the Declaration of Independence has since become our nation's most cherished symbol of liberty.

Login to Send a Private Message to Diane Rufino
We all recognize the 4th of July as Independence Day - as the day we declared our independence from England. We celebrate the Declaration of Independence has since become our nation's most cherished symbol of liberty.

"Taxation without Representation!" That was the issue that prompted our secession from England. The American colonies were forced to pay taxes to King George III without being allowed any representation in Parliament, in violation of the English Bill of Rights. Soon opposition to the taxes grew, the Sons of Liberty was formed in Massachusetts, and then groups emerged in every state. Simple acts of civil disobedience such as the Boston Tea Party and the harassing the agents who collected the tax for the King gave rise to the battle cry "No Taxation without Representation!" As dissatisfaction grew, British troops were sent in to quell any signs of rebellion, and repeated attempts by the colonists to resolve the crisis without war proved fruitless. The colonies were not going to surrender their freedom and it was clear that their glorious stubbornness was going to lead to rebellion. As John Adams would later say: "The Revolution was effected before the War commenced. The Revolution was in the minds and hearts of the people..... This radical change in the principles, opinions, sentiments, and affections of the people, was the real American Revolution."

The original resolution was introduced by Richard Henry Lee of Virginia on June 7, 1776, and called for the Continental Congress to declare the United States free from British rule.

On June 11, 1776, the colonies' Second Continental Congress meeting in Philadelphia formed a committee with the express purpose of drafting a document that would formally sever their ties with Great Britain. The committee included Thomas Jefferson, Benjamin Franklin, John Adams, Roger Sherman and Robert R. Livingston. It was understood that Adams, the brilliant lawyer, would craft the document, but he insisted that Jefferson should write it instead. He gave him three reasons why it had to be him: "Reason first, you are a Virginian, and a Virginian ought to appear at the head of this business. Reason second, I am obnoxious, suspected, and unpopular. You are very much otherwise. And reason third, you can write ten times better than I can." And so Thomas Jefferson wrote the Declaration.

On June 28, Jefferson's draft was read in Congress, and shortly after that, there was some debate and revision. On July 2, the Continental Congress met inside Independence Hall and formally declared independence from England, resolving that "these United Colonies... are absolved from all allegiance to the British Crown, and that all political connection between them and the State of Great Britain is, and ought to be, totally dissolved." Ironically, as the Continental Congress was declaring the independence of the American colonies, the British fleet and army were arriving in New York.

The Continental Congress continued making revisions for another day or two and on July 4, it officially adopted the final version of the Declaration of Independence.

The following day, copies were distributed and, on July 6, "The Pennsylvania Evening Post" became the first newspaper to print the exquisite document. On July 8, 1776, the first public reading of the Declaration was held in Philadelphia's Independence Square and was followed by the ringing of bells and music.

But independence was not won until General Cornwallis surrendered to General George Washington at Yorktown in 1781 to end the Revolutionary War. The Treaty of Paris was signed on September 3, 1783 to officially end the war and dissolve the bonds of dependence. That Treaty, which was signed by an agent of Great Britain and the American agents Benjamin Franklin, John Jay, and John Adams (the "American Peace Commissioner"), stated: "His Brittanic Majesty acknowledges the said United States, viz., New Hampshire, Massachusetts Bay, Rhode Island and Providence Plantations, Connecticut, New York, New Jersey, Pennsylvania, Delaware, Maryland, Virginia, North Carolina, South Carolina and Georgia, to be free sovereign and independent states, that he treats with them as such, and for himself, his heirs, and successors, relinquishes all claims to the government, propriety, and territorial rights of the same and every part thereof." 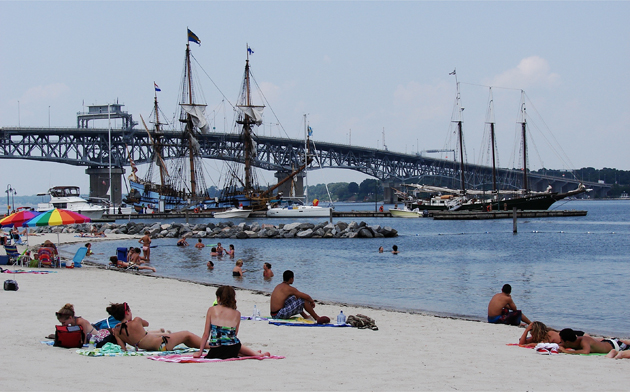 Nothing speaks to the promise of America more than this image of young Americans, in the the prime of their life, lounging on the sandy beach alongside the York River, where French Ships, in 1781, once stood defiant as a blockade against Lord Corwallis's British Army completely encapsulated between these French expeditionary forces and General George Washington's entire army landward. Two replica's of those French vessels remain docked in the colonial town of Yorktown, Virginia, which is little changed from those heady days: Above. General Washington's artillery still placed upon the weathered redoubt of that Yorktown battle field: Below.     photos by Stan Deatherage 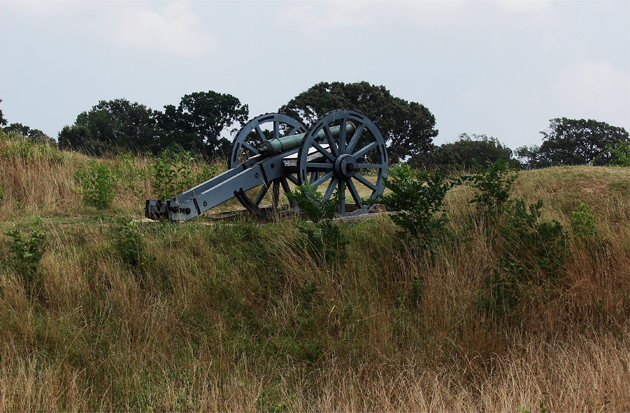 The custom of celebrating the 4th of July started in Philadelphia one year after the signing of the Declaration and it eventually spread to other towns, both large and small, where the day was marked with processions, oratory, picnics, contests, games, military displays and fireworks. Observations throughout the nation became even more common at the end of the War of 1812 with Great Britain.

We associate the Declaration of Independence with Independence Day. It has since become our nation's most cherished symbol of liberty.

Sadly, on June 24, 1826, Thomas Jefferson sent a letter to Roger C. Weightman, declining an invitation to come to Washington, D.C., to help celebrate the 50th anniversary of the Declaration of Independence. It was the last letter that Jefferson, who was gravely ill, ever wrote. In it, Jefferson says of the document: "May it be to the world, what I believe it will be ... the signal of arousing men to burst the chains ... and to assume the blessings and security of self-government. That form, which we have substituted, restores the free right to the unbounded exercise of reason and freedom of opinion. All eyes are opened, or opening, to the rights of man. ... For ourselves, let the annual return of this day forever refresh our recollections of these rights, and an undiminished devotion to them."

Thomas Jefferson died on July 4, 1826, the 50th anniversary of the Declaration of Independence, the brilliant document that defines our nation's character. A few hours later, John Adams would also pass away.

Congress established Independence Day as a holiday in 1870, and in 1938 Congress reaffirmed it as a holiday, but with full pay for federal employees. Today, communities across the nation mark this major midsummer holiday with parades, firework displays, picnics and the playing of the "The Star-Spangled Banner" and marches by John Philip Sousa.

Contrary to popular myth, the men who signed the Declaration of Independence were not great Americans. Instead, they were great Englishmen. In fact, they were as much English citizens as Americans today are American citizens. It's easy to forget that the revolutionaries in 1776 were people who took up arms against their own government.

So how is it that these men are considered patriots? Well, the truth is that their government - the British Crown and Parliament - didn't consider them patriots at all. Their government considered them to be bad guys - traitors - all of whom deserved to be hanged for treason.

If our Founders had indeed been captured and tried for high treason, they certainly faced the hangman's noose. Actually it was quite worse than that. In England, the crime of high treason was punished most cruelly and barbarically. Those accused (usually found guilty by a panel of judges appointed by the King) would first be hanged almost to the point of death. Then they would be temporarily revived only to be emasculated, disemboweled, beheaded, and quartered (chopped into four pieces). Sometimes the accused would simply be hung (almost to the point of death) and then disemboweled and/or drawn-and-quartered. Their remains were often displayed in prominent places across the country, such as London Bridge. For reasons of public decency, women convicted of high treason were simply burnt at the stake.

Most of us consider the signers of the Declaration of Independence to be patriots because of their courage in taking a stand against the wrongdoing and tyranny of their own government, even risking their lives in the process. Yet not even the patriotism and courage of these English citizens constitutes the foremost significance of the 4th of July, any more than the military victory over their government's forces at Yorktown does.

Instead, the real significance of the 4th of July lies in the expression of what is undoubtedly the most revolutionary political declaration in history: that man's rights are inherent, God-given, and natural and, thus, do not come from government. Government derives its authority from the people and serves them. Government doesn't serve itself.

The Declaration of Independence upended that age-old notion of rights. All men -- not just Americans -- have been endowed by God and nature, not government, with fundamental and unalienable rights. Governments are called into existence by the people -- and exist at their pleasure -- for one purpose: to protect the exercise of these inherent rights.

What happens if a government that people have established becomes a destroyer, rather than a protector, of their rights? The Declaration provides the answer: It is the right of the people to alter or even abolish their government and establish new government whose purpose is the protection, not the destruction, of people's rights and freedoms.

The Constitution and the Bill of Rights must be construed in light of that revolutionary statement of rights in the Declaration of Independence. The American people used the Constitution to bring the federal government into existence but also, simultaneously, they used that document to limit the government's powers to those expressly enumerated in the Constitution. With the Constitution, people limited the powers of their own government in a formal, structured way, with the aim of protecting their rights and freedoms from being infringed upon by that same government.

Even that was not sufficient for the American people, however. As a condition for approving the Constitution, they demanded passage of the Bill of Rights, which emphasized two deeply held beliefs: (1) that the federal government, not some foreign entity, constitutes the greatest threat to the rights and liberties of the American people; and (2) that the enumeration of specific rights and liberties, both substantive and procedural, would better ensure their protection from federal infringement.

On the 4th of July we celebrate the patriotism and courage of those English revolutionaries who were willing to pledge their lives, fortunes, and sacred honor in defense of the most revolutionary declaration of rights in history -- that man's rights come from God and nature, not from government.

Jacob G. Hornberger, "The Real Meaning of the Fourth of July," Lew Rockwell, July 4, 2008. Referenced at:
http://www.lewrockwell.com/hornberger/hornberger149.html (A good portion of the article is taken directly from this article by Jacob Hornberger)
Go Back