Wind Farm Officials Differ On Need for Subsidies | Beaufort County Now | Despite earlier claims by Iberdrola Renewables officials that the $400 million, 300-megawatt Amazon Wind Farm that will cover 22 acres near Elizabeth City would be built totally from company funds, another Iberdrola official says the project requires some tax incentives to be viable economically.

Published: Monday, October 19th, 2015 @ 9:09 pm
By: John Locke Foundation   ( More Entries )
Publisher's note: The author of this post is Dan Way, who is an associate editor for the Carolina Journal, John Hood Publisher. 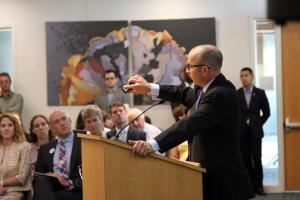 CJ Photo by Dan Way
Craig Poff, a director of business development for Iberdrola Renewables, addresses a Sept. 16 meeting of the N.C. Energy Policy Council.
RALEIGH     Despite earlier claims by Iberdrola Renewables officials that the $400 million, 300-megawatt Amazon Wind Farm that will cover 22 acres near Elizabeth City would be built totally from company funds, another Iberdrola official says the project requires some tax incentives to be viable economically.

"If wind is so competitive today, do you still need the federal, state, and local tax subsidies that you're getting? Would you build this project without them?" asked council member John Brodman, an economist who is a retired deputy assistant secretary at the U.S. Energy Department.

"This project clearly would not happen without those support mechanisms. We're not at a point yet where we don't need subsidies," Thumma responded.

That conflicts with a statement Iberdrola Renewables spokesman Art Sasse previously made to Carolina Journal that "there are no incentives at any level" for project development.

Craig Poff, Iberdrola Renewables director of business development for the Mid-Atlantic and Southeastern U.S., was quick to add: "There is no state subsidy there. That project does not qualify for the state [renewable] investment tax credit."

However, if the project, being built in Perquimans and Pasquotank counties, is operational by the end of 2016, it could qualify for a 30 percent federal tax credit.

Poff added that local tax abatement agreements "would be necessary for any wind project in the state of North Carolina based on the way the business personal property taxes are assessed in North Carolina." Poff said our property tax structure makes the state less competitive with other states in the region and nationwide.

Poff argued that the financial inducement was more of "a tax issue than a renewable energy or project level issue."

Due to an economic development incentive grant, Iberdrola Renewables' property taxes "will be about $500,000 per year, split between both Pasquotank and Perquiman counties, and that will make us the largest taxpayer in both of those counties by a pretty good margin," Poff said.

Tommy Harrell, a Perquimans County farmer who opposes the wind farm, asked Poff the amount of financial benefits Iberdrola Renewables would receive from his county.

After refunds for investment and job creation, Iberdrola Renewables would pay about $5,000 per turbine per year, or about $250,000 in year one, Poff said. "We will be the largest taxpayer in Perquimans County by a factor of three."

In light of the tax rebates, Harrell asked how much existing power capacity production would be replaced by renewable energy from the wind farm. Online retailer Amazon is purchasing the power for its data center in northern Virginia.

"I don't know that anyone on Earth could respond to that accurately," Poff said.

Pasquotank County Commissioner Lloyd Griffin said at the current tax value, the property on which the wind farm will be located normally would generate about $1,001,500 in tax revenues per year. But the tax rebate would reduce the county's tax collections from the site to about $209,000 annually over 30 years.

Griffin said he's also troubled that North Carolina and Pasquotank and Perquimans counties "get zero opportunity for any sales tax or use tax off of this" because the power that the wind farm would generate will be placed on the electric grid in the Northeast. Site work companies and other contractors are coming from out of state, he said.

Griffin said the Energy Policy Council should provide more assistance and guidance to local governments for these large-scale, renewable projects.

"As we moved through the process, the county commissioners, I feel, did not have a support staff in Raleigh," Griffin said.

"When our staff would call [the Department of Environmental Quality] for help, nobody on staff could help," Griffin said. County officials got the same lack of assistance from other state agencies, he said.

"I think the policy has listened to the industry instead of going out into the communities to find out actual needs," Griffin said. "There's something wrong with the system here."

DEQ Secretary Donald van der Vaart said current law requires his agency to issue permits for wind projects, but this project predated the law and was grandfathered out of the process.

"We didn't have any authority to provide input. We would be going forward with a new project," van der Vaart said.

Excavation has started for construction on the 300 megawatt project, Poff said.

"Late this year we'll be focusing on road construction. Foundations will begin in January of 2016" for substation infrastructure in a 208 MW first phase, Poff said.

Between six and eight wind turbines will arrive in late May, with construction commencing in late June. Their rotor diameter is 374 feet, and at their tip the turbines will be 492 feet tall.

"We will be commissioned and fully operational by the end of 2016," he said.

The project involves about 60 landowners who will receive some $600,000 in lease payments annually.

He said wind "is increasingly competitive with other resources," and as a free fuel source it would not get more expensive, unlike natural gas or fossil fuels, whose prices rise and fall unpredictably on the market.

Amazon "was driven by some of its environmental goals as well as the competitiveness of the price we are offering" in agreeing to buy the power produced at the facility, Thumma said.

"But lastly, the main driver has been renewable energy requirements in states," he said.