Teachers who made a difference: Bob Dunning 7th Grade Teacher and Hero | Beaufort County Now | This is what I call making a difference. If you are or have ever had a teacher like this, say a private or public thank you if they are still around.

Teachers who made a difference: Bob Dunning 7th Grade Teacher and Hero 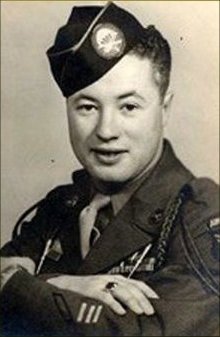 Bob Dunning in the 101st Airborne
This is what I call making a difference. If you are or have ever had a teacher like this, say a private or public thank you if they are still around.

One of my greatest regrets about the old Grammar days at Mary Lin was that I never went back to look up Mr. Dunning (He will never be Bob to me). It is amazing to me that after 58 years or so this one teacher could have made such an impression on us all. He was a WWII veteran and member of the 101st Airborne Division. He made the jump into Normandy and fought in the Battle of the Bulge. I started doing research on Mr. Dunning in early 2014. I found quite a few sites on the jump in 1994 as well as some mentions in various books. He was an active veteran and spoke to many classes and groups about his wartime experiences. Many people do not know that he jumped again in Normandy on D-Day plus 50 years in 1994.

He was 73 years old. If there was ever a poster boy for the Greatest Generation, it was Robert C. Dunning. But there seems to have been millions of these young guys who also fit that bill. I wonder if there are that many from my "ME" generation.

When I came across Marty's (an old classmate from school) story which was forwarded to me from a mutual friend, I choked back a tear or too. If I had maintained contact with my old classmates, I would have been one of the ones who went back to visit my old 7th Grade Teacher & Hero. During my entire adult life, I would have flashes of memories of Mr. Dunning and his strict no nonsense way of handling us rambunctious kids. As Marty says in the article below, he would take every opportunity to counsel us about life. Some of us at the time took it to be war stories told to enhance his importance, but later came to realize that his passion was to teach us things that could not be found in books.

During some of my worst moments during my tour of Vietnam, Mr. Dunning memory always popped into my head and somehow helped me to endure.

Here is the Email from Marty, used with permission:

OK, on a more serious note, you asked about Bob Dunning. I refer to him as Bob because he requested us to call him Bob. I will try to give you a condensed version for now. About 15 years ago, several of my closest friends, decided to find Mr. Dunning. After all, he had been a childhood hero of ours, even though we were all pretty scared of him when we were in grade school.

As a seventh grade teacher every year he would find an opportunity to get all the seventh grade boys together and tell us his war stories. These stories never changed. They were the exact same as told to our older brothers in previous years. He didn't have to exaggerate. This story telling session usually took place immediately after some of us got in trouble. We were afraid that we were going to get the "Peace Maker" (very large wooden paddle), but what we got was a couple of hours hearing about boys becoming men and all the sacrifices they made.

From what I understand, Bob was raised on a farm outside Kalamazoo, Michigan. He met his future wife, Myra, while stationed at Fort MacPherson; He did much of his training at Toccoa, Ga. He was in the 101st Airborne, Command Company. The series "Band of Brothers" was about guys in the 101st Airborne, Easy Company. There were three Companies in the 101st. . . . There are monuments to all three Companies up in Toccoa, but I can't remember the name of the third one. The Toccoa train station has been turned into a museum honoring the 101st. It's certainly worth visiting. 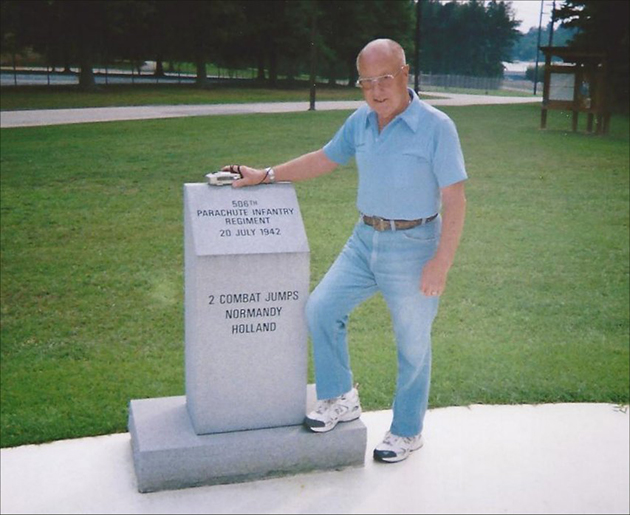 In the early morning darkness of June 6, 1944, Bob and many others of America's finest took off in C47 transports with special D-Day black strips on their wings indicating the invasion, termed project "Overlord". The plan was to drop men behind German lines to disrupt enemy reinforcements among other things. The Germans had purposely flooded the low lands fearing an invasion, although they didn't know exactly when or where. His plane was hit by enemy fire and they had to jump earlier than planned. Bob said that several of the guys were assigned to carry mortar shells, which added considerable weight to a rather short guy. Needless to say, he landed in water over his head and that made for a great story on its own.

Bob went on the jump again in Holland. Another historic event He told us he ended the war outside Berlin. These guys were all concerned that they would be reassigned to the Pacific theater rather than going home. Thankfully, that war front ended, too. He had many stories, which were told to us as kids. When we became adults, he relayed stories that wouldn't have been appropriate for a young audience. Although many were intense, a few were down right hilarious.

We went to see Bob and Myra Dunning several times prior to his death. I have a 8x10 picture down in my "Man Cave" of the five of us guys bent over with Bob Dunning standing behind us in the famous "Ready Position" and...........you guessed it, he's got the Peace Maker in his hands. Yep, he kept it all those years. On one of our trips up to his house in Hartwell, Ga. from out of the blue, he asked us to leave our correct contact information because he wanted us to be Pall Bearers at his funeral. Kind of a surprise considering he could have a full military service. We really thought he was kidding. However, several years and visits later we got the call that this American Hero had died. And sure enough four of us served as Pall Bearers, an honor none of us will ever forget. He treasured the many young people he taught and their parents, as well. That was his life, teaching young people to become good citizens. 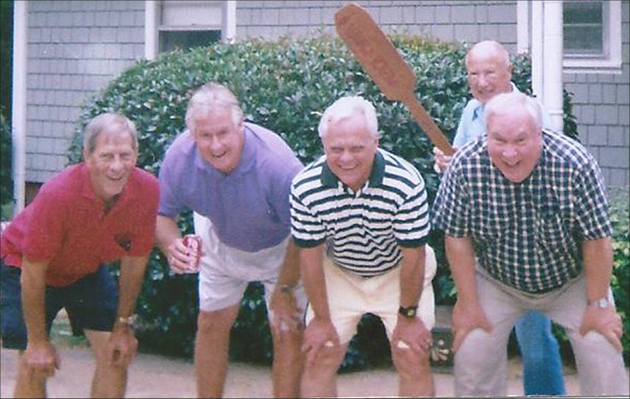 At Mr. Dunning's house in Hartwell, Georgia, 2003 (from left to right: Bucky, Joel, Bill, Marty, Mr. Dunning with the peachmaker): Above.

We could write a book about Pfc. Robert C. Dunning and the experiences he relayed, before, during and after the war. One thing is for certain he was the real MAN that John Wayne portrayed. He was a true American Hero, both as a soldier and as an educator. And we loved him and the influence he had on our lives.

As I said, we could write a book about him. If anyone finds errors in the above, please speak up. But, in closing I have to say visiting with Bob and Myra Dunning in later life was a hoot! I thank God that we had the opportunities to do so.

While he always made us walk the line, we all respected him and he taught us some great values to live by!! Thanks Marty Price!!

Here is link to this amazing man's obituary.

I contacted Marty and asked if I could publish his email. Marty responded with the following. "Good to hear from you. Yes, of course you can use what I wrote about Bob Dunning. Unfortunately, Myra Dunning passed away just a short time ago. There was a short obituary in the Atlanta paper. Myra told us that at around age eighty Bob was experiencing some heart issues. His doctor told them that he would be OK if he would just quiet jumping out of airplanes.

Seeing that Bob Dunning received the Good Conduct Metal brings a smile to my face after hearing of some of his "adventures" while stationed in England preparing for Operation Overlord. Very funny, indeed. He was young, full of piss and vinegar and obviously high-spirited. I can only imagine what he would have done to us if we had done some of the stuff he did. Yes, we had a lot of laughs listening to Bob tell his "other" wartime stories to us adult students."

Publisher's note: Join Bobby Tony and others so inspired to discuss the "Teachers We Remember", a new, ongoing, and fully participatory series here on BCN.
Go Back