Ozzy's last ride - A Vietnam forty-nine year retrospective - April 4, 1968 - 2017 | Eastern North Carolina Now | Most people will remember April 4, 1968 as the day that Martin Luther King was assassinated. While that was a more histrionically important event, that date will always seired in my mind as the date of a battle we fought in Vietnam. I was only in country for a couple of months and the loss of comr

Login to Send a Private Message to Tony Adams
Most people will remember April 4, 1968 as the day that Martin Luther King was assassinated. While that was a more historically important event, that date will always seared in my mind as the date of a battle we fought in Vietnam. I was only in country for a couple of months and the loss of comrades from my immediate platoon will always be first in my memory of April 4. I have debated with myself about posting this, but in the final analysis, I felt it appropriate to leave a public record here on BCN. You can right click and open the pictures in a new window to see a larger version.   - Tony Adams

I woke up this morning to find an Email in my inbox from an old combat brother. It tipped the scale about whether I should post my story on BCN. Here is an extract of the Email: 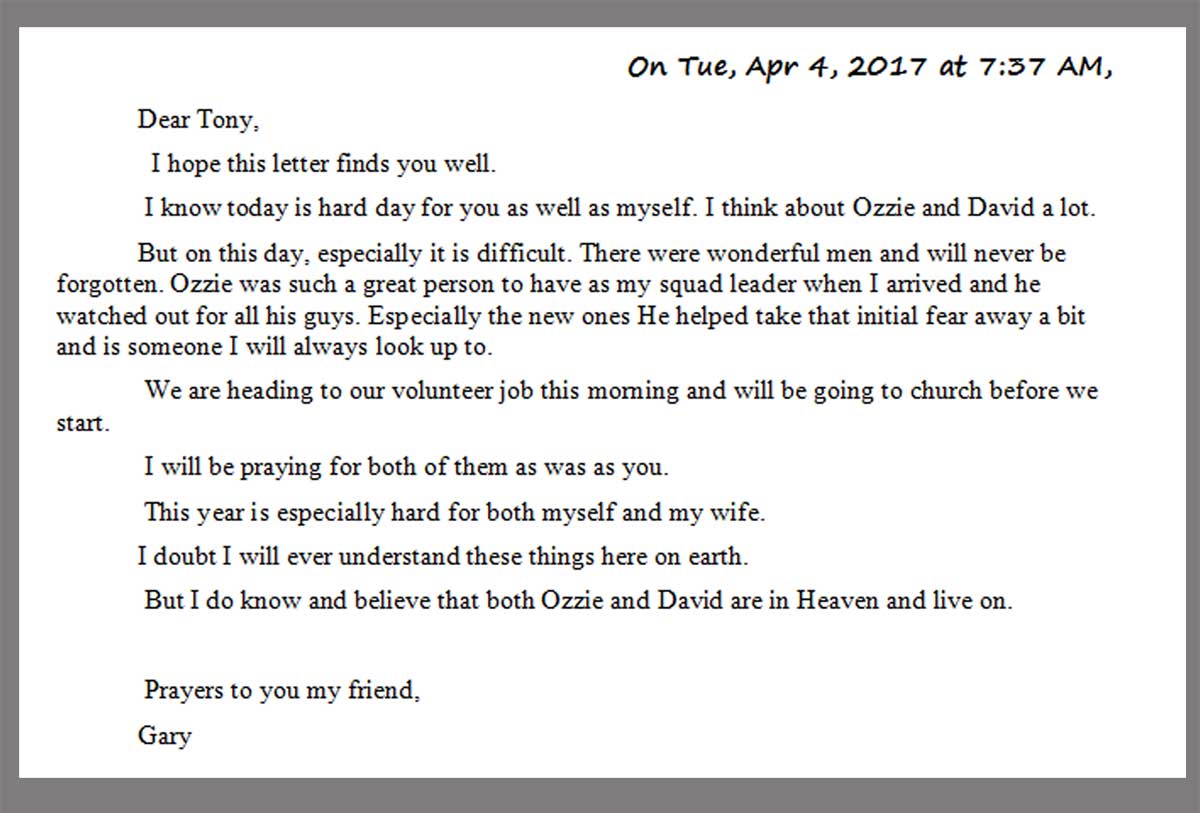 
This is an excerpt from my Vietnam Battle Dairy. It covers the battle of Ap Bao Go. It is part of a longer 36-page narrative that I compiled from ten (10) participants in the battle in 2009. It is interesting to me that I never knew any of the guys who contributed to the personal narrative of that battle. That is not unusual as the units often worked as either Company sized units or sometimes only Platoon sized. You did not go out of you way to befriend too many people due to the potential of them getting killed. I made contact with them through our Unit Website, and asked each to give me their memories of the battle. Apparently, many of them were haunted by that day, as was I. Perhaps one day, I will publish the narrative on the Unit Website for historical reference. The narrative was compiled by email and then combined by me into one document. Each remembrance was offered without knowledge of the contents of the other submissions beforehand.

That compilation is far too long to include here, but suffice it to say, it was not a good day for the 2nd 12th Infantry or the 199th Infantry. The Army Daily Staff Journal summarizes the action in less than one paragraph.The complete Staff Journal is 11 pages long with details on location and hour to hour contacts. That is not a criticism of the Daily Staff Journal. The journal is a contemporaneous account from the officer of the day from Radio intercepts of S2, S3. It is a narrative that is devoid of the emotion of the battle and is a historical record of the details and statistics that the Army created for almost every unit action in Vietnam. All pictures except the last two are courtesy of A. Krause, Charlie Company 2nd 12th Infantry, 25th Infantry Division. It should be noted that the Shultz noted in the pictures was David Schultz. Eddy Schultz died a month earlier from the same unit. It was the subject of another post. Here is the link to that post.

See below for the last page summary: 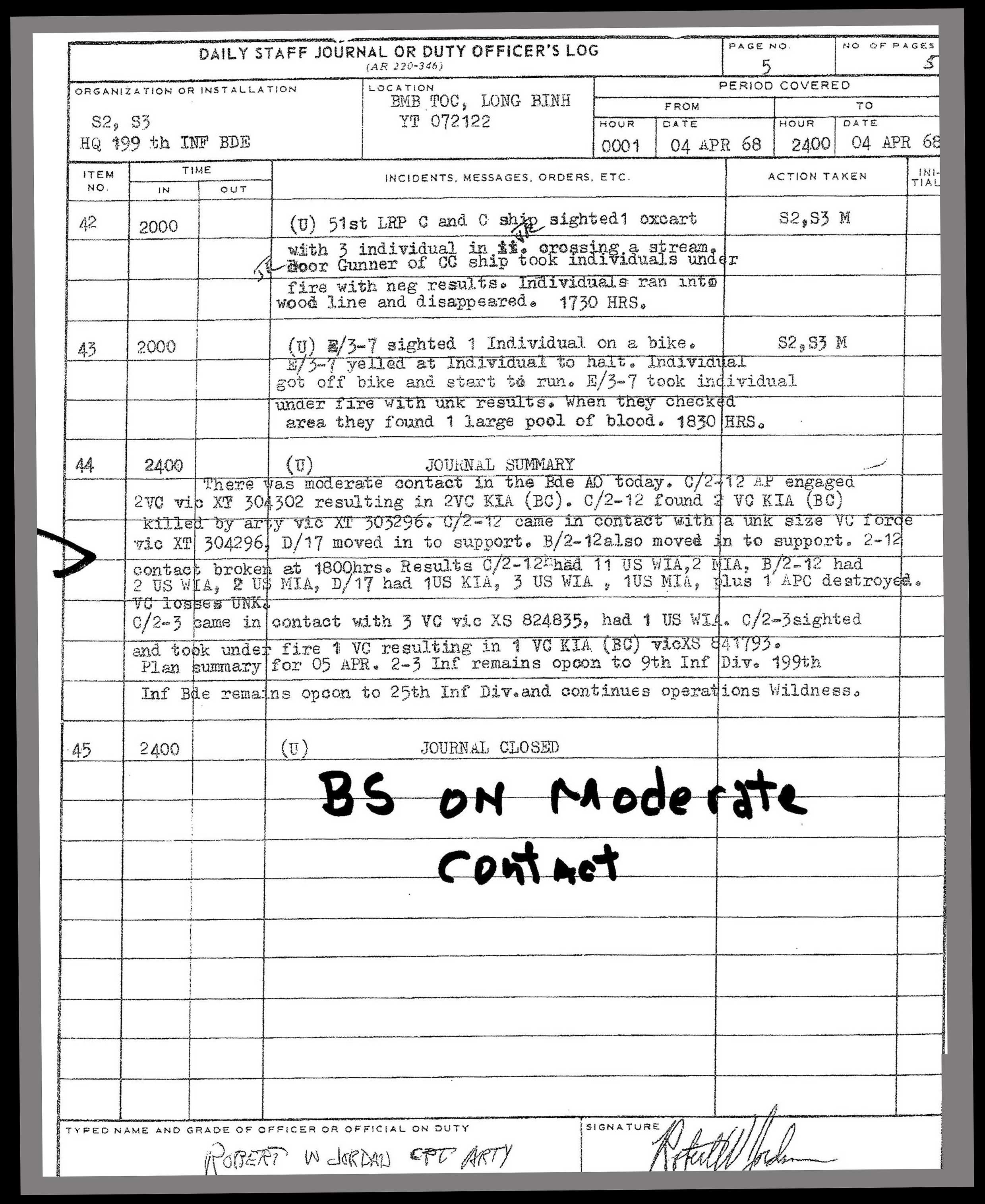 Below is the map of the AO with notations of various battles during that time frame. 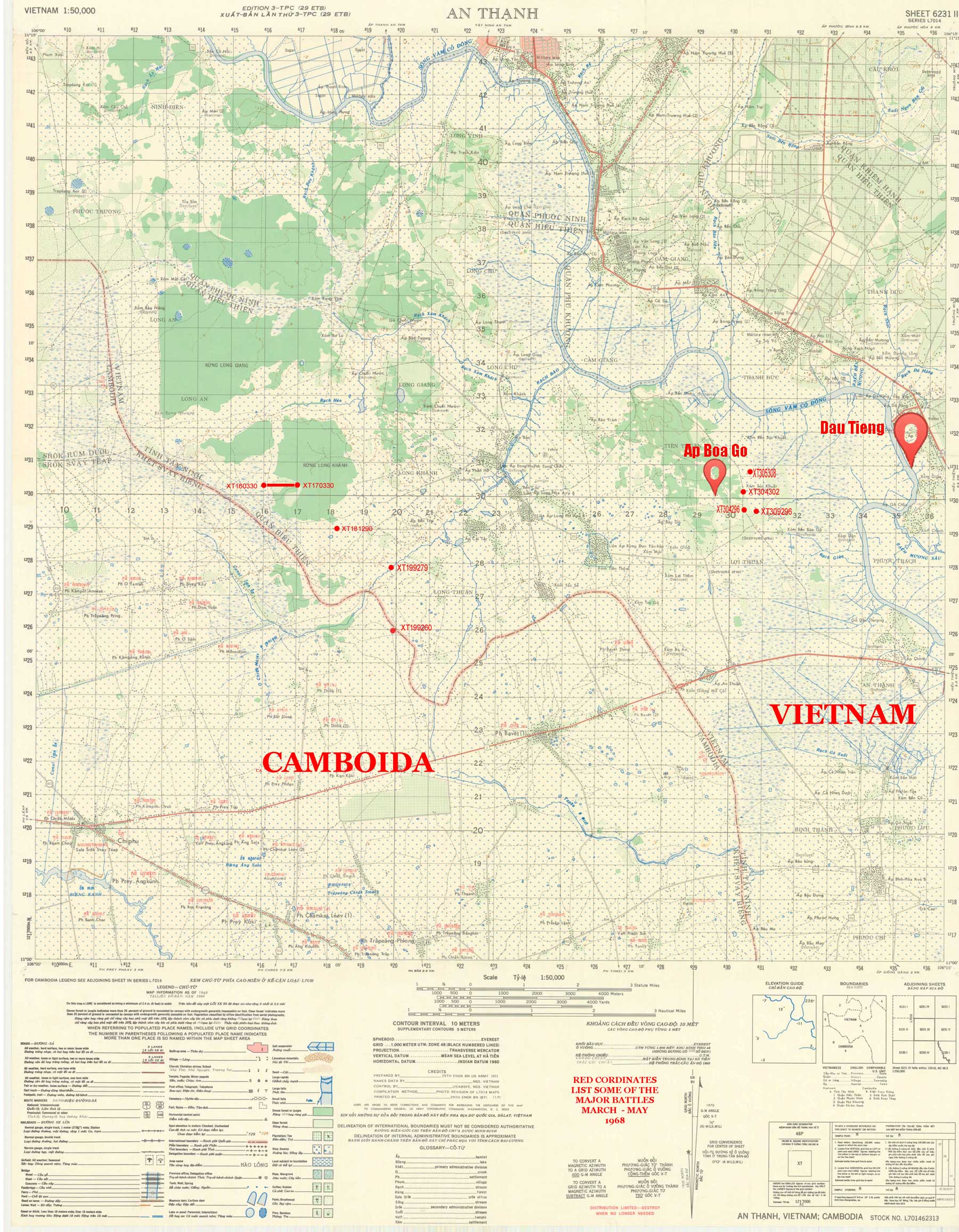 
Below is a Google Earth shot of the same area: 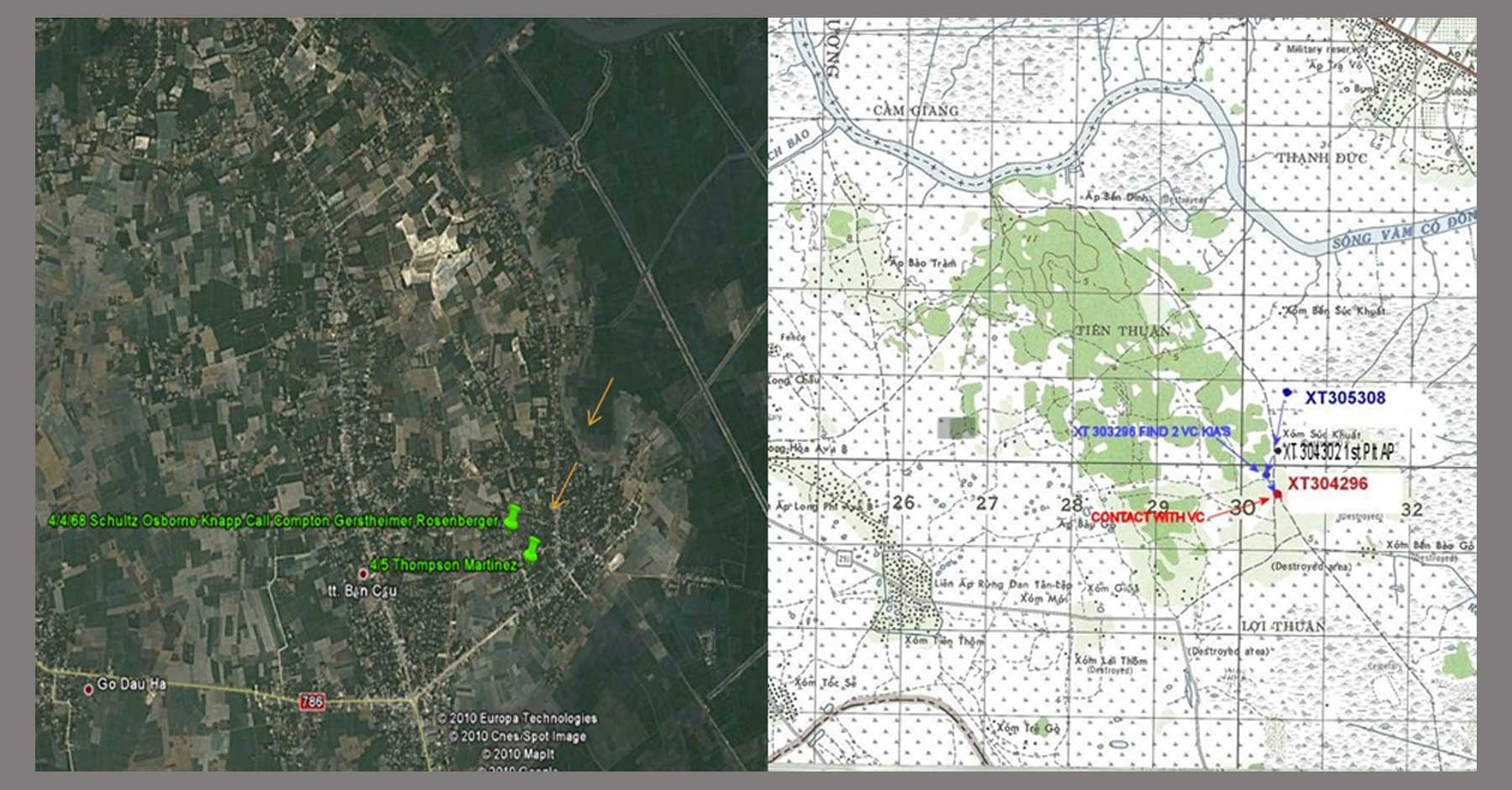 
In 2010, The Web Master made a return trip to Vietnam and visited the site of this battle along with two others from our unit. Here are a few pictures from his trip. 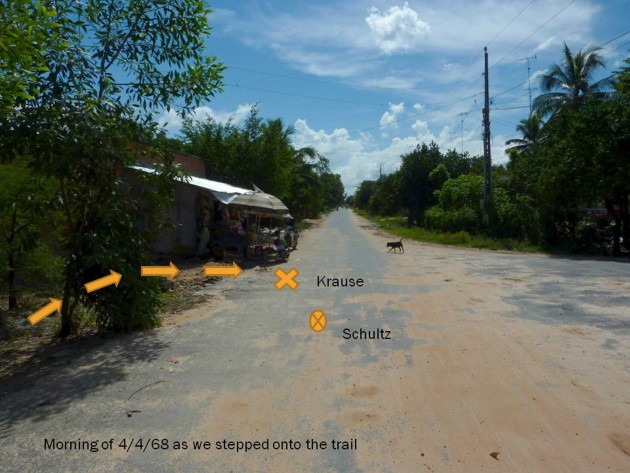 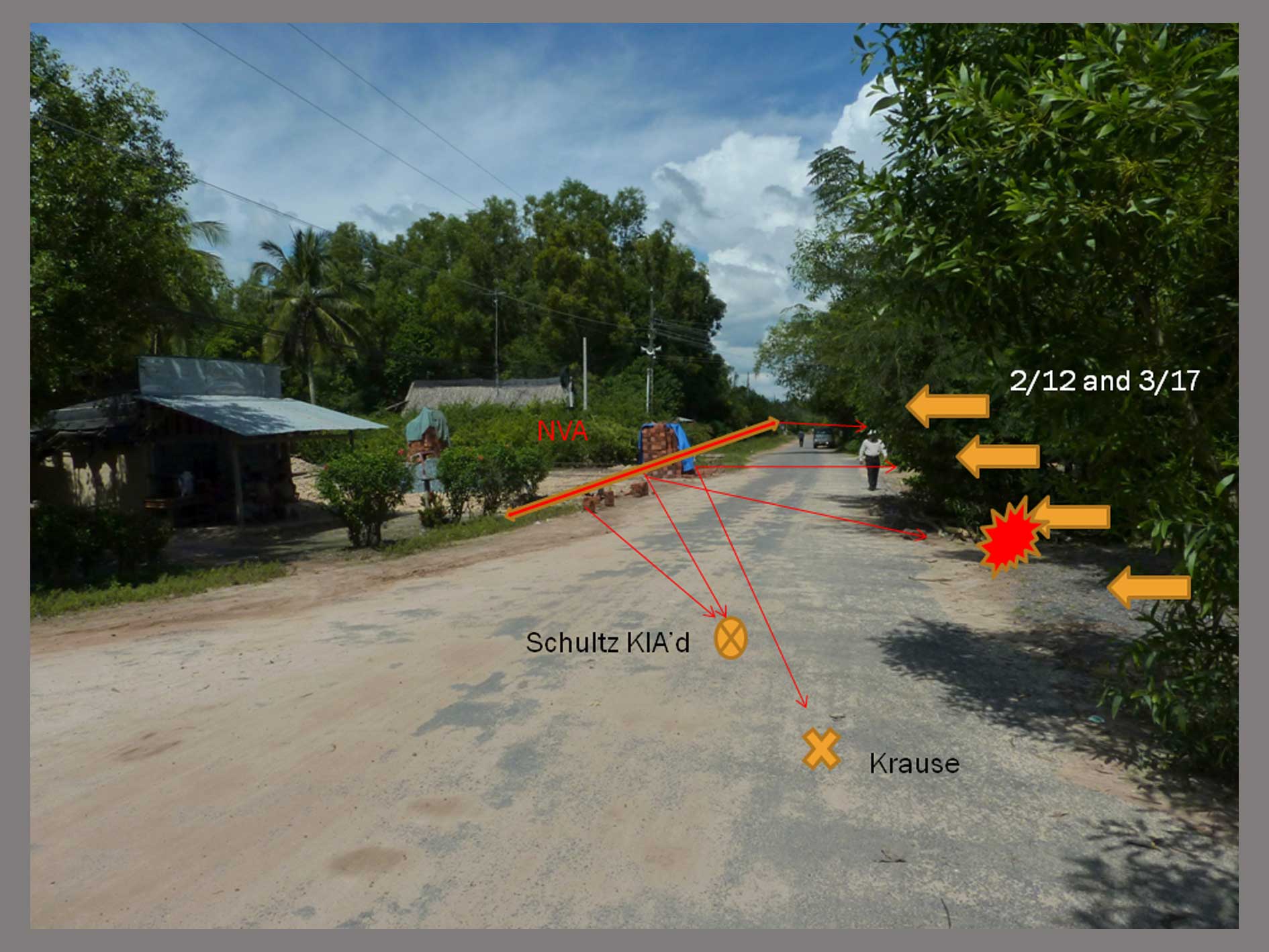