It was hailed as the Bomb Cyclone, a storm consisting of warmer moist air from the Gulf of Mexico that picked up a spinning motion after its center crossed the northern Florida coast, now over the Gulf Stream, and without delay barrelled north up the Atlantic Seaboard casting cold, and consternation throughout the South, the Middle Atlantic and the Northeast states. School children, however, had multiple snow days to build memories of frozen wonder; memories that will not be soon replaced by the next greater storm; memories that will hopefully assuage their warm weather despair when their Summer vacation will surely be cut short - the dreaded make-up days will be duly enforced. 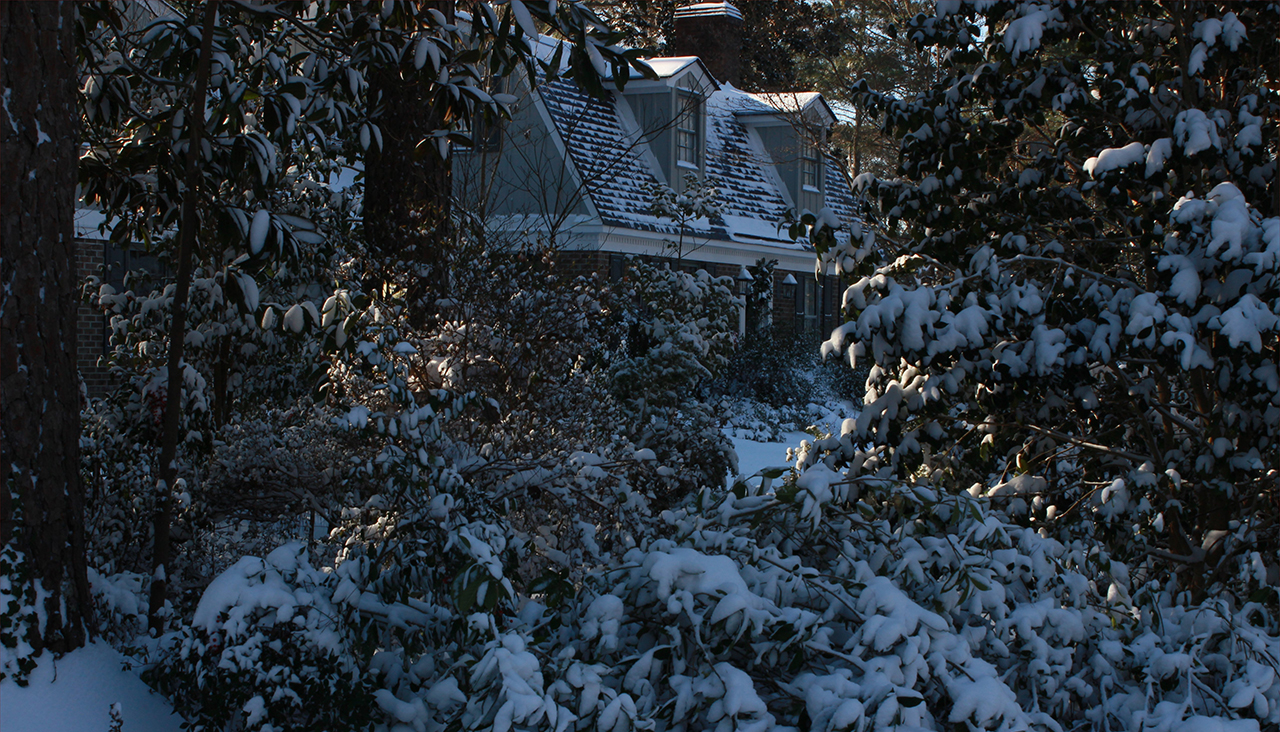 After a night of about 3/4" of ice and pellets, and about 7" of fine dry snow, I awoke to a morning of 26 degrees fahrenheit, a stiff breeze, and a dry air of winter, with full sun that was in no hurry to seek temperatures above freezing. The place where I predominately lay down my head: Above. The front yard pond that is a constant wonderment to me year round: Below.    photos by Stan Deatherage    Click images to expand. 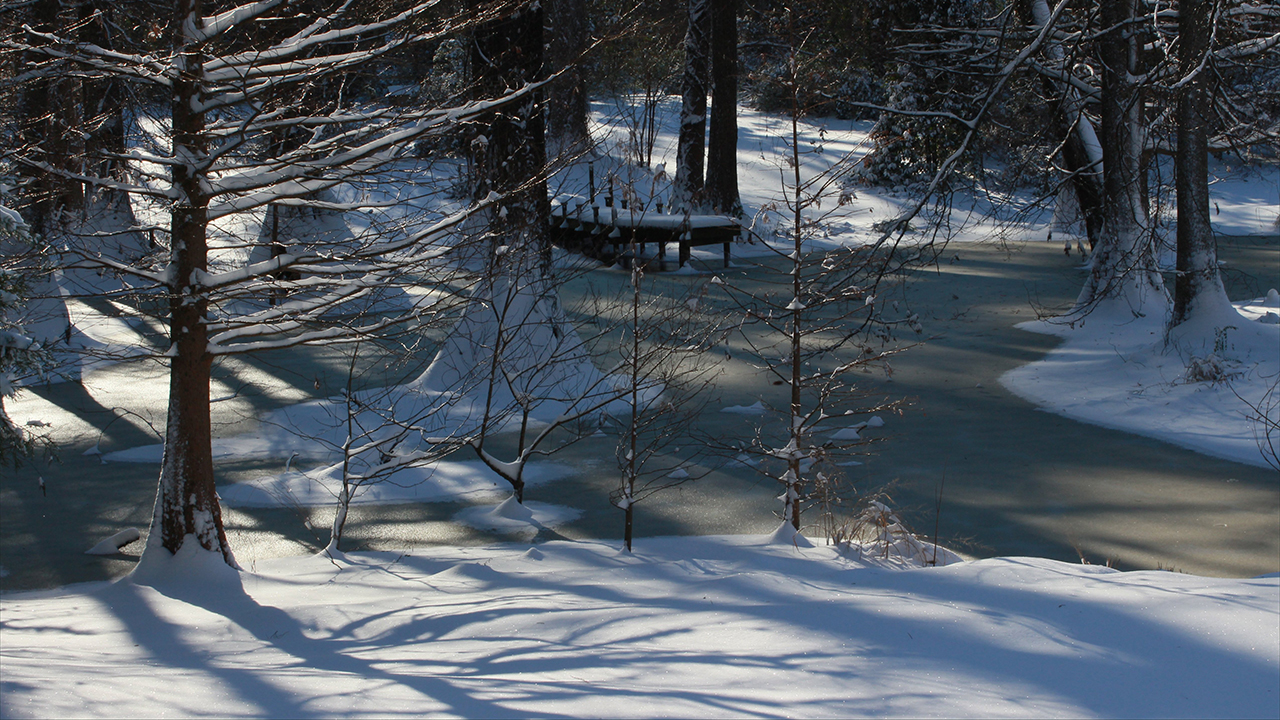 The storm began the night of January 3rd, 2018, with temperatures around 34 degrees fahrenheit, and continued with great gusts of wind throughout the night and ended around dawn with the temperatures around 26 degrees. Throughout that succeeding sunny day, there was little melting since the ground was sufficiently hardened by a few inches of permafrost, and air temperatures that struggled upward to find the freezing mark. Interestingly, one could argue that the initial effects of the storm began toward the end of Christmas Day, when the first of three arctic blasts pierced the warm Southern veil of our normally mild Winter Climate. 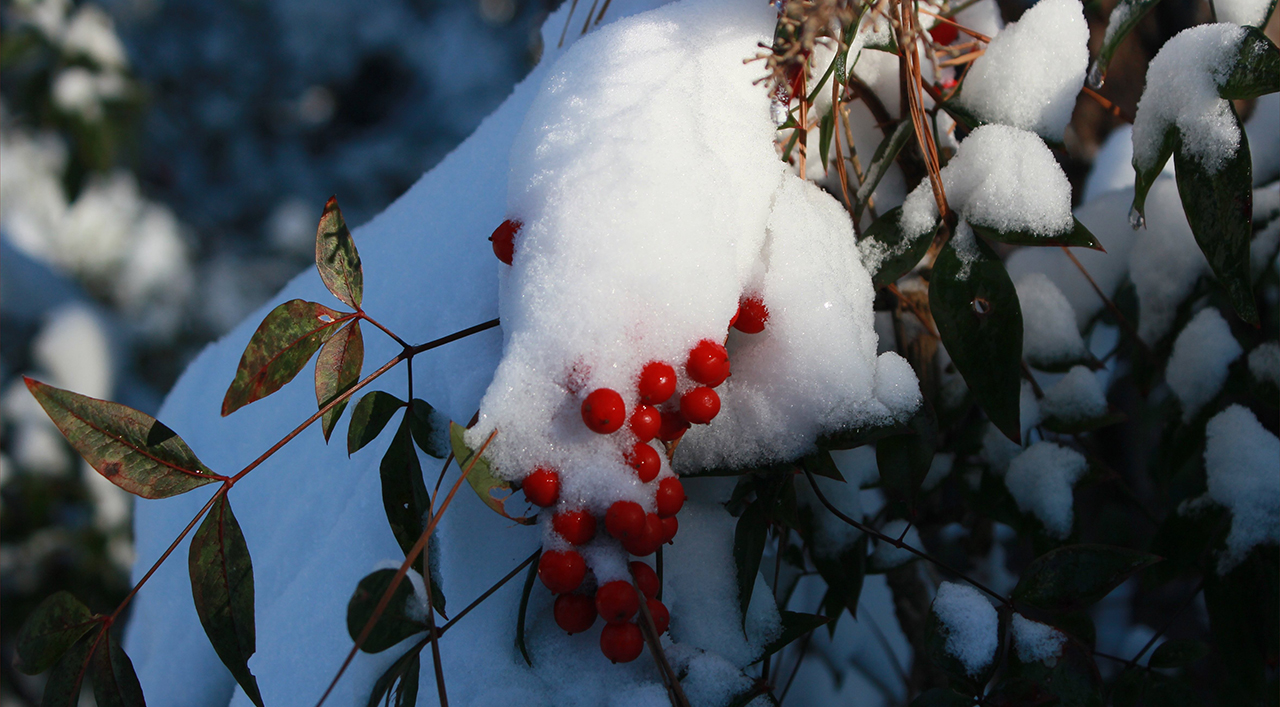 Nandina stay quite beautiful year round, and that might be why I grow so many: Above. From the snow covered on the street in front of my abode: Below.    photos by Stan Deatherage    Click images to expand. 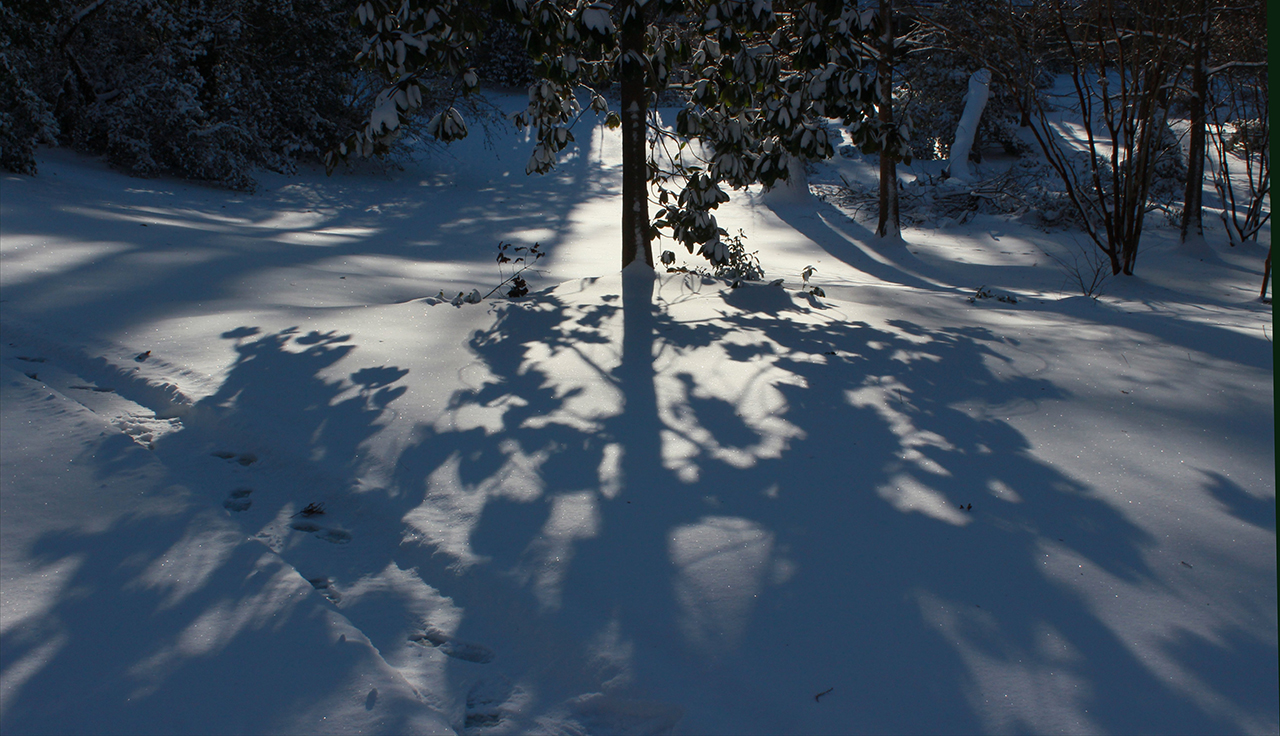 I took the time to take a few images to chronicle the event, but one who has much to do can only tarry a slight bit with the handy DSLR; capturing the moments after this big storm and the massive front of the third blast of arctic air yet to fully set in that night. 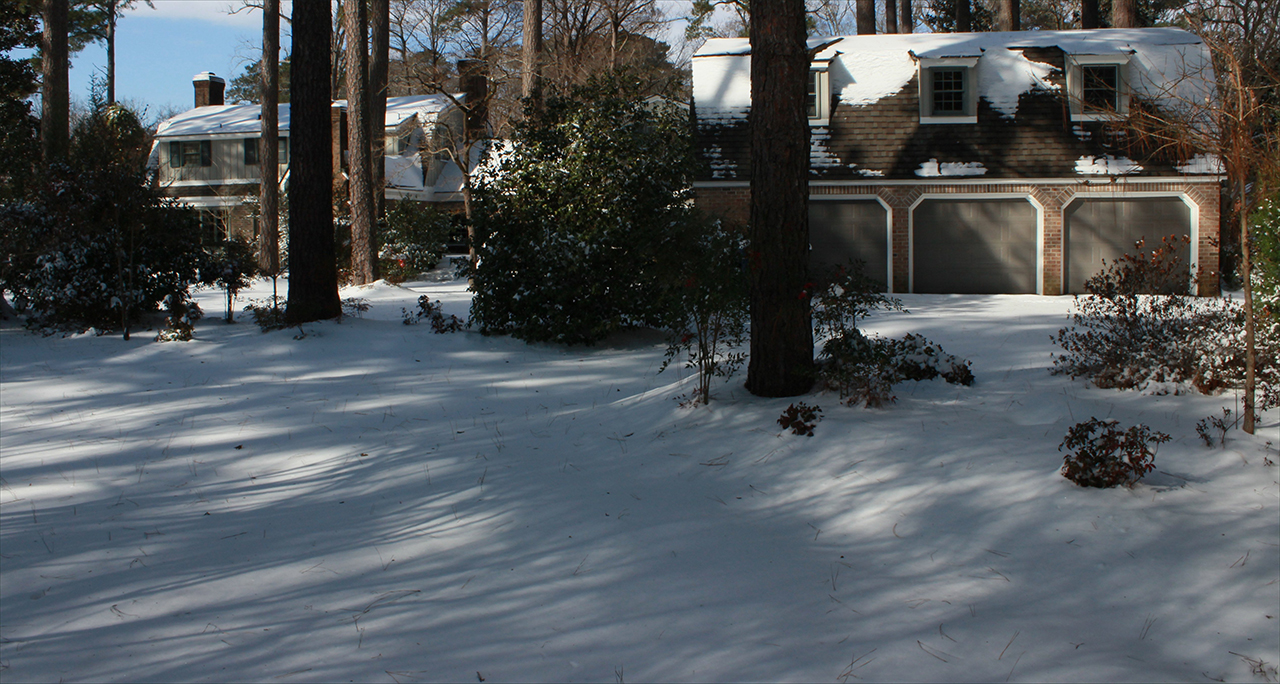 This image taken after noon suggests the depth and the unusual resilience of this snow from melting; this is eastern North Carolina. Also you are not only looking at my long time home, but the headquarters for Symbiotic Networks and BCN: Above. Just a few doors away, down a thick snow crusted street, is the home of Granddaughter Mira Grace, who tends to gleem a similar sense of wonder as her grandfather: Below.    photos by Stan Deatherage    Click images to expand. 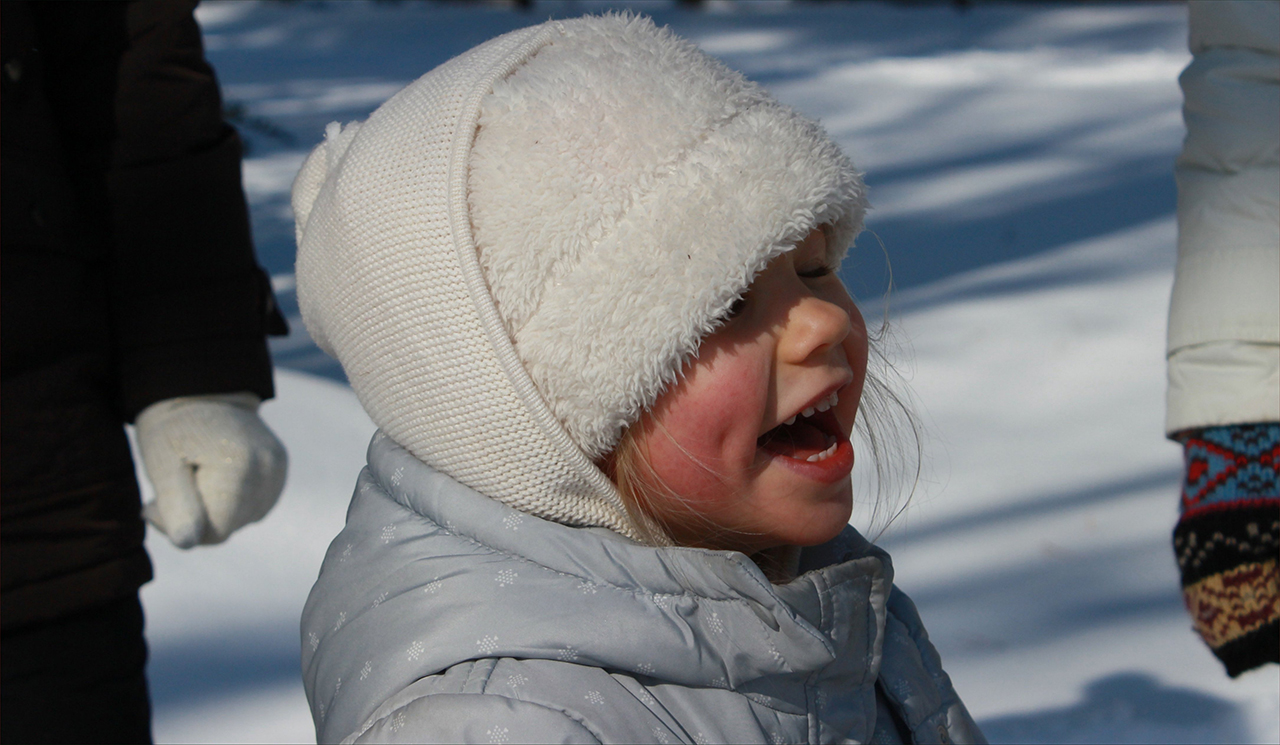 During that sunny day, the temperatures struggled to reach 30 degrees, but that afternoon, the wind out of the north began to blow harder, and by nightfall that sunny struggle of the rising temps was replaced by mid to lower twenties, with 8 degrees fahrenheit predicted that night. By the morning of the 5th of January, it was closer to 4 degrees. 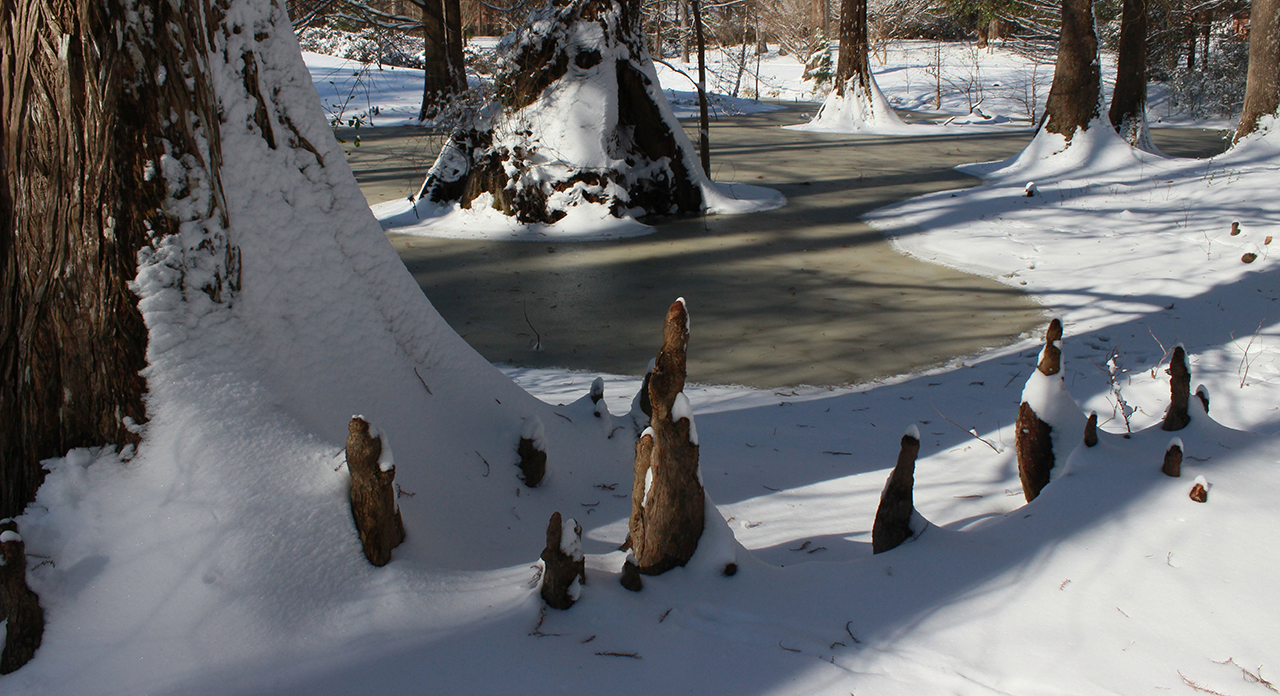 The unspoiled morning snow gathered around my frozen Cypress Pond, which would prove to be a focal point for many frosty images over the succeeding days: Above and below.    photos by Stan Deatherage    Click images to expand. 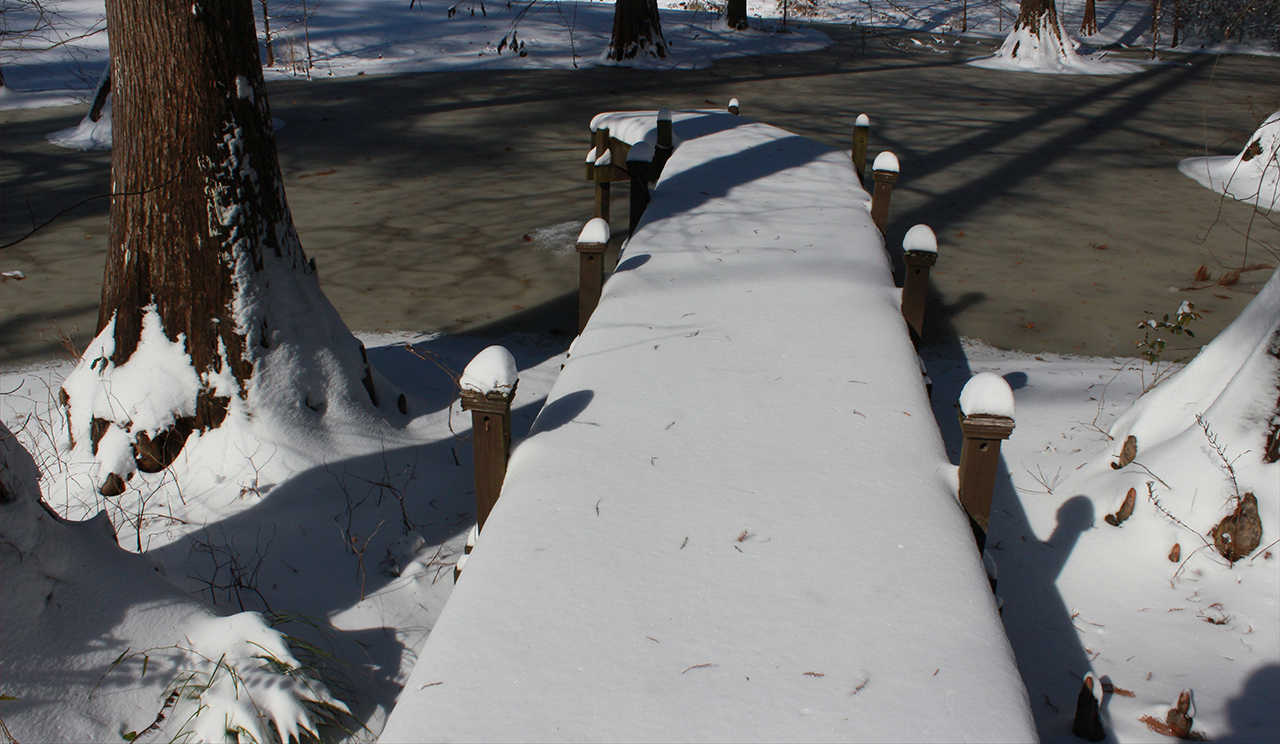 It was a good first day after the first big snow storm here in northeastern North Carolina for some years. I took pictures, worked at my perpetual job of endeavoring to just catch up, and made plans to stay active, stay warm, and, if possible, get as many great shots of this terrible, yet beautiful weather event as was within my power to find the time to do so. 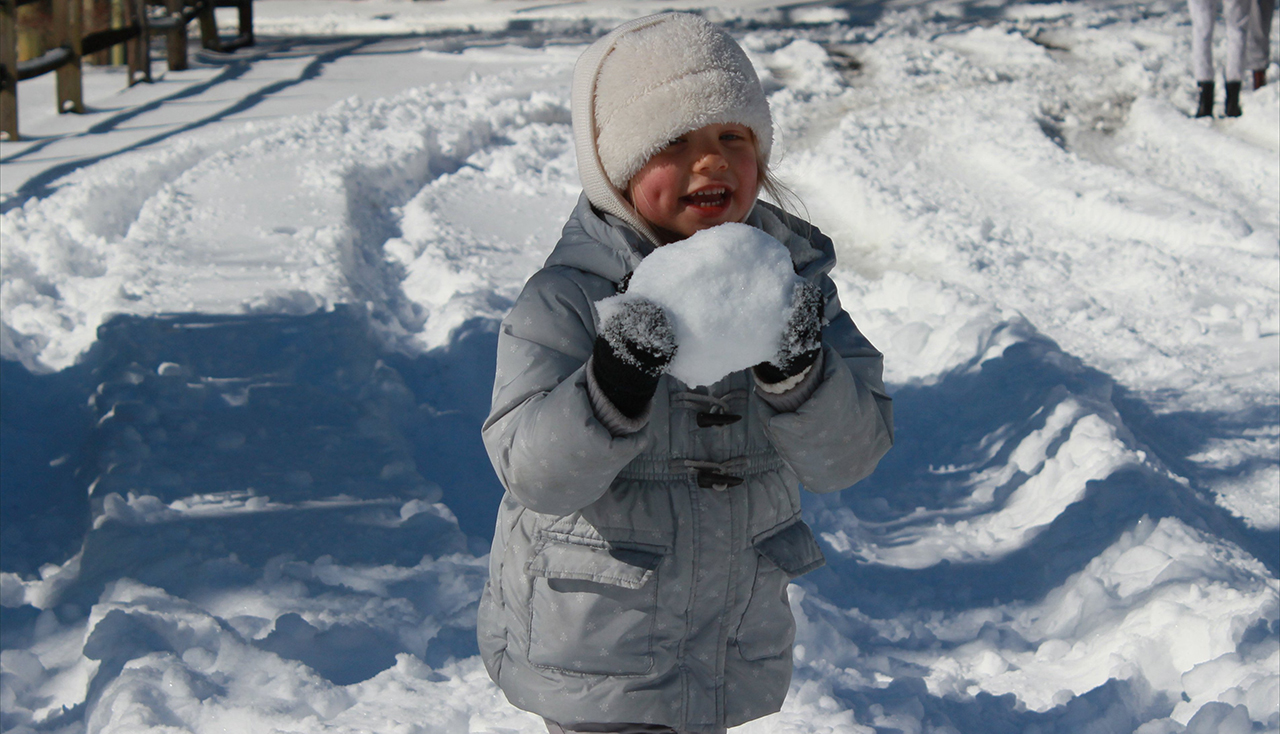 Plenty of snow for Mira Grace: Above. Very little melt here at sunset in my upper yard: Below.    photos by Stan Deatherage    Click images to expand. 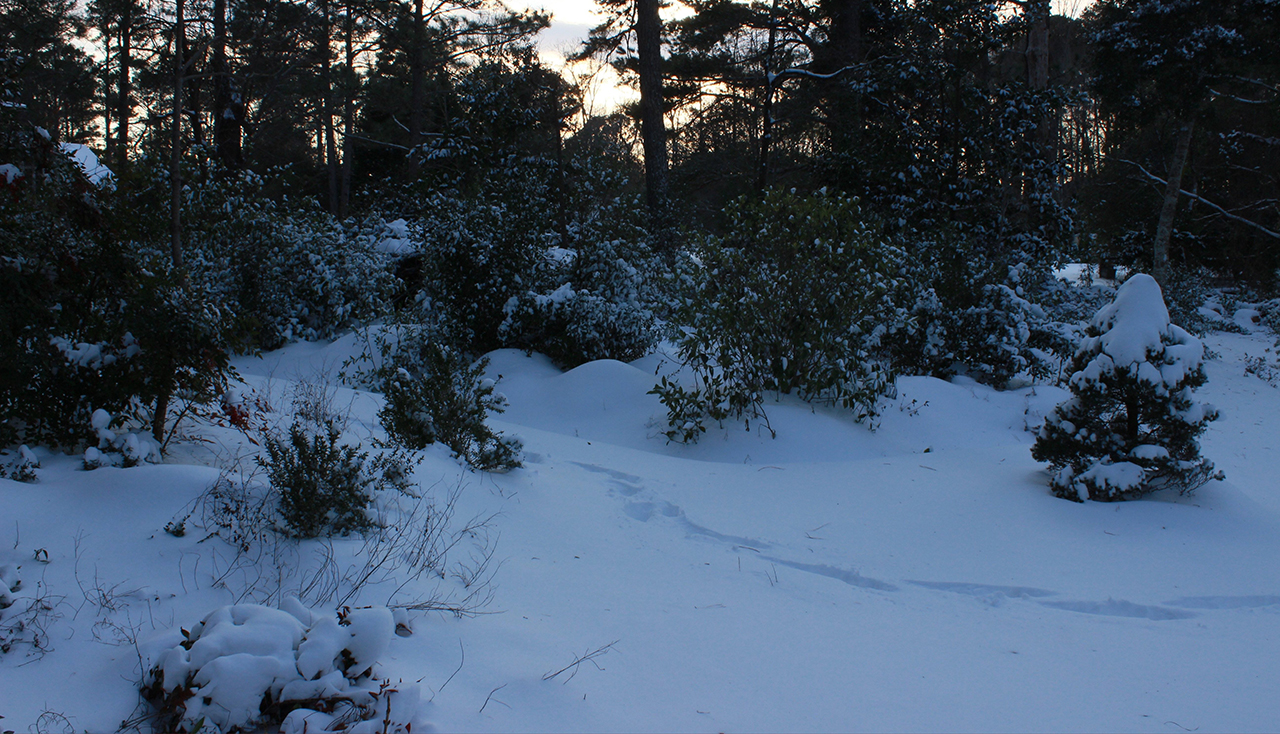