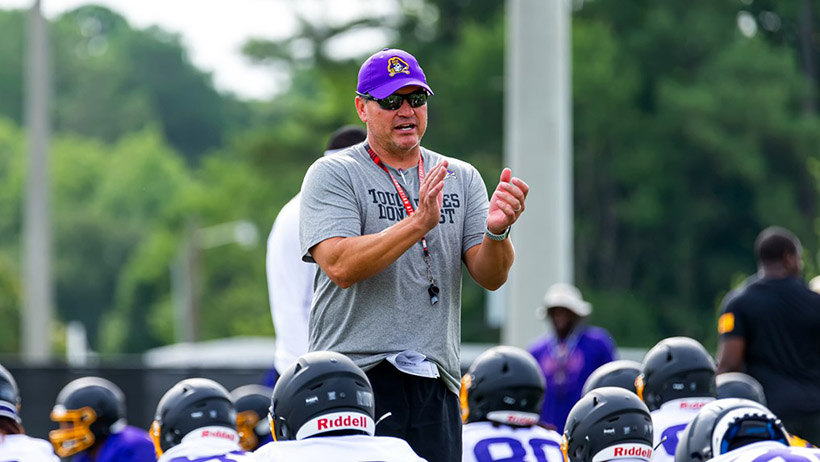 GREENVILLE, N.C.     East Carolina is starting to find a rhythm as it completed its fourth day of pre-season camp Tuesday morning.

Every day is supposed to build on the previous one. Mistakes yesterday turn into success today. No time for backsliding. Push, push, push then push some more to be ready for the August 31st opener against the NC State Wolfpack in Raleigh.

"I think it was our best practice of pre-season camp," Houston said. "It was our second day in shoulder pads and I thought we had incredible effort with guys really flying around. There was positive enthusiasm with guys really trying to encourage each other. The effort and trying to do what they were coached to do was definitely there today.

"We did a kickoff coverage drill at the end of practice," Houston continued. "It's hot, the kids have been working for two hours and everybody is involved - and it's a hard drill to run. However, everybody is still pushing themselves and trying to do things correctly. I really liked our positive attitude today. There wasn't a lot of grumbling and everybody worked hard. It's great to see that."

The daily structure of camp stayed basically the same with additions thrown in to prepare for the rapidly approaching season.

"We put in a couple more pressures and added two new defensive coverages today," Houston said. "We added a couple of new run plays and some pass plays on offense. The offense will continue to evolve, but we'll be pretty close to full install on offense by the end of this week. It will be next week before we are there on defense."

Veteran coordinator Bob Trott has directed defenses on the college and professional level for close to 40 years and put the safeties through a variety of drills designed to not only stop the opposition, but force turnovers as well.

"Don't jam him then let him go, run with him" Trott exhorted during one drill, as sophomores Nolan Johnson, Daniel Charles and Xavier Smith, along with freshmen Jared Rainey and Jireh Wilson tried to comply. "One hand on him is better than two because he can't knock it off. That's better, nice footwork, good hit."

Trott came to ECU, his 11th stop in college football along with three stints in the NFL, from James Madison when Houston was hired in December. He helped the Dukes advance to their second-straight FCS National Championship Game in 2017 by leading a defense that ranked first in the nation in scoring defense (11.1) interceptions (31) and total takeaways (44). He was named the FCS Coordinator-of-the-Year by FootballScoop.com after that season. The Kannapolis, N.C. native and former UNC safety coached under Bill Parcells at Air Force, Ken Hatfield at Arkansas and Clemson, Fred Goldsmith at Duke and Al Groh at Virginia and learned early what works.

"We are going to be a tough, smart, hard-nosed physical football team," Trott said. "One of the worst things you can say in football today is that a team is soft. That won't be us. We always talk about things that cause you to win and interceptions is one of them. However, it's a team thing.

"We always point out that the pass rush caused it or the coverage caused a sack. Everything is built on the team concept and the kids realize how important everyone is in making it happen. It's not just the person who makes the play. That's our culture."

Most fans think the defense has done its job when it forces the offense to punt. Trott agrees but coaches his players to take it another step.

"We want to give the ball to our offense in the best field position possible," Trott said. "It's not real hard. The further back they are, the longer they have to go. The closer we are, the more we score. I learned that from Coach (Bill) Dooley at Carolina, then from my first coach, Bill Parcells at Air Force. Both believed that blocking, tackling and running the ball were the keys to winning. A physical, active defense that gives the offense more chances to score is a big part of that."

This year's edition of Trott's defense is still very much a work in progress, but having senior lineman Kendall Futrell and junior linebacker Bruce Bivens healthy is a major step forward. Both missed spring practice because of injury.

"Kendall had a great practice yesterday and Bruce did some nice things today." Houston said. "He (Bivens) has great feet and a great motor. He had a lot of intensity today during our team portion of practice and has a chance to be a great leader for us."

The Pirates will put on full pads for the first time Wednesday, which marks another step in the pre-season progression.

"Tomorrow will be a big day for us," Houston said. "We'll have full pads and full contact, so it will be another chance to get better and learn more about our team."