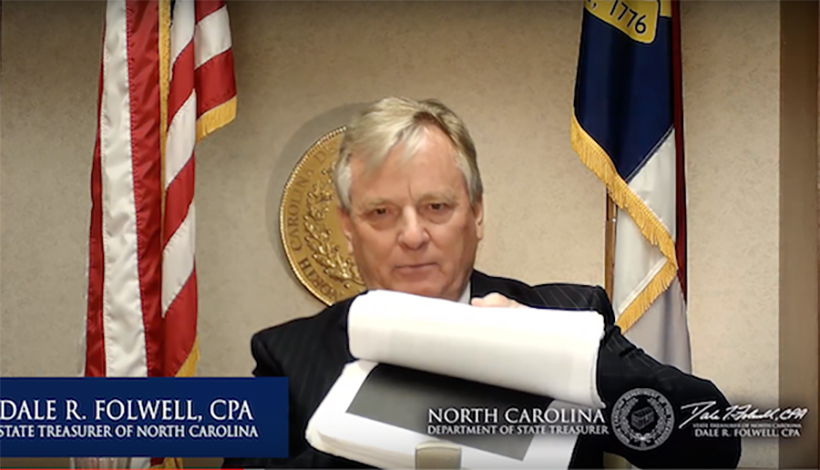 Hospitals have called the treasurer's bluff.

The deadline for hospital signups onto the State Health Plan expired Monday, yet the plan remains bereft of major hospital networks.

"We have no news to report. Generally speaking, nothing has changed regarding the boycott of the State Health Plan by the hospital systems," state Treasurer Dale Folwell said. "We did not hear from a great number of hospitals."

Without major reforms, the State Health Plan will go broke within the next four years. The state auditor reported the plan is at significant risk for overpaying medical claims - to the tune of a potential $48.6 million just from 2008-10. The same report says auditors can't access Blue Cross Blue Shield's contracts with providers, and so they can't tell whether providers are milking the system for taxpayer dollars.

The treasurer has put it more bluntly: Folwell once said the state "didn't have a clue ... what the hell we were spending this money on."

The Clear Pricing Project is Folwell's attempt to clean things up. By tying reimbursements to Medicare payments, he plans to eradicate the opacity he has long blasted as "secret contracts and high prices." He expects the reforms to save taxpayers roughly $166 million, and plan members another $34 million in reduced costs - if they succeed.

While hospitals are continuing the game of chicken, someone will have to crack before the year is up, or state employees will face out-of-network costs at almost every hospital in the state.

As the standoff continues, Folwell calls these hospitals a cartel, while they publicly declare his plan a "step backwards" - and privately, in the case of Cone Health's assistant director of finance, Frank Kauder, advise him to "burn in hell, you sons of b*****s" in personal emails.

UNC Health has refused to sign on, though representatives met with the treasurer Monday.

"With the shared goals of long-term sustainability and improved quality of care, we are confident we will be able to reach agreement in ample time to avoid any impact upon the provision of, or access to, care for state employees, retirees, and their dependents," UNC Health said in a statement.

The treasurer is less sanguine.

"We are beyond disappointed that the state hospital who employs the greatest number of state employees as an agency and health-care provider refuses to accept a reimbursement rate that produces an almost 100% profit," Folwell said. "We're back to where we've always been. This is a battle between people who want to keep contracts secret and prices high versus the Clear Pricing Project, to have no more secret contracts and to push the power down to the consumer."

Folwell said he is still waiting to hear from Blue Cross Blue Shield on the status of some hospitals and providers. Five hospitals and 27,000 providers have signed on so far, said Folwell.

Both Folwell and SEANC mock the committees' odds of real reform. The committee would be staffed by four medical-industry figures and three representatives of state employees, as well as eight legislators and the plan executive administrator. The bill cleared the House, but is sitting in the Senate rules committee.

"I have files and boxes full of studies over the last 15 years, and during that entire period of time, all that's happened is more secret contracts," Folwell said. "H.B. 184 is a piece of legislation that is meant to do one thing: maintain the status quo of secret contracts and high costs."

Folwell said he's not extending the deadline at this time.

"We have a responsibility to build this network. But individuals should be outraged that we have offered on their behalf nearly 100% profit on average to these institutions, and we continue to be boycotted," Folwell said. "They should be outraged at what's been happening to their health-care costs and their family premiums."

Without reform, state employees will see a 266% increase in premium costs by 2023, spiking the current $50 monthly premium to $133 per month, according to The Fiscal Research Division of the General Assembly.

"These hospitals are themselves the ones to blame for causing the level of uncertainty and anxiety that exists among state health plan members," State Employee Association of N.C. Executive Director Robert Broome said. "The state health plan has made concessions to address their concerns. They continue to let their greed and their hubris stand in the way of affordable healthcare for 720,000 state employees."

As Folwell and the hospitals remain deadlocked, they have fewer than five months to come to an agreement.

"We have a responsibility, a loyalty, and a duty of care to these members to make sure that they have accessible and affordable health-care, which they have not been privileged to for a very long time," Folwell said. "We have a medical arms race in North Carolina. No one consumes health-care; it consumes them."
Go Back