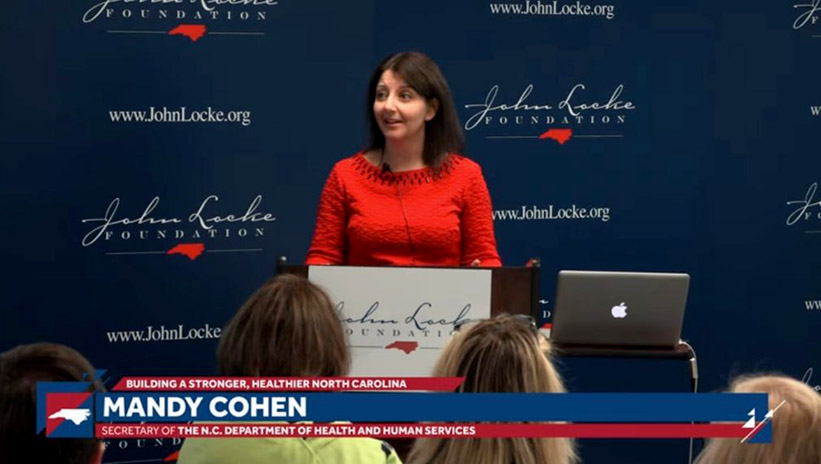 The overhaul of North Carolina's Medicaid's infrastructure is caught in the stand-off between Democratic Gov. Roy Cooper and the Republican legislature.

After its funding was locked in the budget stalemate and then sunk by Cooper's veto of a stand-alone bill, the Department of Health and Human Service delayed Medicaid transformation by four months, pushing the first wave of enrollment from November to February.

Medicaid transformation will farm out the management of N.C. Medicaid to private health insurers. In exchange for a per-person monthly rate, five managed care companies will oversee the health care of 2.1 million low-income mothers, children, seniors, and disabled people in North Carolina.

"The transition to managed care is the most significant change ever undertaken by N.C. Medicaid," N.C. Health and Human Services Secretary Mandy Cohen said Monday in a news release. "Since July, DHHS has advised its partners and the North Carolina General Assembly that the timing of the budget would impact the state's schedule for moving to managed care."

Under the current system, providers bill the government for the services they provide, and taxpayers cover the bills. After Medicaid transformation, providers will bill the managed care organizations. The MCOs can keep anything they don't spend covering patients' care. If per-patient allotments don't cover the cost of care, the MCOs will have to absorb any losses.

The delay won't affect most of the enrollees, who were already scheduled to switch in February instead of November, but it will stifle Cohen's plans to stage transformation in successive waves instead of in a wall of enrollment.

"This wasn't my first choice. I wanted to do this in phases," Cohen said. "We've learned from other states that doing this in phases eases the operational load on the state and managed care companies, but the extra time will allow us to spend it getting ready to launch statewide on Feb. 1."

Without funding, parts of the transition are stalled: The government can neither finalize the payment rates, nor recruit enough providers, nor assign plans or doctors to beneficiaries who fail to select a plan.

"Contracts have been signed with the [prepaid health plans], and they will be spending $2 [million] to $4 million per month if we are delayed," said Sen. Joyce Krawiec, R-Forsyth. "They have already had to hire people, equip office space, and get their infrastructure up and running. They're ready to go."

Blue Cross N.C. did not verify that number, but a spokesman said the company remains prepared for transformation.

"Blue Cross N.C. remains committed to providing our state's most traditionally underserved people with high-quality, managed care at a lower cost," BCBSNC spokesman Austin Vevurka said. "Our implementation procedures are on schedule, and we will be ready to serve North Carolina's Medicaid population on day one."

DHHS also scolded the General Assembly and the governor for complicating the transition.

"Ongoing budget uncertainty has been an impediment to health plans finalizing contracts with doctors and health providers," DHHS said. "An essential component of a well-running managed-care system is the strength of the health care network available to beneficiaries."

That uncertainty will remain unless the legislature decides to compromise or until it musters up the votes for a veto override on House Bill 555 - the bill Cooper vetoed Friday, Aug. 30 - or on the budget itself.

"The veto affects things in a tremendous way. I don't see a scenario where we can move forward with managed care without the funding that is in H.B. 555," said Rep. Josh Dobson, R-McDowell. "I can't speak for the House or the speaker, but I don't believe a veto override is possible on this bill. The Democrats seem to be united on this one. We need 72 votes for an override, and we don't have that, which is unfortunate."

Cooper's veto was his latest move in the budget stand-off over Medicaid expansion.

"Passing mini-funding bills that simply divvy up the vetoed Republican budget is a tactic to avoid a comprehensive budget that provides for health care and other important needs like education," Cooper said in a news release. "Health care is an area where North Carolina needs us to do more, and to do it comprehensively."

Republicans blasted Cooper for the veto, accusing him of deadlocking transformation because he insisted on putting Medicaid expansion in the budget.

"Medicaid transformation was a bipartisan effort to control the growth and costs of Medicaid and focus on improving the health of recipients," Sen. Ralph Hise, R-Mitchell, said in a statement. "The governor's veto puts us back on an unsustainable path that is bad for doctors and bad for patients. With this decision it appears he has slammed the door shut on improvements or modifications to the Medicaid system."

DHHS said it will continue to roll out the pieces of transformation that don't rely on the budget.

"In the meantime, we're going to keep moving forward with the parts that we can, that don't require a budget," Cohen said. "It's not like we're putting on the brakes entirely. ...We'll keep marching forward and using this time well so that we will be ready to do a statewide implementation in February."