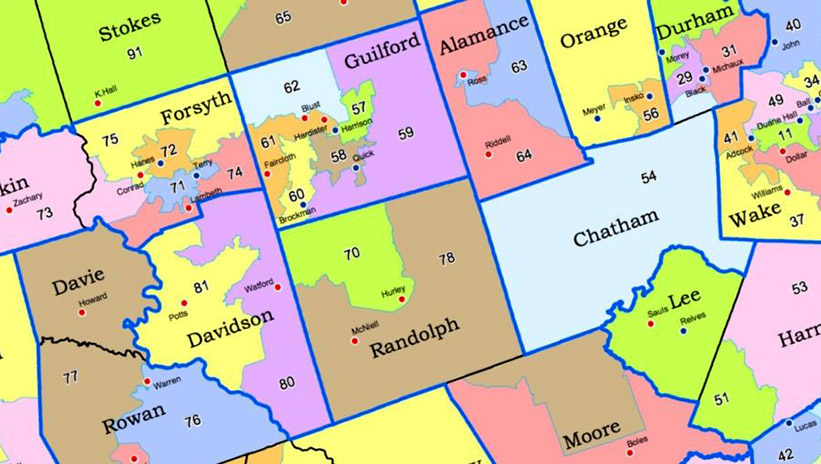 The state Senate's top leader responded by saying legislators "intend to respect the court's decision and finally put this divisive battle behind us."

"[T]he effect of these carefully crafted partisan maps is that, in all but the most unusual election scenarios, the Republican party will control a majority of both chambers of the General Assembly."

"[T]he 2017 Enacted House and Senate Maps are significantly tainted in that they unconstitutionally deprive every citizen of the right to elections for members of the General Assembly conducted freely and honestly to ascertain, fairly and truthfully, the will of the People," the court order continues. "The Court bases this on the inescapable conclusion that the 2017 Enacted Maps, as drawn, do not permit voters to freely choose their representative, but rather representatives are choosing voters based upon sophisticated partisan sorting. It is not the free will of the People that is fairly ascertained through extreme partisan gerrymandering. Rather, it is the carefully crafted will of the map drawer that predominates."

New maps are due to the court by Sept. 18. The court indicated that it will appoint a "referee" to judge those maps. That referee might draw maps for the court if it rejects the General Assembly's work.

Judges are limiting criteria lawmakers can use in drawing the new districts. "Partisan considerations and election results data shall not be used in the drawing of legislative districts in the Remedial Maps," according to the court order.

Acceptable criteria include standards for equal population, contiguity, and compactness. The districts must comply with previous court standards for county groupings.

Lawmakers can consider municipal boundaries. They can make "reasonable efforts" not to draw incumbents into the same district. They "shall make reasonable efforts" to split fewer precincts than those split in legislative maps used before the current maps.

Judges ordered lawmakers not to use the invalidated districts as a "starting point" for new districts. "[N]o effort may be made to preserve the cores of invalidated 2017 districts."

Lawmakers cannot hire any outside help for the new election maps without the judges' permission. Judges have ordered lawmakers to draw new maps "in full public view." "At a minimum, this requires all map drawing to occur at public hearings, with any relevant computer screen visible to legislators and public observers," according to the court order. "Legislative Defendants and their agents shall not undertake any steps to draw or revise the new districts outside of public view."

Judges are not allowing any potential appeal to delay their timeline for legislative action. Officially, the court "denies a stay of the remedial process." The judges also indicate that they reserve the right to change any 2020 primary election dates, including elections for offices other than state House and Senate.

State Senate leader Phil Berger, R-Rockingham, responded to the ruling. "This case is the next step in [former U.S. Attorney General] Eric Holder's drive to use judges to create a Democratic majority," Berger said in a prepared statement. "Thwarted at the U.S. Supreme Court, Holder has turned to state courts with Democratic majorities to, in his own words, 'favorably position Democrats' to game the redistricting process."

"We disagree with the court's ruling as it contradicts the Constitution and binding legal precedent, but we intend to respect the court's decision and finally put this divisive battle behind us," Berger added. "Nearly a decade of relentless litigation has strained the legitimacy of this state's institutions, and the relationship between its leaders, to the breaking point. It's time to move on."

"To end this matter once and for all, we will follow the court's instruction and move forward with adoption of a nonpartisan map."