Interior Presents the 2020 Independence Day Celebration in the Nation's Capital 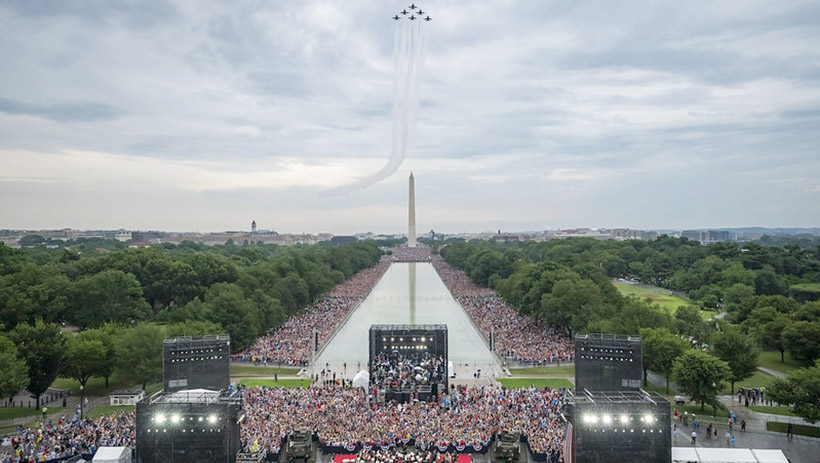 Navy Blue Angels flying over the Washington Monument and National Mall at the 2019 Salute to America | Photo: Tami A. Heilemann/Dept. of Interior

WASHINGTON — Yesterday, the U.S. Department of the Interior and National Park Service announced additional details about the Independence Day celebrations on the National Mall, which will include multiple flight demonstrations from different branches of our military, in particular the U.S. Air Force Thunderbirds and the U.S. Navy Blue Angels, and a monumental firework display.

President Donald J. Trump and First Lady Melania Trump will host the 2020 Salute to America on the South Lawn of the White House and Ellipse on Saturday, July 4, 2020, which will be livestreamed on WhiteHouse.gov and other news organizations. The National Mall and surrounding areas will remain open and available to the general public for prime viewing of both the Salute to America flyovers and the annual fireworks demonstration.

"President Trump's 2020 Salute to America will be a patriotic tribute to our men and women in uniform, and the Department of Defense will be providing a one-of-a-kind air show," said U.S. Secretary of the Interior David L. Bernhardt. "An incredible fireworks display will follow that promises to be the largest in recent memory."

This year's celebration will include flyovers that feature aircraft from the vintage WWII time period to the future warfare era. Highlights will include historic aircraft like P-51s and B-29s to the Blue Angels and Thunderbirds. These flyovers are being supported by generous donations from the United War Veteran's Council Foundation.

The firework display will be one of the largest ever and is being produced by two of America's premiere fireworks companies. Garden State Fireworks returns to the National Mall for a seventh consecutive year and is joined by Fireworks by Grucci thanks to a generous donation.

Fireworks are being launched from an area more than a mile in length, from Inlet Bridge at the south end of West Potomac Park to north of the Lincoln Memorial, as well as on the grounds of the Washington Monument. The show will be approximately 35 minutes long and will be visible throughout the District and Northern Virginia.

More than 10,000 fireworks will be launched at this year's show.

More than 800 acres of National Mall and Memorial Parks, equivalent to more than 600 football fields, are accessible for viewing the flyovers and fireworks, including the:


The firework display is viewable three miles away from the launch site, making other public locations, such as Anacostia Park, Meridian Hill Park, and the George Washington Memorial Parkway options for experiencing the show. This includes the:


Parking is allowed in designated parking areas only.

For any fireworks viewing location, the public is encouraged to prevent the spread of infectious diseases by following guidance from the Centers for Disease Control and Prevention for events and public gatherings:

If you are a person who has been identified by the CDC to be at an increased risk of becoming severely ill if exposed to COVID-19, please review CDC recommendations prior to attending this event.

The area from 17th Street to the Lincoln Memorial and between Constitution Avenue NW to Independence Avenue SW will be a secure area on July 4. Access will be via four entry points, and visitors will be screened entering the secure area. All coolers, backpacks, packages, and persons will be subject to inspection.

The following public access points for the secure area will open at 1 p.m. unless otherwise indicated and will remain open until 9 p.m. Visitors will be screened at all access points. There may be changes to access points on the day of the event to enhance security. The access points are at:


Complete information and updates on the Independence Day celebrations, including prohibited items, area and road closures, recommended public transportation routes, and more can be found online. Sign up for day-of-event emergency information notifications by texting JULY4DC to 888777.