The Impending Creep of Unionization Into North Carolina 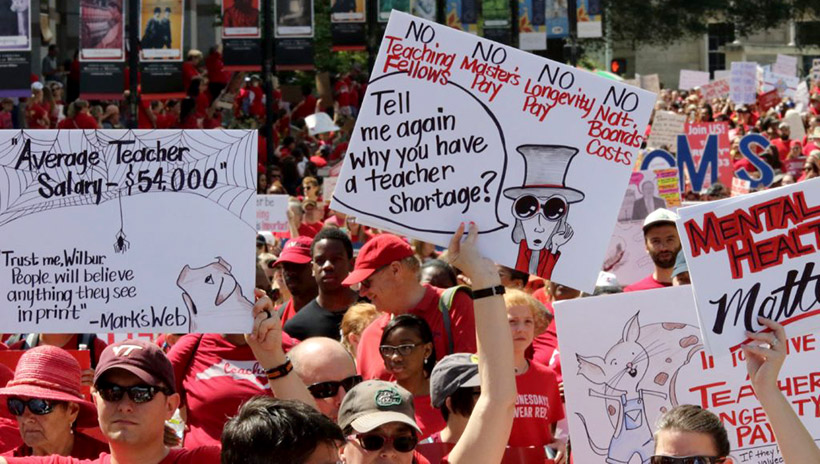 Teachers walked out of work and rallied at the N.C. Legislative Building on May 1, 2019. | Photo: Don Carrington / Carolina Journal

After the sale, complaints from residents were filed in the attorney general's office, and, on Feb. 25, Josh Stein sent a letter to HCA outlining concerns. Two days later, in a speech in Winston-Salem, presidential candidate Bernie Sanders told the crowd that "2,000 nurses at Mission Health in Asheville are standing up for their patients and their profession." Mission nurses were organizing with National Nurses United, the nation's largest nurses' union, which is organized in 19 of HCA facilities across the country. Thirty-seven of HCA's 184 hospitals have a union presence.

On March 6, NNU announced it was petitioning the National Labor Relations Board for a union election at Mission Hospital and, if successful, union members will have collective-bargaining privileges over benefits and working conditions, while taking choice from workers. The pandemic hit, and the union election was postponed, enabling Mission's staff to focus on COVID-19 safety measures, preparation, and patient care.

But, after four months, NNU was ready to move forward again and began organizing efforts among Mission's nursing staff. On July 2, the Democratic mayor of Asheville, chair of the Buncombe County commission, members of the Asheville City Council, Buncombe County commissioners, and the county's democratic legislative delegation sent a letter to Mission Health CEO alleging interference with union organizing among the nurses and encouraging efforts to proceed. HCA responded with a letter outlining their "well established policies" designed to give nurses the ability to share information while ensuring safe patient care.

Typically, a union election is held about three weeks after notification is issued. An election notification could be called any day, and the nation's largest nurses' union could have a foothold in North Carolina within weeks. Unions creeping into North Carolina will take away workers' choice, promote a radical progressive agenda, and do irreparable and long-lasting damage to our economy.

Why is North Carolina important?

North Carolina has some of the strongest right-to-work laws in the country. If the country's largest nurses' union can establish a foothold at Mission hospital, other health care systems could soon be unionized, the ban on public-sector collective bargaining could be lifted, and it would be just a matter of time before private-sector unionization spreads statewide. If North Carolina, the ninth-largest state and historically a pro-worker stronghold, falls to union executives and tactics, the rest of the country falls, too.

In an email, NNU Southern Regional Director Bradley van Waus warned about the importance of the Mission action:

"Perhaps due to the state's lowly unionization rates, a successful election at Mission could have an outsized regional impact. If Mission nurses vote to unionize, they would be joining National Nurses United, the nation's largest nurses' union. Doing so would not only elevate the state's unionization rate but may foreshadow more organizing at regional health care facilities."

Nurses are already looking ahead for next steps in unionization.

"Our campaign is an enormous thing for North Carolina and the South," said emergency room nurse Trish Stevenson. "This would set an enormous precedent for change, and it could happen nationwide for nurses. Health care is in dire need of a shift away from profit-driven corporations."

But it's not just the nurses' union threatening to weaken the state's right-to-work laws. The N.C. Association for Educators is acting like a union, with union-like activities — thumbing their noses at the state's ban on public-sector collective bargaining. NCEA organized tens of thousands of teachers for one-day walk outs in May 2018 and again in 2019 to march on the state capital, protest and demand more pay increases and Medicaid expansion, closing schools across the state. The Industrial Workers of the World provided transportation for participants, the Democratic Socialists of America stood in solidarity with the NCAE's union-like activities, and NCAE organizers have partnered with the nation's strongest unions, AFL-CIO, Service Employees International and Public School Union on demands and union activities.

In January, the NCAE Organize 2020 Racial and Social Justice Caucus tried to organize teachers to strike, surveying public school employees to see how many days — up to 10 — they'd be willing to miss to strike against their state government. In the end, they called off action for January but plan to discuss possible next steps. In the meantime, some teachers have called for a strike on social media, encouraged their colleagues to "consistently harass," and demand the state legislature pass bills allowing them to unionize and sent emails to members threatening to "mobilize every single person they can" to see them defeated. By the way, it's against state law for teachers and other public employees to go on strike. For now.

Imagine, in the middle of a pandemic, or trying to get kids back to school, nurses and teachers walk out.

Last month in Durham, hundreds of protesters under a national Strike for Black Lives movement gathered near a downtown McDonald's and marched and chanted, "We are the workers, the mighty, mighty workers, fighting for $15, $15 and a union!" Protesters claiming to be part of the Black Lives Matter movement have taken up workplace organizing, such as demanding hazard pay, causing intermittent work stoppages, and product/industry disparagement. Some teachers, while trying to get schools open again, have suggested on social media that educators strike. Since 2008, State Employee Association of N.C. has been affiliated with the Service Employees International Union, one of the largest unions in the country with deep ties to the Democratic party, liberal institutions, and the controversial community organizing group ACORN.

The state ban on collective bargaining was enacted in 1959. Despite strong right-to-work laws and a long pro-worker tradition, the South, and particularly North Carolina, is targeted for union organization in the private and public sectors. So far, North Carolina has rejected those efforts. That may be changing.

Democratic members of the NCGA have filed bills for decades calling for public-sector collective bargaining, most recently in 2019 with House Bill 710, Senate Bill 575. AFL-CIO, in their 2020 voter guide, "Issues Matter. Vote Union," have endorsed democrats Gov. Roy Cooper, Attorney General Josh Stein, Supreme Court Chief Justice Cherie Beasley, U.S. Senate candidate Cal Cunningham, and more than a dozen legislative and judicial democratic candidates. Leftist groups cite "remove barriers to unions" as a 2021 policy goal. With the demographic changes in the state and an influx of people moving here from highly unionized states and a pro-union culture, newcomers fail to recognize our right-to-work laws are the very thing that afford them the lifestyle they now embrace.

Reports and studies over the years show right-to-work states like North Carolina have more job growth and higher incomes than forced unionized states. Unions use workers' dues to support left-leaning political campaigns and issues. NNU reported more than $1 million toward supporting political activities and lobbying in 2019 and has supported radical legislation such as Medicare for All and the PRO Act, which would essentially outlaw right-to-work laws. Union cartels hurt consumers and workers, who are denied job opportunities, their efforts decrease the number of jobs available in the economy, they slow economic growth and delay economic recovery. Powerful unions with national and international connections have been involved with radical left-leaning political activities and causes, have protected bad actors, used threats and intimidation, and have been mired in controversy and scandals.

In North Carolina, just 2.3% of workers are union members. Many would assume the state is safe from public-sector collective bargaining and private-sector union organizing. They would be wrong. And they would be foolish to ignore the efforts of the NNU in health care settings, of the NCAE in our public schools, and the impending creep of unionization into North Carolina.