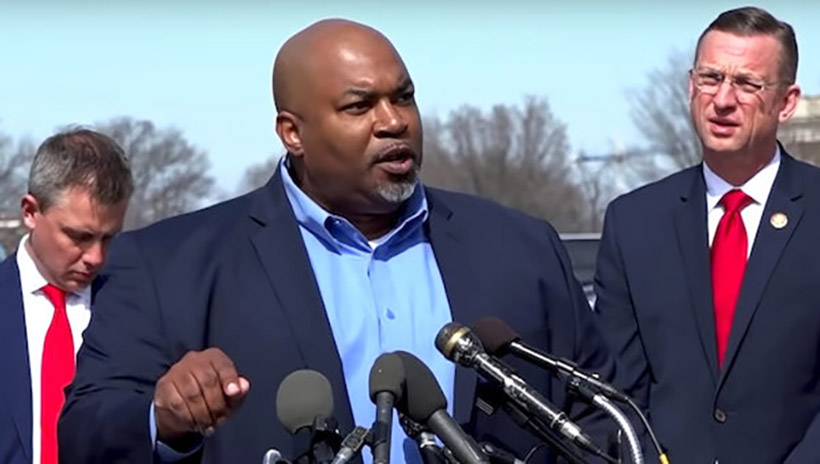 If you haven't experienced a Mark Robinson speech, you're missing a gifted orator. Watching the Republican lieutenant governor candidate is like being transported back to an old-time revival. At a Back the Blue rally a few weeks ago, I watched him captivate the crowd with his booming voice and inspirational message about freedom and being a black man in North Carolina and America.

As he makes his case for why North Carolinians should vote for him in November, he demonstrates the distinction between two black-lives-matter movements — little "b," little "l," little "m" or big "B," big "L," big "M" — in a way that only a black man can do. (Side note: I'd like to take credit for little blm versus big BLM, but that goes to a colleague who recently mentioned it to me.)

Little "blm" is literal and unifying. Of course, black lives matter. Just as all lives matter because each life matters to someone. Supporters of blm invite dialogue and free speech.

Big BLM is the violent, Marxist, divisive movement with secular religious undertones. BLM seeks to shut down speech, to defund the police, and to coerce corporations to contribute millions of dollars to the BLM organization.

While blm is uplifting and moves Americans toward a "more perfect union," BLM seeks social upheaval, chaos, and violence to destroy our union.

Robinson is dangerous to BLM and those on the Left who champion it. He disrupts their narrative and does so with authenticity. He's not a career politician. He burst on the scene in 2018 at a Greensboro City Council meeting with an impassioned four-minute speech about the "majority" of law-abiding gun owners.

He's fearless in the face of BLM and its woke mob followers. At the rally I attended, he confronted roughly two dozen BLM protesters who amusingly tried to shout down, "When is the last time you saw BLM scream at Crips and Bloods that black lives matter?"

He followed up with this powerful statement: "Republicans are the original black lives matter" movement with blood, sweat, and tears of the Civil War. On a hot, humid summer afternoon, Robinson had people in the crowd on their feet, applauding and cheering.

At a time when people fear being harassed, being boycotted, being called a "racist," or being a victim of criminal violence, Robinson is unafraid to challenge the group responsible for much of the chaos — BLM.

Earlier this year in Charlotte, he made his case for being contrarian: "You make the Left mad when you have brown skin and your own mind and are self-determinant." And he added, "In this place [America] my people have thrived more than any other place on earth." That doesn't sit well with the violent, woke mob.

The good news is Mark Robinson isn't alone. Other black men and women are coming forward to warn about BLM, the hysteria of the "systemic racism" narrative, and the meteoric rise of cancel culture.

In what is now probably considered counterculture, 1776 Unites, a direct response to the New York Times "1619 Project," features those black men and women, including two of my academic heroes — Brown University economics Professor Glenn Loury and Professor John McWhorter of Columbia.

In a recent hourlong conversation on the Glenn Loury Show, McWhorter and Loury offered a harsh critique of the current cultural climate of racial hysteria. McWhorter asserted that racism is the "only arrow" in the woke mob's "quiver" and added that it's something "right out of the French Revolution" minus the guillotine. He also calls Robin DiAngelo's best-seller White Fragility a "bizarre little manual" that actually diminishes black people because it condescendingly talks down to them.

McWhorter, a linguist, admits to struggling with how to describe the racial hysteria adherents. In a forthcoming book he says he labels them "parishioners" invoking a sense of religious zealotry, which seems appropriate.

Most interesting was their mental exercise replacing the word "racist" with "witch." Every time someone calls another person "racist," insert the word "witch." Just like the infamous Salem witch trials of 1692, the "parishioners" see witches everywhere, and Twitter and the media are their court where the accused are tried, convicted, and condemned.

The list of condemned is long and includes famous names like Andrew Sullivan, formerly with New York Magazine, and Harvard Professor Steven Pinker. The list of those challenging BLM is growing too including Robinson, Loury, McWhorter and others.

Just as the Salem colonists grew weary of the hysteria, I think Americans will tire of the Marxist BLM along with its anger and cancel culture. When the history of this period is written, I hope these heroic black Americans are featured prominently. That means we've recognized the difference between blm and BLM and rejected the latter.