It's all about power | Beaufort County Now | We're talking about the flap the Silly People have raised about a sign in Hood Richardson's office window at 208 N. Market Street.

It's all about power

Our partner in this business (online news), Stan Deatherage, is fond of calling it the "silly season." It would be more to the point to call it "silly people." In this case "people" would be Ashley Woolard, Bill Tarpenning and by proxy, Arthur Williams.

We're talking about the flap the Silly People have raised about a sign in Hood Richardson's office window at 208 N. Market Street. Woolard is reported to have filed a "complaint" with the State Republican Party about the sign. We thought it so silly we have not reported on it until now. But in light of the spreading controversy within the N. C. Republican Party across the state we now believe it worthy of comment.

You can read the story at Beaufort County Now.

First, let's deal with the merits of Woolard's "complaint." It is meritless. That's true simply because there is no state or local regulation in the GOP Plan of Organization that prohibits a Republican from endorsing another Republican. There is a provision that a GOP official cannot endorse a non-Republican against a Republican who has won the party's nomination. That is deemed "disloyal" and such officials are barred from holding a party office if found to be "disloyal." But there is nothing that prohibits a Republican, office holder or otherwise, from endorsing a Republican running against another Republican. Therefore, Woolard's complaint is without merit.

But there is merit in the approach the GOP takes to the issue of party loyalty. The distinction they base their regulation on is when it becomes disloyal to support a person running for office from outside the GOP. It is after the primary. And that is an important distinction. There is a difference between Republicans choosing who will represent the party and a Republican official not honoring the decision of the members of the party when the members of the party have selected a candidate to represent the party.

Charles Hickman, the chairman of the county GOP, told the Observer that his position is that since Woolard did not file his complaint with the local party that it was his intention to wait to see what the State GOP did about Woolard's complaint. That is very appropriate.

We doubt the State GOP will touch this one with a 10-foot pole. To understand why we say that, you can just read George Schryer's comment on the BCN article. George said: "So it is ok to limit local party involvement in primary races but not Raleigh's involvement in local party primaries. Also Walter B. can endorse a local candidate but a local commissioner can't. Sounds like political doublespeak or sour apples or complete lack of logic to me. And what happened to the 1st Amendment again?" That about sums it up. Or to put a finer point on it, one has to wonder if Woolard, Tarpenning and Williams do not actually see the hypocrisy in their position. They complain about Hood's endorsing Lawson over Williams but then issue a press release to the local Democrat cheerleader making a similar endorsement of Williams.

And how silly would it look for the State GOP to censure Hood or the local GOP for endorsing one Republican over another and not apply the same standard to state GOP officials and officeholders?

There are some Williams supporters who argue that the local party should not endorse one Republican over another, or have it appear that it is doing so. The problem with that argument is that even as we speak there are some signs up at the headquarters for some Republican candidates but not others. Does that not give an "appearance of bias?" When you split this hair you clearly have arrived at the silly season.

What's really silly is all this stuff about "endorsements." You have to be pretty elitist to think that voters are going to cast their ballot for one candidate and not another because some official has endorsed a particular candidate, whether it has been done via a sign on a window, a press release, or public statements.

The controversy raging now about state GOP leaders meddling in local primaries is a different matter however. The difference, in a word, is power. When an official who holds a position of power attempts to pick and choose who is going to run for an office--and in effect limits the choice of the members of their party to pick their candidates--we see that as much more serious than an endorsement. Endorsements don't really amount to a hill of beans. Manipulating who's going to run does.

This distinction does make a huge difference. The viability of a political party is really at the "grassroots" level. The selection of candidates who run at the local level should be decided at the grassroots level. Once it goes beyond a local district's boundaries it is another matter, but at the local level local people should pick the candidates. And state leaders not only should respect that, they should work actively to cultivate such involvement. That is the essence of our republican form of government.

The major difference between a grassroots approach to selecting candidates and the leaders in Raleigh doing it is a matter of the abuse of power. Hood has no real power if he tells anyone how they should vote. Even after he's endorsed a candidate he has no power to enforce it. But a party official or elected state leader who picks a candidate to run in a primary at the exclusion of others has an infinitely greater probability of exerting power over the real choice the party's voters will have in a primary. Anybody who knows just a little about politics knows that if the Speaker of the House, for example, tells a member of his party he/she should or should not run that has infinitely more influence than a simple "endorsement." After all if a candidate runs against the Speaker's wishes and gets elected what does that do to the working relationship? The difference is in the application of effective power. It is an abuse of power for a state leader to meddle in selecting local candidates, just as it is an abuse of power (legally it is called harassment) for an employer (or teacher) to "suggest" that an employee (or student) should perform "certain acts" the holder of power seeks be done. The issue is whether one person has power over another. And it matters not whether it is implied power or exercised power. And in politics it's all about power.

This issue is really much larger than Hood's sign. It is a shame that Greg Dority, Bill Tarpenning and Ashley Woolard are pushing a silly idea that power in the Republican Party should be further concentrated in Raleigh as opposed to being exercised at the local level. Not surprising mind you, but shameful.

All three of these individuals fancy themselves as politicos, savvy in the ways party politics. All three have experience with what the results have been with this concentration of power in Raleigh at the expense of the grassroots workers in the party at the local level. One only need rcall two names to recall those results: Jim Black and Marc Basnight. 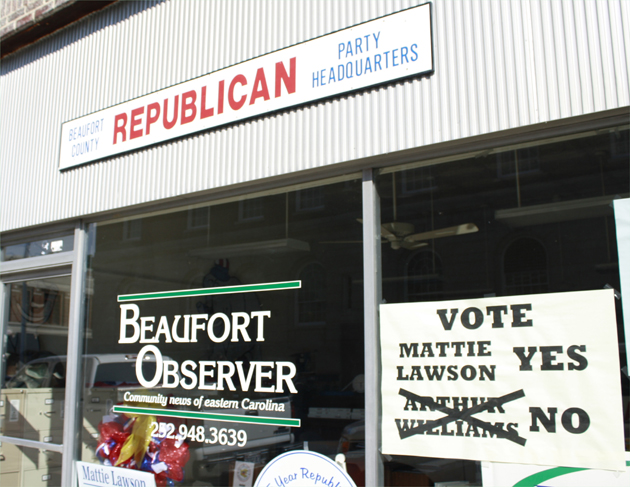 The storefront in question: Above and below.     photos by Stan Deatherage 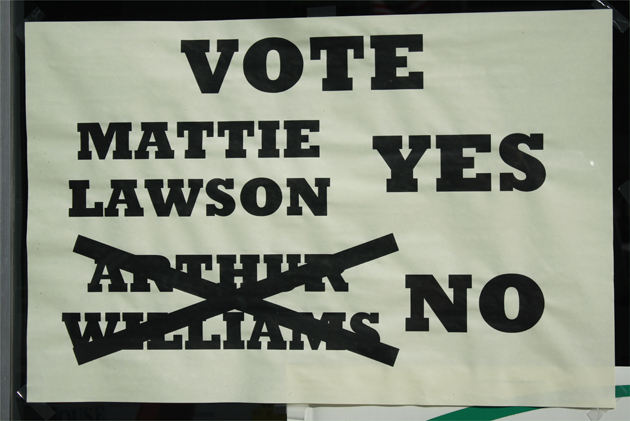 Yet Dority, Tarpenning and Woolard have cast their lot with a group trying to do the same thing in the Republican Party that Black and Basnight did with the Democrat Party. They have "endorsed" one of the political hacks from that very regime. Arthur Williams was a pawn of Black and Basnight, but nevertheless a disciple of centralized power by a handful of political bosses who called the shots.

The hope that Republican control of the Legislature gave many was that such machine politics was a thing of the past. Now it appears some Republican "king-makers" are bent on doing the same thing.

That Woolard filed his complaint with the State GOP rather than the local GOP Executive Committee is telling above all else. But it is also instructive to recall an impromptu speech Woolard gave to a group of local Republicans back during the filing period. He argued that the only way Mattie Lawson could possibly win was if she raised "a lot of money." No doubt he believes that. But therein is exactly what is wrong with both political parties in this state. They both prostitute themselves to the money interests. Lawson, on the other hand, has conducted a grassroots campaign. That is to say, she relies on unpaid volunteers to work in their neighborhoods, church meetings, civic clubs, social gatherings and in one-on-one campaigning rather than depend on thousand-dollar-a-plate donations from special interests. Arthur Williams is a master at that kind of politics. Thus, it becomes amusing that he would worry about a little sign in Hood Richardson's window.

Williams told a group recently that he knows "how to get things done in Raleigh," So did Jim Black, Marc Basnight, Mike Easley, Bevery Perdue et. al.
Go Back