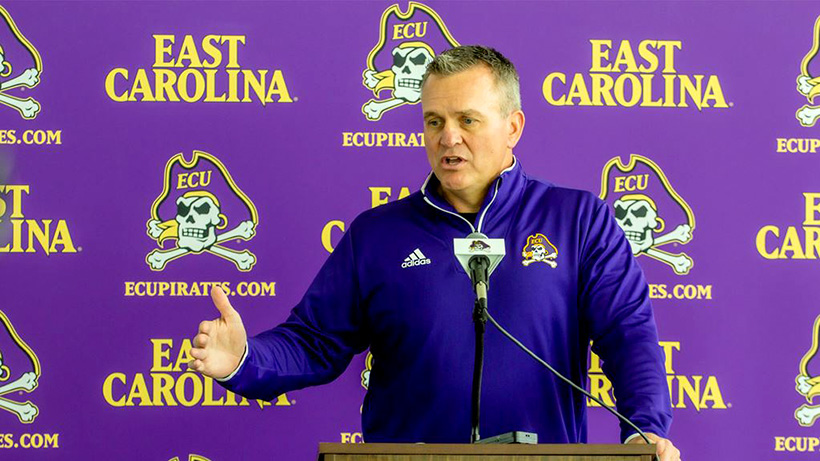 Opening Statement:     "Something we may have taken for granted in the past; we aren't taking for granted today. That's having an in-person press conference. For everyone's knowledge out there, everyone is distanced. I'm the only one not wearing a mask so this is a COVID protocol-appropriate press conference to discuss the end of the football season and the beginning of the offseason — the next steps for East Carolina football.

"I could not have asked for a better end of the season. The two-game winning streak to close out, especially being able to win the finale here at Dowdy-Ficklen Stadium in the manner we won it against a quality opponent was the perfect script. Just really excited for the players and coaching staff for the hard work they did each week throughout the fall with everything they had to manage just to play football. If you would go back to 2019 and say this is how you were going to have to play, manage and practice in 2020, no one would have believed anyone. There is no way you thought you could pull it off with everything you had to go through with the protocol and testing and the way you had to meet and practice. Not having spring practice. Not having summer training. It took a lot resource wise. It took a lot mentally for each person involved. The way this group came together and functioned throughout the season, I'm just very proud of them. You guys didn't get to see this group work throughout this year, but the way they practice now versus what it was two years ago tomorrow when I took this job is night and day. They work and practice now the way I expect them to and the way that winners do. The result is their continued improved play on the field.

"That moment postgame Saturday on the field is something I thought about throughout the week because of the way I thought our program was trending. I felt like we were going to play well Saturday. I didn't expect 45-7 at the half. I wanted to capture that moment so I got them together for a postgame photograph with TowneBank Tower and the fans we had in attendance in the background because in that moment, which I talked about in our final team meeting before they went home, we have an opportunity that many long for. Hopefully it's when everything flipped for our football program, the players and direction we're headed. Great weekend. We had great weather. I know we only had 3,500 in attendance but I appreciate them because it was an electric atmosphere in the stadium. I wish it would have been 50,000 because it probably would have been suffocating for the opponent with the energy that was on our sideline and in the stands. You could feel it. It was a great way to end the season. There is a lot to reflect on in the coming months and lot to discuss today. Certainly, as we stand here today, things have changed drastically as opposed to Dec. 2, 2018."

On The Status Of The Roster Currently:     "I've had a lot of dialogue with our players over the last month. We're anticipating the vast majority to return next year. We'll have a few that were recognized on Saturday that where they are in life — graduating from East Carolina University — and having made preparations to go to that next step where they will transition on. We support them and will celebrate them. There are one or two that have some things to consider. Those guys were probably not coming back, but having had such a positive experience, they want to discuss things with their families.

"We feel good about the roster that's coming back. I don't want to stand up here and put a dead number on it now, but the vast majority will be back next year. We also have a recruiting class we will sign, part of it on Dec. 16 and the rest throughout the spring and early summer to have a full roster ready for next fall. As far was where I think we are right now going into what I hesitate to call year three, since we were really robbed of an offseason, I think we are in a really good spot. My expectations are very high, and the kids' expectations are very high. Whatever goals our fanbase has, I promise you that our internal goals will exceed that.

"We have a lot of work to do. Despite all the damage the pandemic has done, especially with the financial impacts where families have been devastated, there has been one positive with the extra year of eligibility. I went through the room. Holton, you'll be a junior next year. Bruce Bivens, you'll be a senior next year. Rahjai, all those defensive lineman, you're going to be freshmen next year. They have a tremendous amount of experience now. Experience is not something you can create. You can't replace it either. We have a special moment the next eight months to capitalize on the opportunity to take an experienced group of freshmen and develop them. We laid out a plan yesterday. It's just over six weeks until they return. They'll start returning the week of Jan. 10. We'll have to go through testing before they start working out. We'll begin our winter conditioning the week of Jan. 18. We have to hit the ground running on that date. They have to be in shape before they return because I don't want to have to get them in shape then.

"We struggled with the quarantine. There were guys that didn't recover from the quarantine. We didn't manage that as well as I would have liked to. We can't have that happen between now and Jan. 18. We have a chance to hit the ground running and have a great couple of weeks of strength and conditioning. Mack drills with the coaching staff. Teaching a group how to have spring practice and a summer. It's not just lifting weights and running. It is character development. It is team, cohesive development. It's maturity. There are so many things this group did not get last year.

"Heading into 2021, we have the chance to become a highly-competitive team that can compete with anybody. Our schedule is tough next year. There's no bones about it. We're going to play quality non-conference football teams. The American is a beast. We have goals that are very lofty."

On Offseason Focuses:     "The number one focus right now is our current roster. Guys need to heal up. We did have some injuries down the stretch. I told the guys they need to unpack the season and decompress. For example, Fernando Frye played an enormous number of snaps. They need to let their bodies rest before Jan. 18. We need to stay on top of our current roster and have them in a good place heading into the spring semester.

"Recruiting is the other big focus right now for the staff. We're starting virtual visits tomorrow. We're using some of the suites up here (TowneBank Tower) trying to show recruits and their families everything they can't see. We're trying to get as much face time with recruits and families that we can over the next two weeks and develop the relationship that we haven't had the opportunity to develop. Right now, we have 10 commitments. I don't see us signing a number enormously larger than that on Dec. 16. That's on purpose. We have specific needs we're being very direct with in terms of the offers we are sending out. I like our returning roster a lot. I've said it all year — I like the kids in our program. We have put this together with some intent. I'm so proud of the older players we have that have been with us here the whole time. I mentioned Bruce (Bivens) earlier. He's playing the best ball of his career right now. He carries himself as such a positive leader. Those guys have changed. I'm also proud of the young group that has joined them. We need to make sure we are very cautious but direct with who we bring in.

"We have the culture we said we wanted to create. We're achieving at very high levels academically. We're representing the university in a very positive manner. I talked to them yesterday and said I pray we don't have an incident that douses that between now and when they come back in January. I talked to them about all the things they need to be cautious of. They need to represent each other and the university in a first-class manner. They're doing that. Our play on the field in continuing to improve so the roster is my biggest focus right now. All of those things I mentioned before from strength and conditioning to spring practice will be critical.

"We need to do the postseason evaluations of schemes, what we did on the field that was good and what we didn't do well. I'm not in a big hurry to do that but we're beginning it this week. I want to take my time with it as we look toward tweaks and changes that we're going to make moving forward. That will take place over the next month and some change. I pushed spring practice about as far back as I could. We aren't going to start until mid-March at the earliest. The spring game will be in late April. It will be the latest I can have it before final exams. I want to give Coach Big John and his staff the maximum amount of time they can have with these guys in the weight room and on the field. Bigger, faster, stronger and — for some of them — slimmer. Those things, as well as maturity, are what I want to focus on right now."

Read the rest of the press conference HERE.