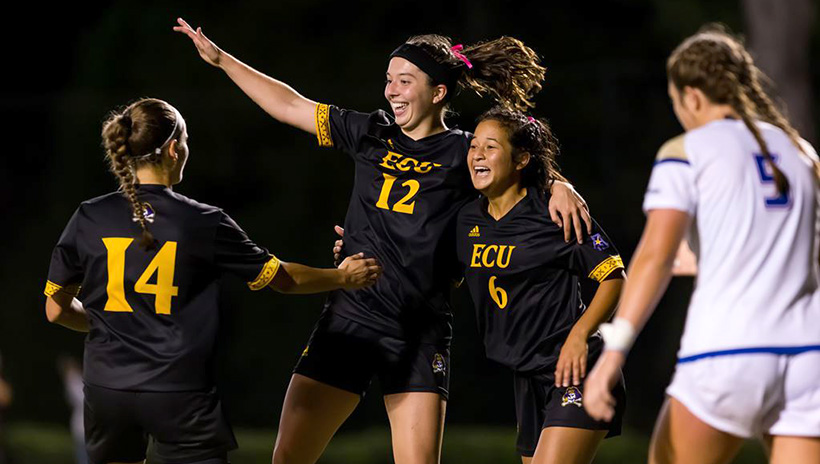 "We are very excited for this group to join us," Hamilton said. "We believe they are very talented and will have an immediate impact on the program. This is a group that excels not only on the field, but in the classroom as well — truly a representation of what we want in this program.

"In this class, we have added individual talent, athleticism and physicality. We know that combining a group of this caliber with what we already have here in the program will make for exciting times for ECU soccer. You see a lot of individual and team success when looking at their bios and we are confident that we will see that success continue as they begin their time here as Pirates."


Hamilton on McWhirter: "Haley has an incredible drive that has made her the player and student she is today. She is a dynamic, attacking player that is dangerous in a lot of ways. Effective with both feet, she can beat you to either side. When she drives toward goal, she has the ability to hit the ball with both feet from distance and penetrate on the dribble. When she beats someone wide, she serves a dangerous ball in to the area that leads to chances from her teammates."


Hamilton on Schlagel: "Holly has the athleticism and physicality that will translate to the college game very quickly. Her ability to play in different places on the field will benefit her with how we play, as she has spent time in the midfield and as a forward."


Hamilton on Godbey: "The athleticism and physicality trend continues with Peyton. She strong, fast and physical and it all shows in her play. She is a very attacking minded defender who fits exactly what we want with our outside backs. She also brings versatility with her to play as a forward."


Hamilton on Thomas: "Molly brings a lot of good qualities you want in a holding mid. She is very good at seeing and attacking the ball in the air. She likes to get on the ball and her passing range enables her to open up the game. Molly has a very polarizing personality that will be welcomed into the program."


Hamilton on Aiken: "The first thing I noticed watching Lindsey was her involvement in the attack. She fits exactly what we are looking for in our outside backs. She is very comfortable on the ball and has no hesitation in jumping into the play."


Hamilton on Moxie: "Sam is a very well-rounded player. A lot of people will focus on the how much pace she has, but I think her technical ability is often underrated. She will be a very dangerous attacking player, and her history of scoring goals is something we look forward to having here with us."


Hamilton on Sowa: "Abby is another one that checks off the athletic and physical boxes for us. She is very scrappy and puts her body on the line for her team. She brings a leadership aspect as well, having been in the captain role with both her club and high school teams — something that shows when you are watching her."


Hamilton on Lusardi: "Izzy hails from a club that I believe prepares her well for our program. She joins former club teammates Annabelle Abbott and Adie May, who began their college careers at ECU this year. There are quite a few similarities in the way we play and what we demand from our group that have allowed the other players from that club to have a fast acclimation when arriving. Izzy is quick with a good one vs one mentality. She puts herself in good positions around the goal to be dangerous."