A time for choosing.-- a test for our souls | Beaufort County Now | Our nation is facing a crisis. This article summarizes the causes well.

A time for choosing.-- a test for our souls

By:  Observer Editorial Board

THESE are the times that try men’s souls. The summer soldier and the sunshine patriot will, in this crisis, shrink from the service of their country; but he that stands it now, deserves the love and thanks of man and woman.

Tyranny, like hell, is not easily conquered; yet we have this consolation with us, that the harder the conflict, the more glorious the triumph.

What we obtain too cheap, we esteem too lightly: it is dearness only that gives every thing its value. Heaven knows how to put a proper price upon its goods; and it would be strange indeed if so celestial an article as FREEDOM should not be highly rated.

Those words were written at a time that it was far from certain that the colonies would achieve their independence.  In fact, in December, 1776 few would have given the cause much of a chance.  Things looked bad when Thomas Paine penned those words. 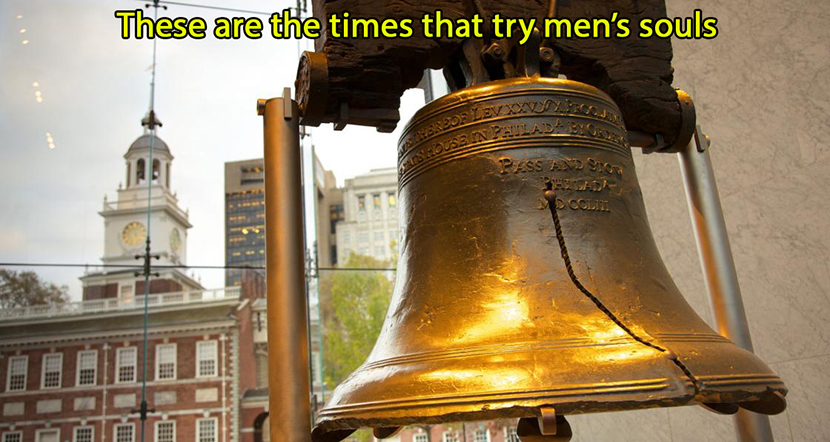 Now today we face a similar uncertain future.  The Editorial Board of the <i>Epochtime.com</i> has summarized it well in posting this editorial on January 4, 2021:

The political crisis the United States faces brings into the open a contest for the soul of our country. As important as this recent election is, the stakes transcend particular political arrangements. They go to fundamental issues about which each of us must make a choice and take a stand.

A peculiarity of our current situation: While every American is intricately familiar with the pandemic and the effect it has had on our lives, this is not the case for voter fraud, despite the evidence being overwhelming.

Some Americans are ignorant of these facts because they have been misinformed by a media that willfully withholds information. The reason for this might surprise you.

There has been a force quietly at work in our country, in plain sight, that has gradually taken over ideological control of most of our institutions, businesses, media, and even our culture.

It is not that we weren’t alerted. It was the stated goal of the Soviet Union to infiltrate our political parties, media, and academia, in an effort to subvert America from within. This process is now almost completed.

This decades-long communist subversion of our nation came to a head in the 2020 election.

While before our major political parties didn’t differ that much on a fundamental level, gradually one of the parties was subverted by communist groups.

During past elections, both parties would wave the American flag and sing the national anthem, but now one side genuinely believes America is a fundamentally flawed nation.

Over the summer, Marxist groups such as Black Lives Matter (BLM), which was founded by self-proclaimed Marxists who have hijacked genuine concerns over racism for political purposes, and the far-left Antifa group, were behind riots and violence. These groups have direct ties to communist groups connected to the Chinese Communist Party (CCP).

Among the statues torn down in these riots were those of Thomas Jefferson, George Washington, Francis Scott Key (author of the national anthem), Saint Junipero Serra, and even of Jesus.

For those who escaped communism, seeing our nation’s heritage under assault felt no different than the Cultural Revolution seen during the 1960s in communist China. Wherever communism goes it targets a country’s history, principles, and beliefs in an effort to force control.

During the Cultural Revolution, the media relentlessly attacked then-leader of China Liu Shaoqi. Liu was removed and suffered a miserable death.

The young “Red Guards” destroyed all the antiquities and cultural relics they could find. They beat anyone who had knowledge of traditional culture, and they tore down temples and destroyed statues.

It is the exact same communist ideology that is driving today’s BLM and Antifa movements in the United States. They are trying to destroy our traditional morality and the traditional structure of society. Anything that reminds people of tradition inherently reveals, by contrast, how communism is against society and against humanity.

Communism is not merely a bad economic model. It is an evil system responsible for the killing of more than 100 million innocent people over the past 100 years. It has destroyed civilizations and the good traditions and cultural heritage of many countries. And it has incited hatred in people everywhere it goes.

The CCP sees the free world—and especially the United States—as a mortal threat to its dictatorial rule. It will do everything to defeat and destroy America.

Over the past two decades, the decline of moral standards in our own country has made it possible for communist China to take advantage of our system.

It has systematically bought and blackmailed our key elites in government, media, academia, and business. The “honey trap” Rep. Eric Swalwell (D-California) appears to have fallen into is only the tip of the iceberg.

Using women and money, the CCP was able to bring many elites under its control. It has also bought influence over Wall Street. The Wall Street elite—responsible for pressuring companies to move to China–made most of the profit from this shift of America’s manufacturing base to China. Meanwhile, it is Wall Street money that has supported key businesses in China, including China’s military development.

As Chinese professor Di Dongsheng, associate dean of the School of International Studies at the Renmin University of China in Beijing, recently revealed, the CCP has used its “good friends” in Wall Street to manipulate the United States, politically and financially, for decades.

The CCP has studied America in great detail. It has analyzed every congressman, senator, governor, and even each lobbyist, and has figured out exactly how our system works and how to corrupt the key people in our country. This is why the CCP was able to be so deeply involved in the 2020 elections, while at the same time remaining mostly invisible.

This corruption and manipulation is for the sake of reordering the United States, and then the world, according to the CCP’s principles.

Struggle involves fighting to get one’s way. The fighting may be physical or psychological. In any case, law and truth are set aside for the sake of power.

Materialism involves understanding ourselves from the bottom up. Humanity is described as a collection of desires such as hunger, fear, and lust. Higher things, such as conscience or spirituality, are not recognized.

Atheism involves denying the existence of God, and with that denial, humanity loses the morality and true independence that come with belief.

The CCP has developed a regime of censorship, propaganda, and social control that is enabling it to put in place the most perfect tyranny known in history.

Should the CCP complete its conquest of the United States, then the forms of that tyranny will be introduced into the United States, and Americans will learn to live, feel, and think according to CCP principles. The United States and the world will enter a seemingly endless night in which the light of meaning and truth will have been snuffed out.

That moment hasn’t come yet. All Americans have their destiny in their hands. And by determining their own fate, they can help determine the future of our country.

The fundamental basis of any nation is its morality.

While the CCP has for decades sought to corrupt our morality, individual Americans can choose to reject the blandishments of communism in favor of traditional morality.

Americans can choose honesty instead of fraud; personal responsibility instead of socialism; truth and freely reported news over propaganda and censorship; and belief over atheism.

This is the sure path to find safety.

As we are facing an unsettled election and the resurgence of the CCP virus, positioning ourselves on the righteous side is more critical than ever. In both Western and Eastern ancient cultures, plagues had reasons for their attack, and people with honesty and a righteous mind could survive.

Tomorrow morning (January 6) stop a moment and say a prayer for our nation, our liberty and the future of our children and grandchildren.  It is greatly needed and we are convinced that without God’s grace we shall not endure and a free people.