Democrats in Congress are hypocrites on violence and mobs 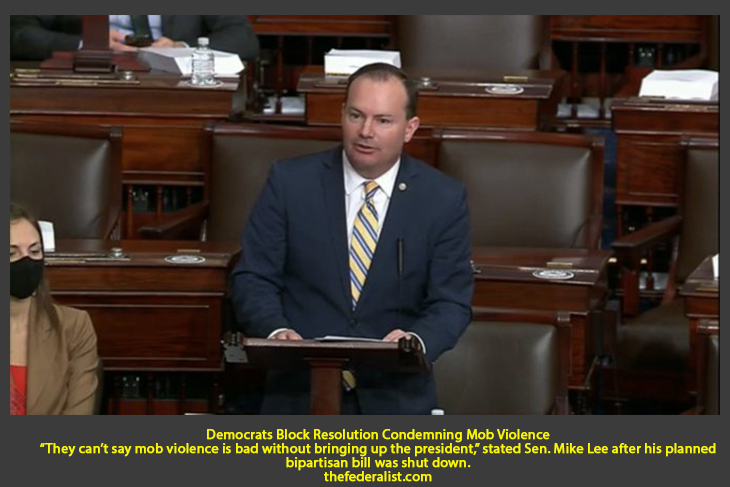 When a mob of rioters stormed the U.S. Capitol building on Thursday, leaders from both political parties universally condemned the historic act of political violence.

“To those who wreaked havoc in our Capitol today- you did not win,” Vice-President Mike Pence stated to the chamber shortly after the rioters were expelled from the building by police using tear gas and percussion grenades. “Violence never wins.” He was joined by the Republican senators across the board, including those who had backed plans to object to the election’s certification.

After ignoring and justifying riots from left-wing groups for months, Democrats also condemned the Capitol violence. “This assault is just that. It shows the weakness of those who’ve had to show through violence what their message was,” House Speaker Nancy Pelosi, D-Calif., said.

Senate Leader Chuck Schumer, D-N.Y., echoed the sentiment, arguing those who using political violence should face the harshest penalties available. “Those who performed these reprehensible acts cannot be called protesters – no, these were rioters and insurrectionists, goons and thugs, domestic terrorists… they must and should be prosecuted to the full extent of the law.”

The cross-party condemnations came as a welcomed move. But that very the same Congress was anything but united on the issue of mob violence remarkably recently.

This July, those same congressional Democrats killed a resolution aimed at curbing mob violence. The bill, which was spearheaded by Utah Sen. Mike Lee, R-Utah, came about after an unarmed Utah man was murdered by a mob of left-wing activists. At least 30 people, ranging in age from 14-77, were killed in largely left-wing riots in summer 2020.

Lee’s resolution offered a statement of support for peaceful protest, while condemning violence and the desecration of monuments.

“A non-binding resolution is the tiniest first step of a response,” Lee read as he introduced it. “We need to do much, much more… but in this divided political moment,… showing that Senate Republicans and Senate Democrats are able to speak with one voice against woke mob violence and in defense of equal justice and civic peace would be a welcome step.”

Yet the bill was killed upon landing by Senate Democrats. Sen. Bob Menendez, D-N.J., who spoke immediately after Lee, alleged that “the resolution reeks of supremacism. Reeks of supremacist views. And it seeks to mischaracterize overwhelmingly peaceful protests across the nation.” He then proceeded to poison pill the legislation by announcing the bill would only be passed if it specifically condemned President Donald Trump.

Lee attempted to compromise, saying he was willing to include the section condemning all politicians who incite any violence without specifically naming any. Menendez refused to budge, and the resolution died.

Six months later, violence from the other side lead to congressional Democrats voicing opposition to politically charged assault, arson, vandalism, and more. Some commentators, including Laura Ingraham, were swift to show the receipts.

Lee’s bill was not the only time anti-mob legislation was shut down by congressional Democrats last summer. A bill led by Republican Rep. Ken Buck this November, The Blocking Rioters and Insurrectionists from our Cities to Keep us Safe (BRICKS) Act, would have enabled a range of greater legal penalties for such crimes. It died in the Democrat-run House Judiciary Committee.

Had the bill been passed, rioters could be sentenced to up to ten years in prison. Those whose acts lead to the “serious bodily injury” of others would have faced even harsher sentences.

Instead, the rioters who stormed the Capitol will take a maximum of five years for rioting — an amount just between the U.S. sentencing laws for possession and sale of marijuana.