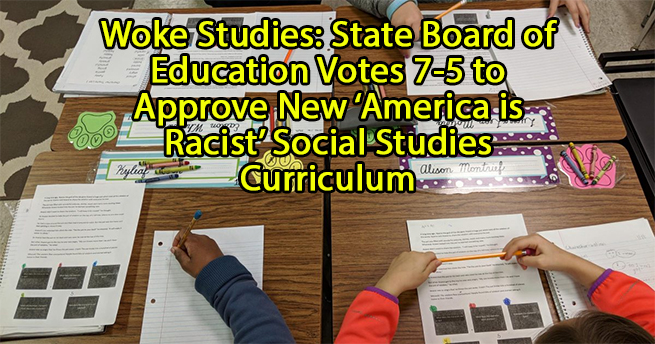 The N. C. Board of Education showed Thursday why school choice is the only thing that can save our children.  The Board split along party lines, 7-5 to approved a new social studies curriculum that is strongly anti-American.  Jeff Moore, writing at First in Freedom Daily.com reports:

All five Republicans on the State Board of Education voted against the measure that member Lieutenant Governor Mark Robinson, the most vocal opponent of the new standards, deems divisive and overtly political. Yet the seven Democrats on the Board are not backing off their drive to transform education, and American history specifically, into the Woke version necessary to advance their cause.

Those members, like the Radical Leftist James Ford, contend that the days of hailing American exceptionalism are gone because America is “getting browner.” He shares the delusion that the traditional education curriculum presents America as flawless, and the interest in presenting it has inherently and systemically racist.

Such standards are no less than an embrace of the Critical Theories that are fueling the Black Lives Matter Inc. and the associated Woke Cultural Revolution. Even so, the supporters argue that the standards are more guidance, than specific curriculum assignments. One look at the themes of the standards, though, leaves no doubt that this would mandate a Woke Education in social studies across North Carolina public schools.  OHere’s a brief overview of what the standards actually change, from Andrew Dunn at Carolina Journal:

“[…] The standards outline the broad topics and themes that teachers must cover at every grade level, K-12, in North Carolina’s public schools. They’re not curriculum, and don’t dictate the specific events to be studied and books to be read. That will come later.

The new standards add a particular focus on “indigenous, religious, gender and racial groups” as early as the second grade. They also redefine racism, moving away from personal prejudice and toward a “complex system of racial hierarchies and inequities.”

The changes have been nearly two years in the making and have gone through multiple drafts. More than 7,000 people submitted comments on the proposals.

Back in July, the State Board of Education voted to delay adopting any revisions to the social studies curriculum until more work could be done. […]”

Redefining racism in this way isn’t some feel-good compromise on how to treat the nuances of racism; it specifically adopts the language of the Woke in a defacto endorsement of it’s fundamental anti-American, ant-Capitalism, anti-Western philosophy. All under the Orwellian guise of ‘Anti-Racism.’

Lt. Gov. Mark Robinson has spoken out powerfully on these standards and why they should be opposed. For that, he was depicted by the Leftist media as a KKK member. After all, he opposes the Woke worldview, and therefore must be a fervent racist, aiding in the white supremacist culture set up by our founders and ingrained over generations of evil capitalism.

Due to the radical nature of the standards, the language was ‘softened’ some. ‘Systemic racism’ became merely ‘racism’ (the guidance makes it clear enough that it is systemic); gender identity becomes identity (well, yeah, amorphous, pick-your-victim identity goes beyond gender. We must allow for white Wokies to identify as black, right?); and, other term changes that make the indoctrination less blatant, but no less comprehensive.

Parents of public school kids who don’t wish to see their children brainwashed with such Woke drivel will have to actively combat it with actual education at home. Even if they’re not back in the classrooms on account of Pandemic Panic, these ‘America is Racist’ themes will be pushed out in virtual form, to complement the near constant onslaught of such themes from popular culture and corporate America.

Notably, the two pressures together — insufferable school closures and insufferable Woke indoctrination standards — maybe the biggest things going for school choice in North Carolina. If this doesn’t convince people that we need more choice in education, what will?