Login to Send a Private Message to Stan Deatherage
Former President Trump, suffering the "slings and arrows" of hate, free lance abuse and the Democratic Socialist "Resistance" to all things relative to common sense for 4 straight years, is acquitted of his record second Impeachment ... this time as an ex-president. 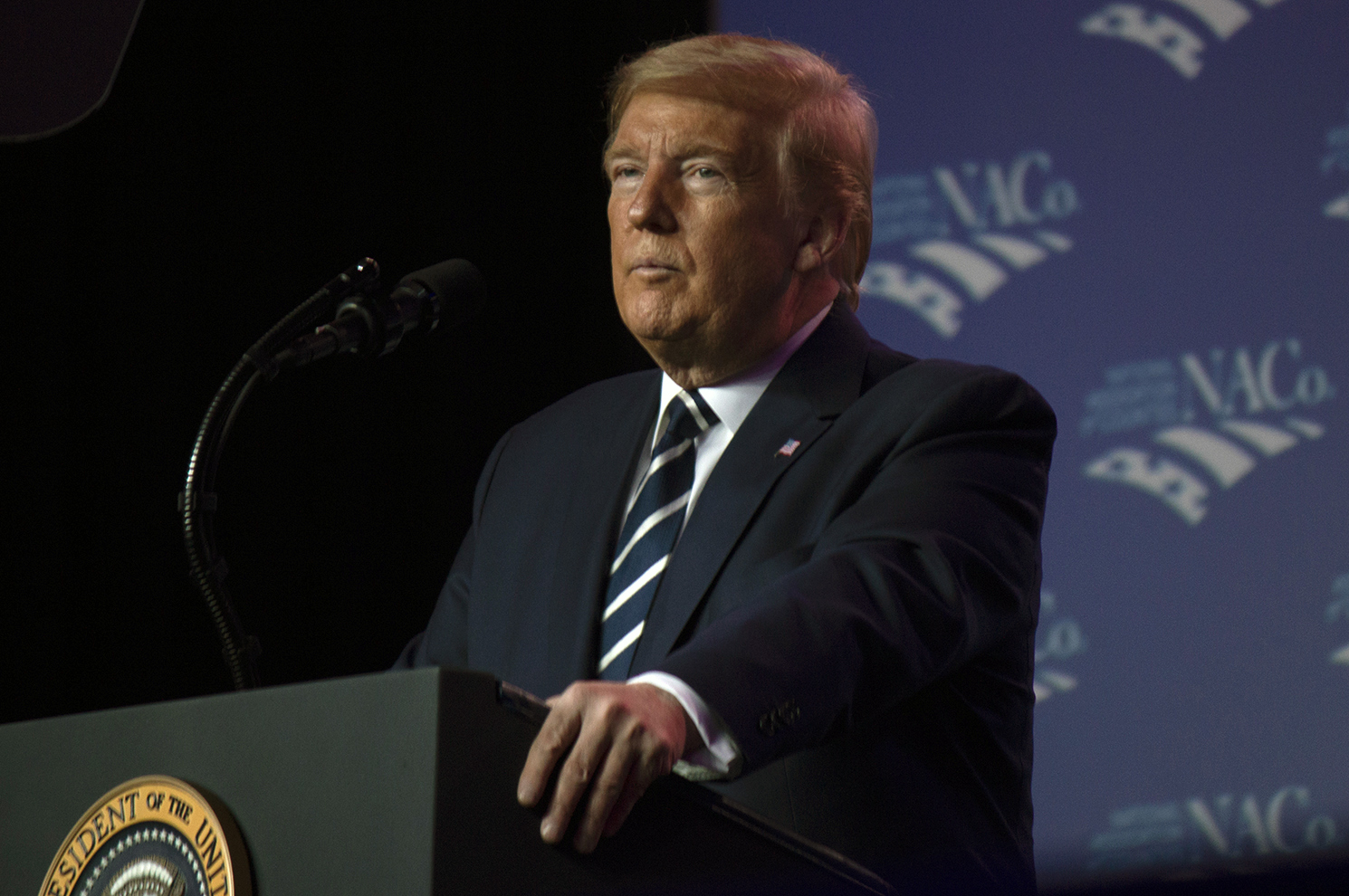 President Trump at the NACo Conference, speaking to the county commissioners, in early March 2021 (in the days before the Democratic Socialists' politicization of Covid), about governing the real America of patriots: Above.    photo by Stan Deatherage    Click image to expand.

It was a historic moment in the presidential history of this public, and I was determined to try to make some sense of it even though the more I witnessed these proceedings, the more I found them utterly senseless until there was a wee bit of logic of the real emanating in low pulses from the defense team headed up by Michael Van der Veen, David Schoen, and Bruce Castor.

President Trump's lead defense attorney, Michael Van der Veen, tells the truth about what he has, sadly, only so recently learned to be true about the undignified Democratic Socialist Propagandist Media: Above.

After a rocky start on Thursday in the well of the U.S. Senate, where Attorney Castor led with a rambling collegial message that meandered to a pointless conclusion, associate David Schoen sped up the attack and made some points, but the dye was already cast that Thursday was a wasted effort. By contrast, the House Managers, while weak on substance and any gravitas born by integrity, they were practiced on delivery, which well impressed their 5th column - the Democratic Socialist Propagandist Media, Orwellian in Scope, which in turn served them well as a convoluted feed back loop of professional encouragement to drone on and on, ad nauseam; thus, serving as a resource to provide ample ammunition to Mr. Trump's defense team, regardless of how hapless Mr. Trump's team might have appeared on Thursday. Friday's presentation of purposeful defense of President Trump was on point and powerful.

After the long winded opening statements on Thursday from the Democratic Socialist House Managers, including a presentation from the Chinese Spy Sympathizer, Eric Swalwell of California; all before the less than stellar, albeit far shorter opening presentations by the Trump defense team, Friday's presentation of evidence in support of Mr. Trump was a firm turn-about, and most effective in measure and tone.

While the House Managers continued to blame all the woes of the June 6th (2021) Storming of the Capitol on one "Donald John Trump", the Trump defense team took a more streamlined and effective path, presenting the very words of the House Impeachment Managers juxtaposed against well produced edited videos showcasing the political word choices of not only the House Managers as politicians, but also every major Democratic Socialist politician, including Open Borders Joe and his Socialist Sidekick, Kamala Harris, to minimize them as real and reasonable people; thus presenting their ongoing Grand Hypocrisy of just what it means to be the unmitigated Hypocrite. Think about that aforementioned premise: Why would any politician set as the purpose of a lone article of Impeachment the excessive political Speech of another politician, adversarial or not?

These are the videos that told a finer truth than the colluded Propagandist Media and the hypocrites of Democratic Socialist party: Above.

Understanding the ludicrous nature of the Democratic Socialists' one argument for Impeachment, the Trump defense team needed just a fraction of their time allotted to rebut the exposed House Managers, and handily eviscerated their well presented but pathetic argument, even coining the efforts of the Democratic Socialist House Managers, led by Jamie Raskin as the "Raskin Doctrine", which is supplied here below:

Evolving as the star of the Trump Defense team, as lead attorney, was Michael Van Der Veen, who employed a forceful and accurate defense, tinged with an unreserved incredulity to pound the House Manager Fools, whose hate for former president Trump is only exceeded by their continued challenge to remake America into Socialist monolith, and then manage its decline - in historical terms, the destruction of our Republic.

On Saturday, the House Managers continued their whining prosecution, expending as much time as allowed, even threatening to call a witness at the last minute. Michael Van Der Veen, who tempered what anger management he could muster, sparingly but forcefully wrapped up the defense of Donald J. Trump, by promising as many as a hundred witnesses deposed in opposition to these ridiculous Democratic Socialist hijinks.

After long deliberations by both sides, there was a compromise on witnesses, then there was the vote by the full U.S. Senate on the Impeachment of former President Donald John Trump:

In conclusion of this sorry mess perpetrated against the American public, there were 50 votes in complete unanimity amongst the Hypocrite Party (Democratic Socialists all) for guilty; Joined by 7 RINOs in their constitutional capacity to vote for the guilt of former President Trump, and they will now be named - Ben Sasse, Nebraska; Susan Collins, Maine; Bill Cassidy, Louisiana; Lisa Murkowski, Alaska; Mitt Romney, Utah; Pat Toomey, Pennsylvania, and RINO Richard Burr, North Carolina; then, thankfully, 43 Republicans, patriots all, voted to acquit by voting not guilty in the defense of the best president America has known since President Ronald Wilson Reagan.

In conclusion, it is done. President Trump is acquitted and should he elect to run for his second term, he is more than qualified to do so.

If there is one issue that I can agree with these non patriot Democratic Socialists is that former President Donald J. Trump, and what and who he represents, will be the bane of those non patriots who duly wish to destroy our Constitutional Republic, and govern within the construct of One Party Rule.