The Equality Act is a push for ideological submission, not civil rights | Beaufort County Now | None are so blind as those who will not see

The Equality Act is a push for ideological submission, not civil rights 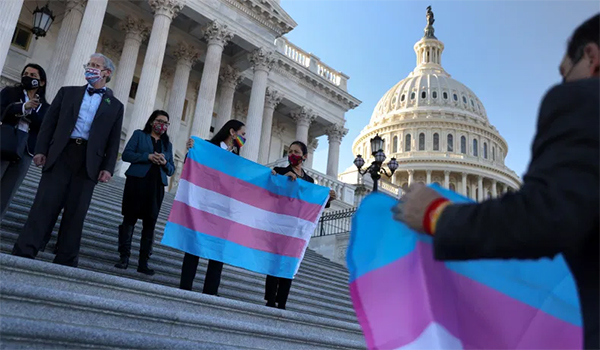 Imagine feeling so alienated from your body that you would consider taking cross-sex hormones and removing your genitals. That’s the tragic situation that many people with gender dysphoria experience. They aren’t faking it, and they didn’t actively choose it.”

That’s how a recent op-ed from Ryan T. Anderson began. And it is in the compassionate spirit of his book When Harry Became Sally: Responding to the Transgender Moment, which has been recently banned at Amazon. In the postscript to the paperback edition, Anderson recalls an event he hosted while at the Heritage Foundation, his home until his recent move to the Ethics and Public Policy Center, where he serves as president. It was in January 2019 — “The Inequality of the Equality Act: Concerns from the Left.”

You may be quite familiar with the fact that Heritage is not a think tank of the Left, but quite conservative. And the truth is that this issue of gender dysphoria is uniting people of all political stripes. As it should. I recently watched on Twitter as people on the Left expressed regret that they had to link to a post, by my courageous and tenacious colleague Madeleine Kearns, on National Review’s website because no one else will write about these issues honestly. Maddy was writing about the Senate confirmation hearings for Department of Health and Human Services official Rachel Levine. Rand Paul asked Levine some very basic questions about children and gender transitioning. Should the government intervene against the wishes of parents when a child wants to change genders? Levine refused to answer. That’s a pretty shocking question to refuse to answer. And Paul was characterized widely as transphobic for the line of questioning. No, he was being a responsible representative of the American people, asking a critical question. And surely the reason he was accused of being transphobic was not simply that he questioned a nominee who was born as a man and now identifies as a woman?

In the case of Anderson’s forum, he had been asked to host it because no one on the left would. As he writes in the postscript of the paperback edition of When Harry Became Sally:

One of the organizers needed to remain anonymous, because she has a teenage daughter who was four years into the process of transitioning. Throughout that time, she’s been trying to get left-leaning media and think tanks and professional associations to take seriously the concerns coming from the left about transgender policy, and instead she’s found herself and her colleagues essentially deplatformed.

As Ryan noted, “we likely disagree about abortion, gay marriage, taxes, trade, foreign policy — just to name a few. And that’s OK.” He continued: “Just because we disagree about some things, even many things, that does not mean we disagree about everything. And where we do agree, we can and should work together. Addition and multiplication. Not division and distraction.”

There’s room for common ground here. Consider the very name of the Equality Act, which would add “gender identity” and “sexual orientation” to the classes protected under the Civil Rights Act of 1964. While I have no interest in discriminating against anyone, we’re at a moment when the media and so much of the Democratic Party, corporate world, and popular culture consider affirming transgender ideology a tenet of secular faith. Specifically, with respect to the media, Anderson writes:

People on the right are often disparaged as anti-science on, for example, abortion. That always seems to be quite bizarre and outright dishonest, since we can see on a sonogram what we are dealing with in a pregnancy — a developing human. But since the sexual revolution and the expectation that women live more like men, the “unplanned” pregnancies that are an inevitable result of that meant that some solution had to be found. So we convince all the young women — many of them black, by the way — that they are not mothers when they are pregnant, and the law and the social pressure they feel gives them permission and even encouragement not to think about the reality of what they are doing. Activists insist they shout their abortion instead of offering them help and healing, as the Sisters of Life do — who want to help you have your baby and be a mother, but also love you after you’ve had an abortion and are looking for reconciliation with God once you’ve confronted and suffered what that abortion was: the death of your child. Culture says it’s a choice. Freedom. Health care. For too many, it is none of those things.

And now we are talking about mutilating children. My heart breaks for those who are legitimately suffering gender dysphoria. As with many hardships I don’t suffer, I well know that there but by the grace of God go I. But when we glamorize transitioning and encourage children to do so, we are talking child abuse. Biological boys playing on girls’ teams? Foster-care and adoption services banished for having traditional views that Barack Obama and Joe Biden and all of mainstream America believed about ten seconds ago, relatively speaking? Can we please unite together against ideological tyranny here? Care about Ryan T. Anderson’s book being banned on Amazon, because it’s going to be you not submitting in some way or some form soon if this Equality Act passes.