"Inclusiveness": Dumbing down the schools 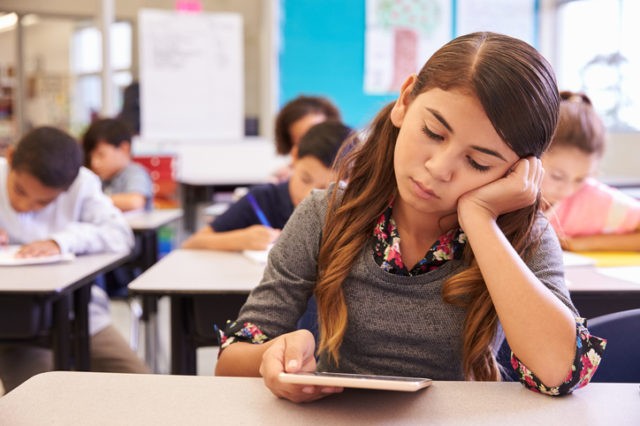 The Virginia Department of Education (VDOE) is taking steps to only offer accelerated math classes to student in 11th and 12th grade — a move critics say will prevent some students to excel earlier in their academic career.

Loudoun County School Board member Ian Serotkin posted about the change on his Facebook page Tuesday:

During last night’s Curriculum & Instruction Committee meeting, we received a briefing from staff on the Virginia Mathematics Pathways Initiative (VMPI), a sweeping initiative by the Virginia Department of Education to revamp the K-12 math curriculum statewide over the next few years.

There are some noble goals with this initiative – it provides a pathway for every student to be able to take calculus or higher math by the end of high school if they so choose.  That is a very good thing, and eliminates a major problem we have currently of students being “locked in” to their math track and being unable to get to calculus later on if they weren’t sufficiently accelerated in middle school.

My first reaction to this was that it seemed absolutely bananas, and that it sets a soft cap on the number of higher math courses students are going to be able to take.  My second reaction was to wonder which outside math learning franchises (Kaplan, Mathnasium, etc.) are publicly traded, because I foresee their stock soaring.

I’ve asked for this to be an information item at next week’s board meeting to communicate this more broadly with other board members and the community. There is also a series of information sessions run by the VDOE for parents wishing to learn more.

Fox News reported on the development:

VDOE spokesperson Charles Pyle indicated to Fox News that the courses would allow for at least some variation depending on students’ skill level. “Differentiated instruction means providing instruction that is catered to the learning needs of each child (appropriate levels of challenge and academic rigor),” Pyle said.

On VDOE’s website, the state features an infographic that indicates VMPI would require “concepts” courses for each grade level. It states various goals like “[i]mprove equity in mathematics learning opportunities,” “[e]mpower students to be active participants in a quantitative world,” and “[i]dentify K-12 mathematics pathways that support future success.”

During a webinar posted on YouTube in December, a member of the “essential concepts” committee claimed that the new framework would exclude traditional classes like Algebra 1 and Geometry.

“Let me be totally clear, we are talking about taking Algebra 1, Geometry, Algebra 2 – those three courses that we’ve known and loved … and removing them from our high school mathematics program, replacing them with essential concepts for grade eight, nine, and 10,” Ian Shenk, math curriculum specialist said in the Fox report.

Shenk said that the concepts courses would not eliminate algebraic ideas altogether but would rather interweave multiple strands of mathematics throughout the courses, including data analysis, mathematical modeling, functions and algebra, spatial reasoning, and probability.

“The changes were just the latest of many to prompt concern from parents in the state, which has seen in-fighting over controversial ideas surrounding equity and race,” Fox reported. “A Loudoun parent who spoke on the condition of anonymity worried that the changes would ‘lower standards for all students in the name of equity.’”

“These changes will have a profound impact on students who excel in STEM related curriculum, weakening our country’s ability to compete in a global marketplace for years to come,” the parent said.

Ian Prior, a Loudoun parent and former Trump administration official, said the plan would “stifle advancement for gifted students and set them back as they prepare for advanced mathematics in college.”

“This is critical race theory in action and parents should be outraged,” Prior said.

Fox News published some of a statement it received from Pyle that called the changes a way to achieve “deeper learning”:

For many years, parents and the system have valued and rewarded speed via acceleration and ‘covering content’ rather than depth of understanding. The Virginia Mathematics Pathway Initiative shifts to a focus on and value for deeper learning through differentiated instruction on grade level that will promote student development of critical thinking, authentic application and problem solving skills.

Offering an inclusive learning environment that engages and challenges students of varied levels of understanding and different interests will be a focus of the common mathematics pathways proposed in grades K-10 … These pathways seek to restructure mathematics education by focusing instruction on reasoning, real world problem solving, communication and connections while shifting away from an emphasis on computation and routine problem practice.

VMPI implementation teams continue to work on addressing these considerations while moving forward to improve equity in mathematics opportunities for all students. VMPI Community meetings being offered this spring are intended to provide initial information regarding the initiative, but also be a venue in which feedback can be collected.