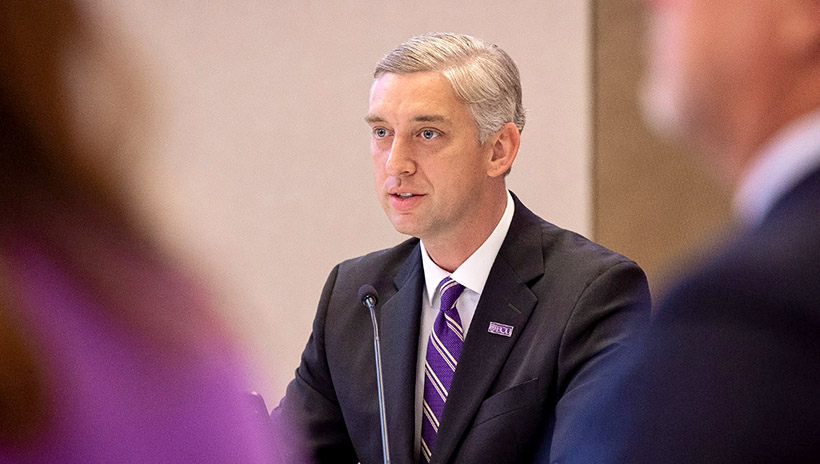 Dr. Philip Rogers announced the launch of a listening tour during his first Board of Trustees meeting as ECU chancellor. | Photo: Cliff Hollis 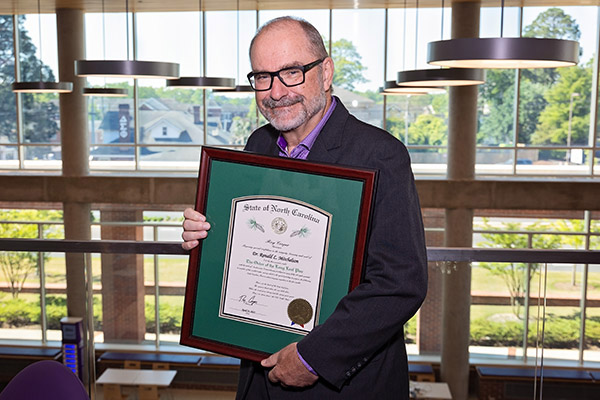 Dr. Ron Mitchelson, former interim chancellor, was presented with the Order of the Long Leaf Pine, the highest honor awarded by the governor of North Carolina, during the ECU Board of Trustees meeting. | Photo: Cliff Hollis
The East Carolina University Board of Trustees welcomed ECU Chancellor Dr. Philip Rogers to his first meeting of the full board and its committees Thursday and Friday.

"I want to say publicly that I'm grateful to this board in particular for your overwhelming support during this transition and for your unwavering commitment to East Carolina University," Rogers said during his remarks to the board.

Rogers announced the launch of a listening tour called Pirate Perspectives. "I plan to spend the next few months engaging directly with a broader range of ECU constituents to hear their individual perspectives and ultimately to drive action," he said.

The board also accepted the report of the naming standards committee. BOT Chair Vern Davenport said the board, with its new members as of the next meeting and a new chancellor in place, should engage in a comprehensive look at ECU's history and its present in the context of race, diversity and equity.

"In the life of a university names on building are but one part of a larger conversation," he said. "We cannot lose sight of how this institution began ... and just how far we've come in 114 years."

Rogers agreed and said ECU is not alone in considering such issues. "The naming conversation ... is part of the broader expectation that higher education institutions be a leader in bringing our society together to tackle the most challenging problems," he said.

Rogers commended the university for its efforts to improve diversity and inclusion, but said there is hard work to be done, acknowledging the gap between the diversity of ECU's student body, faculty and staff compared to the region it serves. 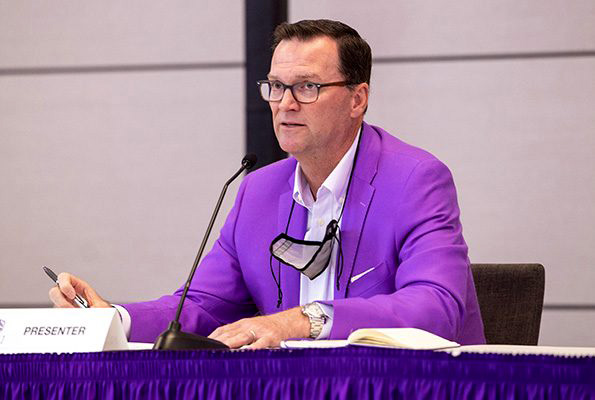 Jon Gilbert, director of athletics speaks to members of the BOT during the Athletics and Advancement committee meeting Thursday, April 22. | Photo: Rhett Butler
"I want the broadest set of constituencies across Pirate Nation to engage in a collaborative and comprehensive effort in addressing issues of race, diversity, inclusion and social justice at ECU. We must continue to get comfortable with having the hard conversations that make us uncomfortable as we develop pathways to healing," Rogers said. "Together we can take a holistic approach as we seek to bring meaningful change to our campus."

He said he envisions a three-part process of completing a historical analysis of ECU, authentically assessing its current reality and setting a vision for the future.

"The naming conversation is one important part of this conversation and I hope we can expand the dialogue further to drive even more intentional outcomes," he said.

During the board meeting, the board approved resolutions honoring outgoing board members Davenport, Max Ray Joyner Jr., Bob Plybon and ECU Student Government Association President Tucker Robbins, as well as Dr. Ron Mitchelson, former interim chancellor, who was presented with the Order of the Long Leaf Pine, the highest honor awarded by the governor of North Carolina.

"When this chapter of ECU's history is written, Dr. Mitchelson's tenure will be viewed most favorably," Davenport said. "Throughout his career at ECU he has always answered the call to serve our students, our faculty, our staff and our region."

Davenport also welcomed two new board members who will be sworn in at the board's next meeting July 22. The new trustees are Cassandra Burt of Emerald Isle and David G. Fussell Jr. of Duplin County. Current members Jason Poole and Fielding Miller were reappointed to two-year terms on the board. All four were appointed by the UNC Board of Governors earlier this week.

Burt worked for Hastings Ford in Greenville for 28 years, and since retiring has devoted time to several organizations including the Petty Family Foundation and the American Heart Association. She currently sits on the ECU Medical & Health Sciences Foundation board and the donor relations committee. She is also involved with the ECU Pirate Club.

Fussell majored in economics at ECU, graduating in 1990 and joining his family's business, Duplin Winery. At ECU, Fussell has served on the board of directors of the ECU Alumni Association and ECU Foundation. After a four-year sabbatical, Fussell was again appointed to the foundation board in 2020. Fussell is also a member of the ECU Pirate Club.