Biden's gas lines have already hit the USA | Beaufort County Now | Sleepy Joe has let this nation be attacked, worse still he's done nothing about it 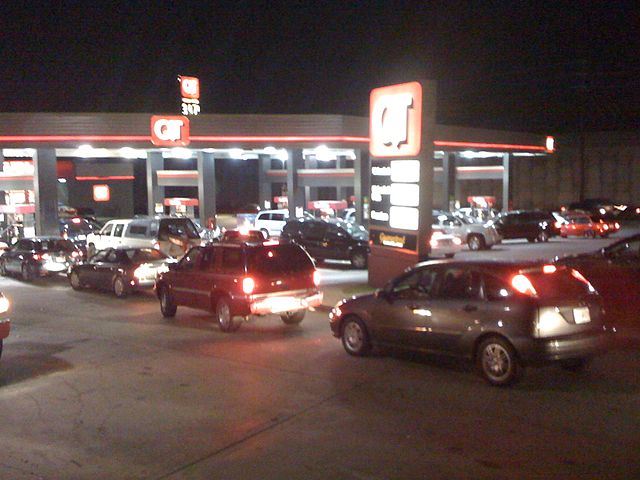 Biden's spokesperson says, in essence:  It's not our responsibility to protect the nation's gas supply, it's all on private corporations.  Bull.  Unmitigated BS.

Here's the latest from the bizpacreview.com?

Following the Colonial Pipeline cyberattack that shut down roughly 45 percent of the east coast’s fuel supply, long lines are forming as gas stations run dry, panic sets in, and a state of emergency has been declared in North Carolina.

Gas stations in Florida, Georgia, and Virginia are closing their pumps due to the fuel shortage and prices are expected to rise dramatically if the company cannot get the pipeline back online and fast.

President Joe Biden has loosened the regulations on truckers so they can bring in more fuel. American Airlines is reportedly adding stops to at least two of its long-haul flights from the Charlotte, North Carolina hub as well.

The cyberattack took place last Friday evening, shutting down the 5,500-mile pipeline. Biden was not briefed on it until Saturday. It appears that the ransomware attack was launched by a Russian-based group called DarkSide. There is no word if negotiations are taking place or if the ransom has been paid, the Daily Mail reported.

Colonial Pipeline was not the only company hit in the attack. At least 24 other companies spanning a range of industries were also subjected to the intrusion. Some are calling the attack an act of war and Newt Gingrich, the former Speaker of the House, went so far as to call for the execution of those responsible.

“On the national security part, we ought to pass a law immediately that makes this kind of hacking subject to a death penalty and the law should include a provision that the president, through a judicial process, should be able to order the killings of anybody overseas who is doing this,” he remarked to Sean Hannity on Fox News. “It’s an act of war against the United States to do stuff like this.”

“A great country can’t allow people to savage it and have no consequences and wait for the next attack,” Gingrich noted. “And yet that literally is where we are.”

The pipeline supplies Atlanta’s airport which has the most passenger traffic in the world. It also serves 90 U.S. military installations as well as 26 oil refineries.

Long lines at gas stations started forming Monday evening as pumps began to go dry in various states. Shortages were confirmed in the Atlanta area and in Tallahassee, Florida. Patrick de Haan from Gas Buddy noted that five percent of gas stations in Virginia have already run out of gas.

AAA is now predicting that gas prices could jump in Georgia three to seven cents a gallon this week and gasoline will be limited. There is no talk of rationing yet, but is a possibility.

North Carolina Governor Roy Cooper declared a state of emergency to help residents in his state prepare for possible shortages: “Today’s emergency declaration will help North Carolina prepare for any potential motor vehicle fuel supply interruptions across the state and ensure motorists are able to have access to fuel,” he stated.

In Atlanta, some motorists reportedly had to go to several separate gas stations to fill up their tanks.

“Gas stations around Atlanta are running out of gas and the ones that have it are hiking up the prices,” tweeted one motorist.

Another warned: “Y’all better go and fill up on gas Atlanta. I finally got gas after trying at 3 gas stations.”

And a third man reported: “I went to three gas stations and they were out of gas. Hope to make it to one with gas before my car stop.”

The pipeline is the largest in the United States and reportedly handles more than 100 million gallons of fuel daily between Texas and New Jersey. Stored supplies are already reportedly running out in numerous states.

DarkSide posted an apology on the Dark Web Monday, according to Vice. They claimed they did not want “social consequences,” or to make a political statement.

“We are apolitical, we do not participate in geopolitics, do not need to tie us with a defined government and look for other our motives,” they declared.

“Our goal is to make money and not creating problems for society,” the group proclaimed.

“From today, we introduce moderation and check each company that our partners want to encrypt to avoid social consequences in the future,” DarkSide promised.

DarkSide emerged in August of 2020 and they claim they don’t attack medical, educational, or government targets. The group allegedly only goes after large corporations. They donate a portion of what they steal to charity.

DarkSide harvests data from a victim’s server, then they encrypt it and proceed to request a ransom. The group uploads the data to a website on the Dark Web, which then publishes it if they don’t receive the ransom.

Darkside has advertised stolen documents from over 80 companies located across the U.S. and Europe on its website.

The Russians are denying any involvement in the attack: “We categorically reject the baseless fabrications of individual journalists and reiterate that Russia does not conduct ‘malicious’ activity in the virtual space.”

Although Colonial is stating that they are aiming to restore services by the end of this week, there is no guarantee of that. The national price of gas has already spiked by six cents to an average of $2.96 a gallon. And it is expected to get much worse before it gets better.

Biden is rumored to be meeting with Russia’s President Vladimir Putin. Biden says there is no evidence that Russia is at fault although DarkSide is said by cyber experts to be located in Russia and seems to operate freely from there.

“This could be the most impactful ransomware attack in history, a cyber disaster turning into a real-world catastrophe,” Andrew Rubin, who is the CEO and co-founder of cybersecurity firm Illumio told NBC News.

“It’s an absolute nightmare, and it’s a recurring nightmare. Organizations continue to rely and invest entirely on detection as if they can stop all breaches from happening. But this approach misses attacks over and over again. Before the next inevitable breach, the president and Congress need to take action on our broken security model,” he warned.

The pipeline is described as the “jugular of infrastructure” in the United States.

Americans expressed alarm and distrust on social media, and a lot of it was directed at Biden: