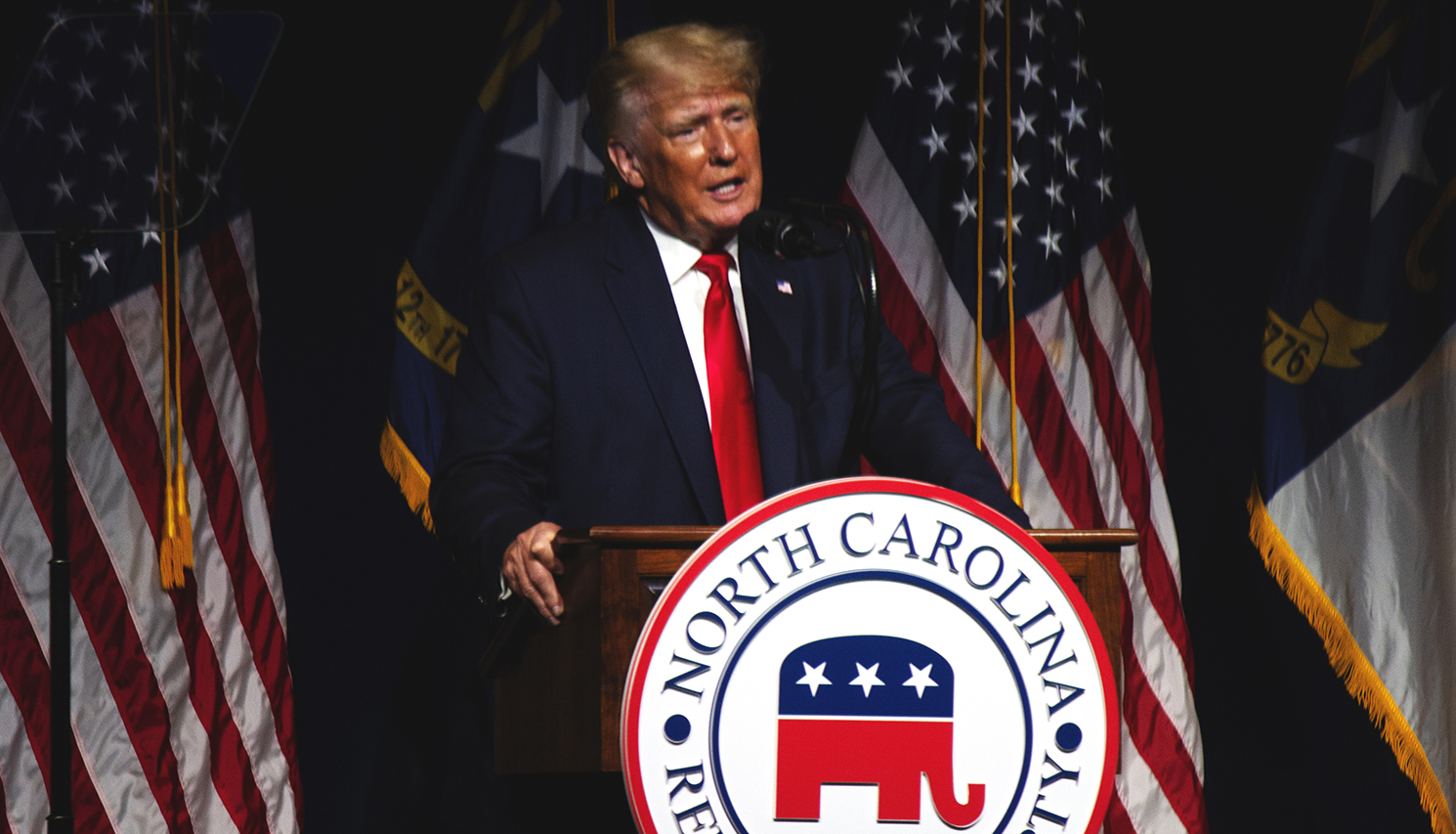 Former President Donald Trump gives his real assessment of the Republic's predicament to the packed ballroom at the NC GOP Convention in Greenville, North Carolina, June 5, 2021: Above.     photo by Stan Deatherage     Click image to expand.

We know that former President Trump would stand up against Domestic Marxists, and that he would take a stand against an adversarial China, but will it take him getting elected once again to have a leader who is capable of such political courage?

Former President Donald Trump spoke as honestly as any good politician is capable of to an enthusiastically ecstatic crowd of mostly North Carolina Republicans in Greenville, North Carolina, and big news was made; news that will reverberate now, and shall continue through the 2024 general election. The event held here in eastern North Carolina, held by the North Carolina GOP as its greatest fundraiser in its history, was information rich as well as entertaining.

The first monumental informative tidbit was concerning eastern North Carolina native Lara Trump, the odds-on-favorite to win the Republican nomination to seek the U.S. Senate seat, currently held by Senator Richard Burr (conspicuously not in attendance), will not seek the nomination. The second "shoe to drop" relative to that notable announcement is that this extra popular president will endorse political newcomer Representative Ted Budd from western North Carolina. Awkwardly, that announcement of support by President Trump was made with U.S. Senate candidates former U.S. Representative Mark Walker in the big room, along with former North Carolina governor Pat McCrory in attendance. I know this of these declared candidates being there, because I unmistakably saw one and spoke to the other. 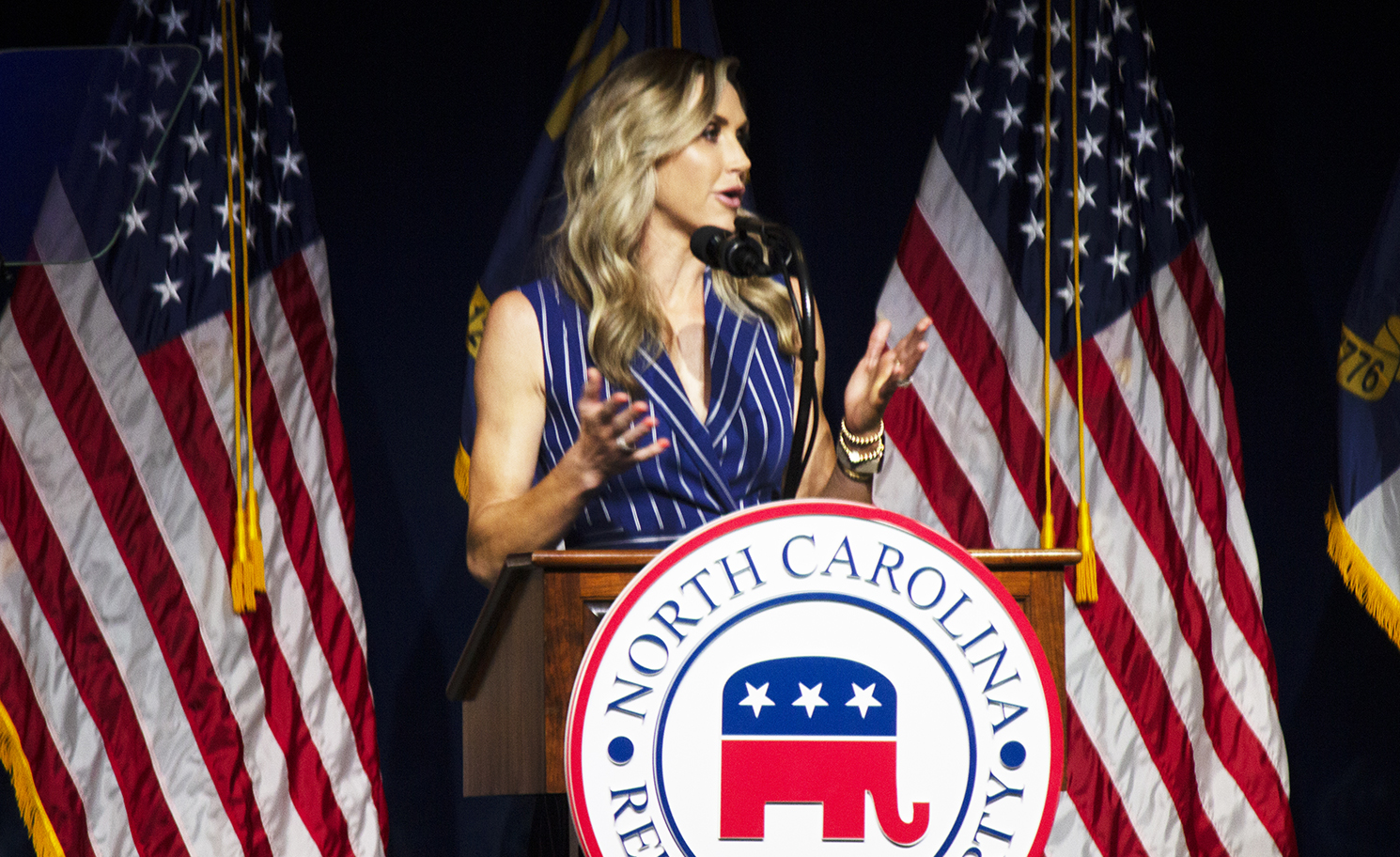 Lara Trump, president Donald Trump's daughter-in-law, a true 'chip off of the Trump block' announces: "Because of my commitment as a mother to two young children, I am saying Not Now, but I'm also not saying Not Ever to seeking elected office in my beloved home state of North Carolina": Above.     photo by Stan Deatherage     Click image to expand.

A second large nugget of news is that if Mr. Trump had left a crack in the door as to whether he would run to regain his rightful place in the White House, on Saturday night here in Greenville he kicked that door nearly wide open, if by no other conjecture, his many full throated, well developed and extra-knowledgeable opinions of how our Republic should wisely move forward from the mire and the muck of an already too long of a time under the guidance of this current Imposter, this Fool, arguably America's First Idiot President. 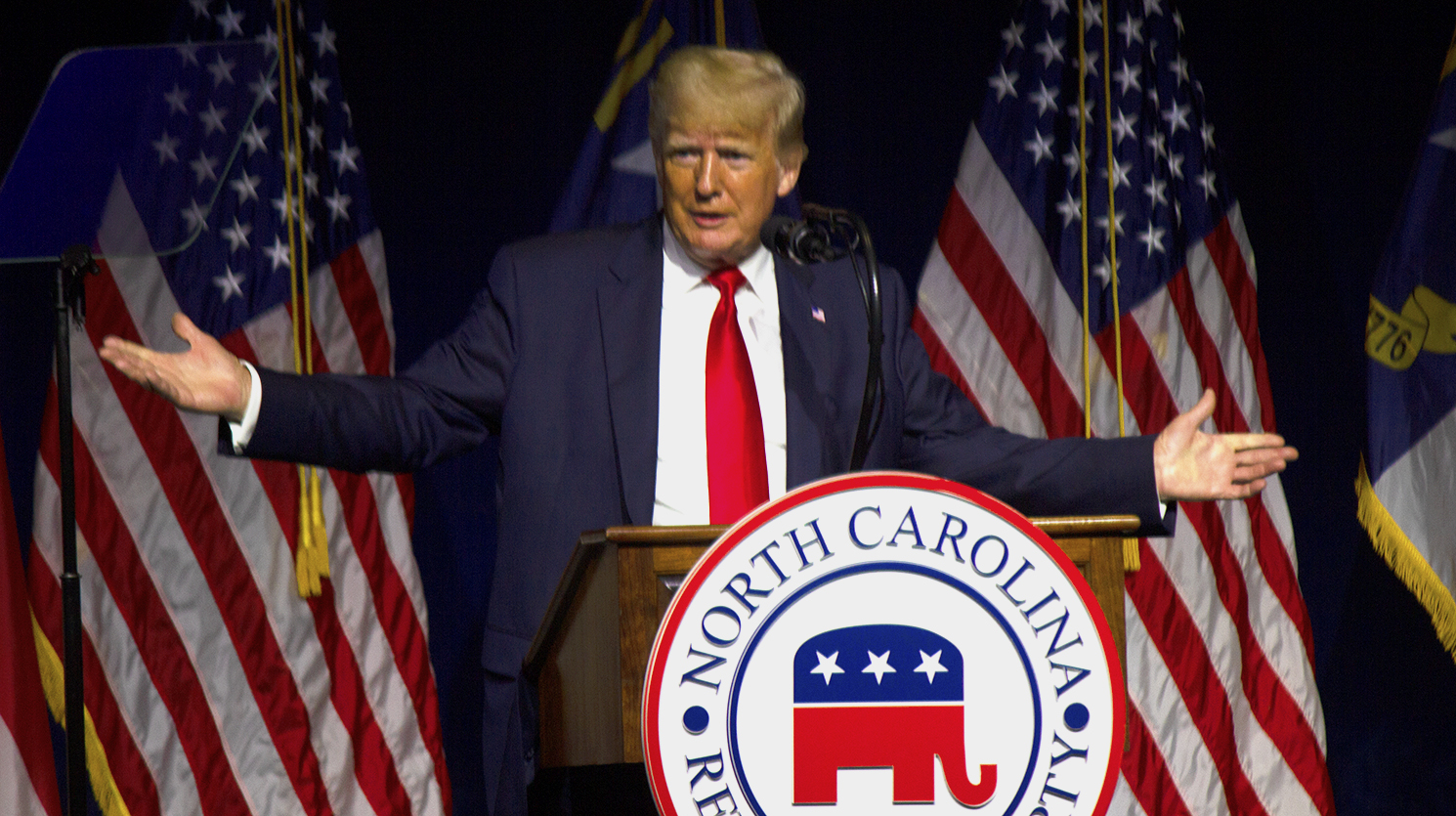 President Trump knows what it takes to be a Real President, and his incredulity regarding the current Imposter President will always be evidentiary in expression of his truths regarding his public calling: Above.     photo by Stan Deatherage     Click image to expand.


The third biggest piece of news announced by the former president was when he proffered that the United States and the World were significantly damaged by the Pandemic, and it was a very distinct possibility that Covid19, or as the president professed, 'I like to be exact as a I speak, so I like to call it the China Flu', and that those responsible for allowing the virus to escape from a Wuhan laboratory should pay reparations to the United States and the World. In the case of the United States, the former president offered that this damaged Republic should seek remedy by refusing to repay China for the trillions of dollars that are now owed in respect to the U.S. treasury bills China has purchased.

In the response to such a demand for this reparation from China for their large and complicit part in such a large toll regarding the loss of life, and quality of life to our Representative Republic, Mr. Trump truly threw down the gauntlet, and did so with the same conviction that he would solve the Southern Border Crisis in 2016, which he did effectively do as President, even in the face of the Democratic Socialists' strident demand for open borders, and for all affected to thereby disobey all laws respecting our nation's sovereignty. Mr. Trump's great conviction then, regarding Illegal Immigration vs our Constitutional Republic's sovereignty, was similar to the great conviction that he expressed Saturday night in Greenville regarding China's hostile act toward the United States, and the World, in unleashing the human modified virus upon an unsuspecting people, and repayment should, and would be demanded. In this reporter's opinion, these words by Mr. Trump sounded as if this projected, and very bold foreign policy initiative against the Chinese Communist Party could well be an intractable political plank of a former leader once again, in our very near future, providing real leadership , ergo a Trump candidacy to return to finish what he started - "Make America Great Again" ... even if it creates a future conflict with our greatest adversary - China.