What's dumber than CRT? CNN | Beaufort County Now | Ann Coulter breaks it down for the Left 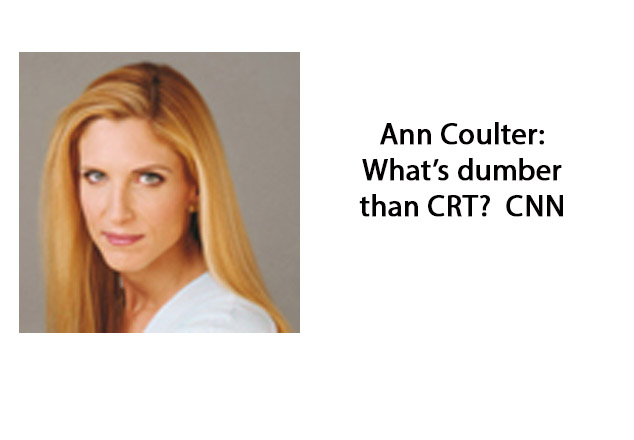 Ann Coulter offers us another classic for the Looney Left.

As we discussed last week, “critical race theory” is a subtle philosophical construct where the answer to everything is: THAT’S RACIST! Teachers hawking this glop are being defended by their journalist allies, who sneer that CRT critics are too stupid to understand the nuances of the theory.

The Aristotelian ideal of this sneer was Elle Reeve’s “special report” for CNN — pre-taped to eliminate any danger of Elle being contradicted by someone smarter, such as a 10-year-old.

CNN’s Brianna Keilar introduced the segment by asking her: “Do these vocal opponents of critical race theory actually understand fully what it is?”

Elle: “No.” [Bored] “And why should they? It’s an academic theory taught mostly at the grad student level. But what they think it means is teaching white kids that all white people are bad and racist. And so, of course they’re afraid of that.”

Parents aren’t “afraid”; they’re incensed. They’re paying the salaries of people who spend all day telling their kids that America is racist. (Elle didn’t give that explanation. Perhaps it frightens her.)

The “vocal opponents” of CRT who “don’t actually understand fully what it is” seem to be mostly billionaire investment bankers — at least judging by the articles in the Daily Mail. Elle’s conclusion: A “theory” that consists of going around shouting “RACISM!” is too complex for those guys to understand.

The format of Elle’s pre-taped report consisted of her interviewing opponents of CRT … then nailing them with her brilliant comebacks! Except even with CNN doing the editing, the CRT opponents sounded perfectly reasonable, while Elle’s comebacks kept revealing her yawning stupidity.

About 60 seconds later, Elle deferentially asks a hijab-wearing high school teacher to explain CRT. The teacher exclaims: “Race and racism is literally the building blocks of this country!” (Were I the editor of Elle’s piece, I think I would have cut that part of her answer.)

Next, Elle talks to a parent fighting CRT, who says: “Don’t force on our kids a particular worldview. Taking a wide brush and painting this country as structurally racist, it’s insane … it’s a lie.”

To this, Elle patronizingly informs the parent that America’s racism “isn’t distant history.” Her evidence of contemporary racism? “In the ’90s, the crime bill gave much more severe sentencing to crack cocaine versus powder cocaine simply because black people were perceived as doing crack cocaine and white people weren’t …”

Black churches, black leaders and black members of Congress were enraged by what the crack epidemic was doing to their neighborhoods. A 1986 New York Times article reported on “all-night vigils” held by the leaders of 60 black churches, who called the crack epidemic “a new form of genocide.” Urban League President John Jacob railed against communities “held hostage by crack dealers,” saying “drugs kill more blacks than the (Ku Klux) Klan ever did.” Running for president in 1988, Jesse Jackson spoke of the scourge of crack cocaine and told a cheering crowd, “When I become president, the drug pusher is in trouble.”

This has been patiently explained roughly 1 million times. But why bother knowing stuff when smug arrogance is good enough for CNN?

Elle’s next big “gotcha” was even more embarrassing, if that is possible. She rolled out the old chestnut about blacks being considered “three-fifths” of a human being in our Constitution. Yes, she really did that.

Here’s her exchange with a college Republican:

COLLEGE REPUBLICAN: To paint the country as an inherently racist country from its founding I think is dangerous.

REEVE: The three-fifths compromise is written into the Constitution in which slaves are counted as three-fifths of a person.

How can you be in journalism and have no idea what the three-fifths clause means? No research is involved, Elle! Just read it.

The three-fifths clause means exactly the opposite of what Elle thinks it means. This was not a general statement on the slaves’ humanity: It was about congressional apportionment. The slave states wanted to count slaves as full “persons” in order to increase the number of their representatives in Congress.

If you adored slavery, you’d want the Constitution to count each slave as a full person — as 20 people! The slaves still couldn’t vote, but their slave masters would get more votes in Congress. It’s the same idea behind California’s demand that illegal aliens be counted when determining that state’s congressional apportionment.

I can’t even believe there’s anyone in America who needed that explained again. (Next time, I’ll just say: Get a home-schooler to explain it to you, Elle.)

It must have been embarrassing for everyone at CNN to watch this bimbo misstating well-known facts in a network “special report” that was supposed to show what cretins CRT critics are.

So how did the CNN hosts react? They were gobsmacked by the genius of Elle’s report!

JOHN BERMAN: That was so great.

My idea of hell is being condescended to by an idiot, forever and ever, with no respite. In other words, watching CNN.